DOVER AIR FORCE BASE, Del. — President Donald Trump paid respects Thursday to a pair of Army officers who were killed in a helicopter crash in Afghanistan earlier this week.

President Trump and the first lady were among a group of dignitaries, including Chairman of the Joint Chiefs of Staff Mark Milley and National Security Adviser Robert O’Brien, who attended the roughly 12-minute ceremony and watched as six white-gloved members of the Army’s Old Guard carefully handled the flag-draped transfer cases holding the soldiers. 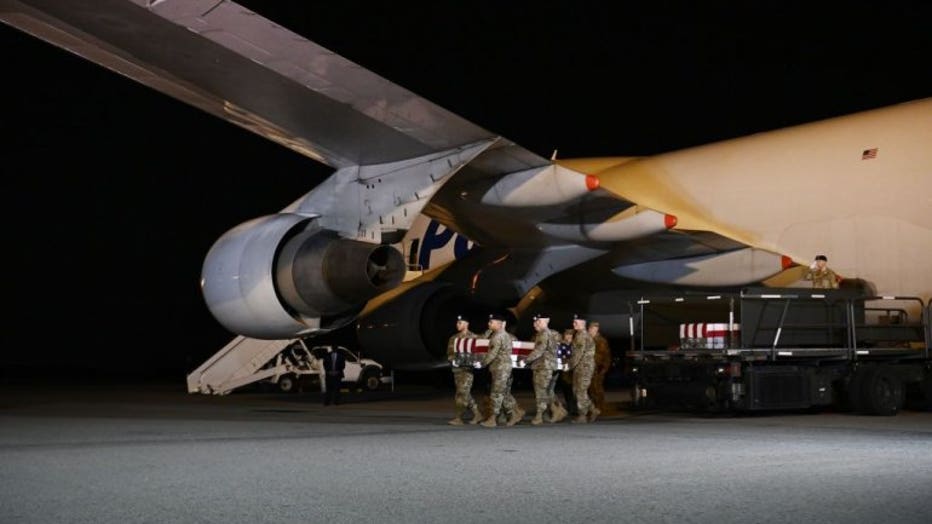 President Trump and Milley saluted the soldiers, while the first lady and O’Brien stood with their hands over their hearts for the dignified transfer of remains.

President Trump has said the responsibility of receiving the remains of fallen U.S. soldiers is “the toughest thing I have to do” as president. 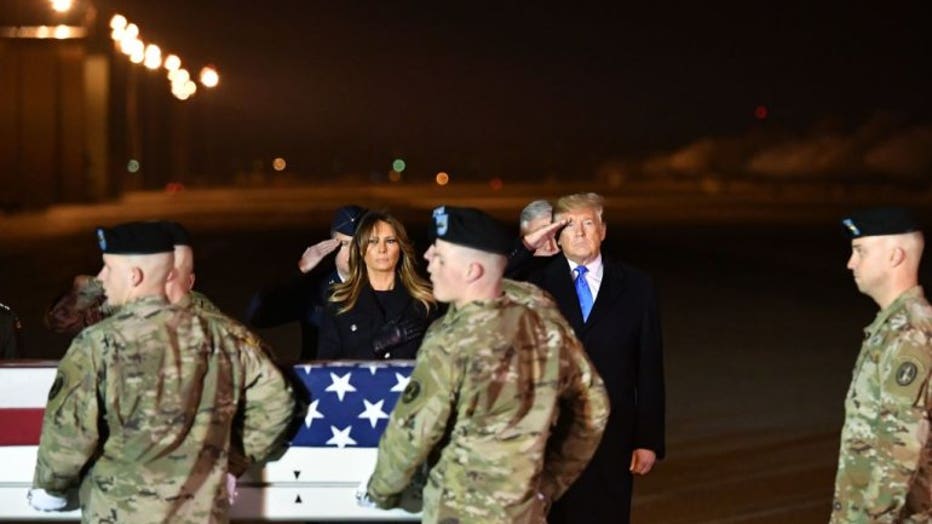 US President Donald Trump and First Lady Melania Trump pay their respects as the remains of Chief Warrant Officer 2 Kirk T. Fuchigami Jr. are carried during a dignified transfer at Dover Air Force Base in Dover, Delaware on November 21, 2019. (Photo

As the final day of public hearings in the House impeachment inquiry wound down, President Trump left the White House for the short flight to Dover Air Force Base in Delaware, where the remains of service members killed abroad are returned to U.S. soil.

Knadle, of Tarrant, Texas, and Fuchigami Jr., of Keaau, Hawaii, died Wednesday when their helicopter crashed as they provided security for troops on the ground in Logar Province in eastern Afghanistan.

Both were assigned to Fort Hood, Texas.

The Taliban claimed responsibility for shooting down the helicopter, but the U.S. military has dismissed that as a false claim. The crash remains under investigation.

President Trump broke off peace talks with the Taliban in September following a bombing in Kabul that killed 12 people, including an American soldier.

The White House said President Trump and Afghan President Ashraf Ghani spoke on the phone Thursday, and both “agreed a reduction in violence is necessary to move the peace process forward” and for all-Afghan negotiations regarding a political settlement to be successful.

White House spokesman Judd Deere said President Trump also thanked Ghani for his support in seeking the release of two Western hostages the Taliban freed this week after holding them in captivity for more than three years.

Last month, as President Trump sought to justify his unpopular decision to remove a small contingent of U.S. service members from northeastern Syria, he began to describe his experiences at Dover and argue for removing the U.S. from “endless wars” in the Middle East, which he campaigned on in the 2016 presidential race.

The president has described the sight of cavernous aircraft pulling up on the base, doors opening, uniformed service members carrying flag-draped “transfer cases” and once-stoic parents breaking down.

“And this is on these endless wars that just never stop,” he said. “And there’s a time and there’s a place, but it’s time to stop.”

Voight said he didn’t meet the families but watched the “moving” ceremony.

The 1979 Oscar winner said he thought “it must be some comfort that their children are cherished by the country.”

“There was no intention of meeting the families or any of that,” Voight said. ”I just wanted to pay my respects, say a little prayer.”

Thursday’s trip was President Trump’s second to the Delaware military base this year, and his third visit there overall as president.

President Trump went to the Delaware base in January 2019 for the return of four Americans who were killed in a suicide bomb attack in Syria.

He attended his first transfer service in February 2017, for the return of a Navy SEAL who was killed during a raid on an al-Qaida compound in Yemen.