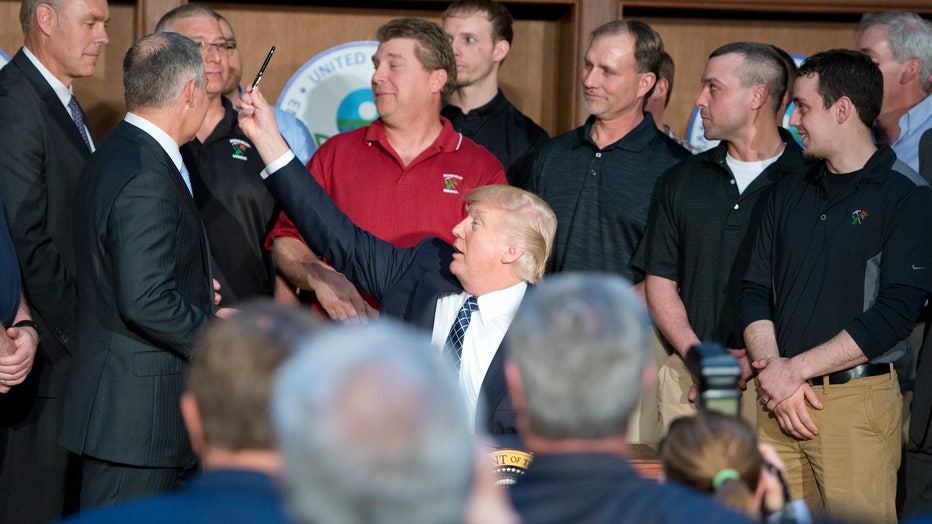 A network of rules on the chopping block

President Donald Trump on Tuesday signed a sweeping executive order rolling back a slate of Obama-era environmental regulations, in a move that will unravel a network of policies intended to cut carbon emissions and curb climate change.

The far-reaching order targets a series of rules implemented under former president Barack Obama, either suspending them directly or putting them up for review. It was billed as a measure to boost domestic energy production by cutting regulations.

“We’re ending the theft of American prosperity and rebuilding our beloved country,” President Trump said at the signing ceremony at the Environmental Protection Agency (EPA) in Washington, flanked by coal miners.

President Trump’s order calls for the immediate evaluation of the Clean Power Plan (CPP), a 2015 rule (that is currently held up in court) that set a national cap on how much pollution existing power plants can produce. The order, which could pave the way for the CPP’s repeal, also lifted a 14-month freeze of new coal mining projects on federal lands.

“You know what it says, right?” President Trump asked one of the miners standing behind him during the ceremony. “You’re going back to work.”

Some regulations the order seeks to kill will take time to phase out. While the order calls for an end to federal rules limiting how much methane emissions oil and gas companies can produce and regulations on the fracking industry, the EPA will need to go through a formal rulemaking process before it can take those off the books.

During his time in office, Obama unveiled numerous executive orders and memoranda designed to curb greenhouse gas emissions and carbon pollution, especially from coal and other energy industries.

His signature climate initiative was the 2015 Clean Power Plan, an ambitious EPA regulation that sought to control how much carbon emissions power plants across the country were producing. It would have created the first-ever national standards for pollution from such plants, with a goal of reducing greenhouse emissions by 32 percent by 2030.

Multiple states, plus mining and electric companies, sued the administration over the rule, claiming the Obama administration overstepped its authority in making such as aggressive policy. The Supreme Court granted a stay on implementing the rule in February 2016, and appeals courts have been grappling with it ever since. More than a year later, the case is still tied up in court.

In 2016, Obama said that he considered his efforts to curb climate change a fundamental part of his legacy, and insisted that he’d continue to fight for the cause even after he left the White House.

“My hope is that maybe as ex-president I can have a little more influence on some of my Republican friends, who I think up until now have been resistant to the science,” he told the New York Times in September.

Meanwhile, President Trump — who has referred to climate change as a “hoax” invented by China — ran on a campaign promise to undo many of Obama’s environmental regulations. He frequently promised to revive the struggling coal industry, and often criticized Obama’s environmental efforts, saying they “killed” coal jobs by burdening the industry with impossible standards.

“It is the last shot for the miners,” President Trump said in August, referencing the November election.

President Trump’s executive order earned high praise from business groups, who insisted on undoing the Obama regulations that they said were stifling the American industry.

But while energy executives also lauded President Trump’s new order Tuesday, at least one suggested it may be more symbolic than a fast-track plan to job growth.

"I cannot tell you how many jobs the executive order is going to create but I can tell you that it provides confidence in this administration’s commitment to the coal industry," Kentucky Coal Association President Tyler White told Reuters.

U.S. coal mines have been downsizing since the mid-1980s, losing workers throughout both Republican and Democratic presidential administrations. At the same time, renewable energy jobs have flourished, as the cost of solar panels and wind turbines have declined. Today there are fewer than 75,000 coal mining jobs in the U.S. — but more than 650,000 renewable energy jobs.

Activists worry that President Trump’s order will undermine years of environmental progress: Even though the Clean Power Plan is tied up in court and not being enforced, about 85 percent of states are on track to meet its emissions-cutting goals anyway.

"It is essential, not only to our planet, but also to our economic future, that the United States continues to serve as a global leader in solving the climate crisis by transitioning to clean energy, a transition that will continue to gain speed due to the increasing competitiveness of solar and wind," he said.