The visit was designed to highlight the U.S.-Japan alliance and showcase the warm relations between the leaders. President Trump said he and Abe deliberated over economic issues, including trade and Iran, during hours of talks at the Akasaka Palace. But North Korea's recent firing of short-range missiles emerged as an area of disagreement at a press conference Monday.

Asked if he was bothered by the missile tests, President Trump said: "No, I'm not. I am personally not."

Japan has long voiced concern about short-range missiles because of the threat they pose to the Island nation's security.

President Trump also said he disagrees with the assessment of many experts — as well as his own national security adviser — that the tests violate U.N. Security Council resolutions.

"My people think it could have been a violation," President Trump said. "I view it differently. I view it as a man — perhaps he wants to get attention and perhaps not. Who knows?" 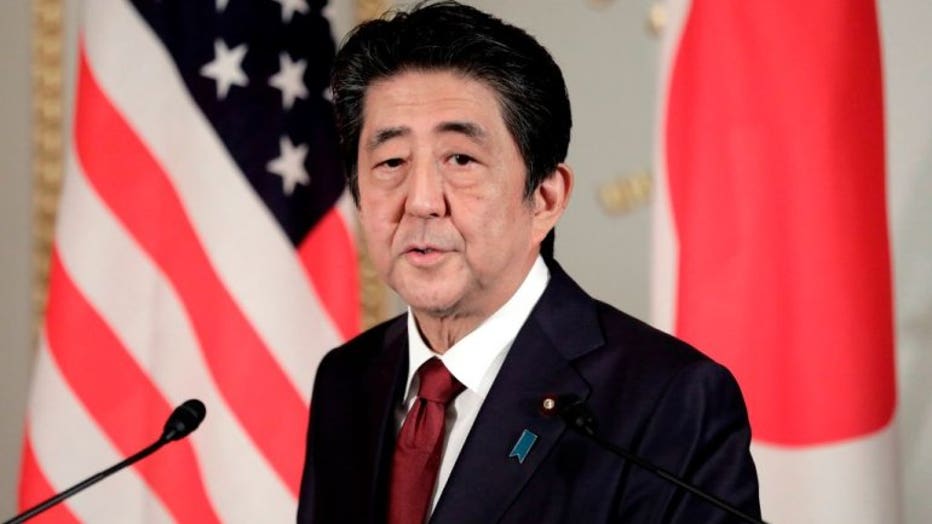 Japan's Prime Minister Shinzo Abe speaks during a joint press conference with US President Donald Trump (not pictured) at Akasaka Palace in Tokyo on May 27, 2019. (Photo by Kiyoshi Ota / POOL / AFP)

Standing beside President Trump at a news conference held after hours of talks, Abe, who has forged a strong friendship with President Trump and showered him with praise throughout the day, disagreed with the U.S. president, saying the missile tests were "of great regret."

The Republican president has sought to downplay the significance of the missile tests, even though his own national security adviser, John Bolton, said over the weekend that they violated the U.N. resolutions.

President Trump was invited to Japan to be the first world leader to meet with the country's new emperor . And despite being far from Washington, he didn't miss the chance to lob another broadside against Biden. President Trump didn't hold back at the news conference, telling the world he agreed with the authoritarian North Korean leader's assessment of Biden and declaring himself "not a fan." 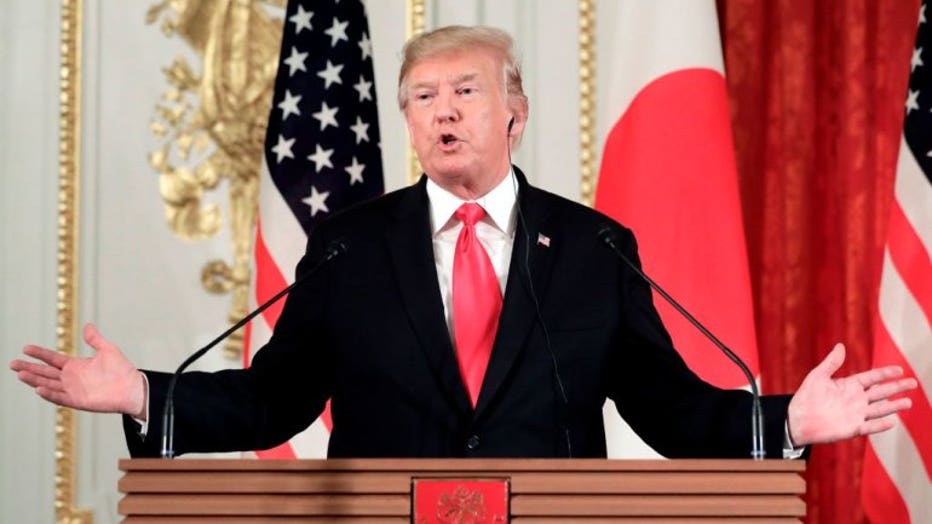 US President Donald Trump speaks during a joint press conference with Japan's Prime Minister Shinzo Abe (not pictured) at Akasaka Palace in Tokyo on May 27, 2019. (Photo by Kiyoshi Ota / POOL / AFP)

"Kim Jong Un made a statement that Joe Biden is a low-IQ individual," President Trump said. "He probably is based on his record. I think I agree with him on that."

U.S. officeholders have in the past generally avoided engaging in politics while on foreign soil, hewing to the adage that politics stops at the water's edge. But President Trump's sharp attack on Biden, through his declaration of agreement with Kim, set aside that long-standing norm.

Biden, during a recent campaign event, accused President Trump of cozying up to "dictators and tyrants" like Kim.

President Trump continues to hold out hope of getting Kim to agree to give up his nuclear weapons and ballistic missiles, even though the two summits he's had with the North Korean leader have produced no concrete pledge to denuclearize the Korean peninsula.

President Trump praised Kim, calling him a "smart man" who might have launched the missiles earlier this month to "get attention."

President Trump is correct that North Korea has not recently tested a long-range missile that could reach the U.S. But earlier this month, North Korea fired off a series of short-range missiles that alarmed U.S. allies in closer proximity to North Korea, including Japan. The tests broke a pause in North Korea's ballistic missile launches that began in late 2017.

Abe reiterated his previous statement that the tests were conducted in defiance of the U.N.

"This is violating the Security Council resolution," Abe said, adding that, as North Korea's neighbor, Japan feels threatened. "It is of great regret. But at the same time between Kim Jong Un and President President Trump a certain new approach was taken and that is something that I pay tribute to."

Earlier Monday, President Trump said he backed Abe's interest in leveraging his country's good relations with Iran to help broker a possible dialogue between the U.S. and its nemesis in the Middle East. Abe said he is willing to do whatever he can to help to reduce escalating tensions between the U.S. and Iran.

"Peace and stability of (the) Middle East is very important for Japan and the United States and also for the international community as a whole," Abe said.

Abe could visit Iran next month.

President Trump also said his only aim is to prevent the country from obtaining nuclear weapons.

"We're not looking for regime change," he said. "I just want to make that clear. We're looking for no nuclear weapons."

President Trump and Abe held hours of talks Monday after the U.S. president, at Abe's invitation, became the first world leader to meet Japan's new emperor, Naruhito, who ascended to the throne May 1.

The meeting with Naruhito and his wife, Empress Masako, was preceded by a grand outdoor welcome ceremony at Japan's Imperial Palace, where Trump walked solo across red carpets, reviewing Japanese troops as the guest of honor.

President Trump's official visit also included golf with Abe, presenting a trophy he created to a sumo wrestling champion and a black-tie banquet at the palace — as well as hours of one-on-one time for President Trump and Abe, who has been trying to remain on President Trump's good side despite disagreements, including over trade.

President Trump and Abe largely glossed over those differences, despite the potentially crippling tariffs on foreign autos that President Trump is threatening to impose on Japan and the European Union. President Trump declined to say what Japan would have to do to avoid those tariffs but complained of an "unbelievably large" trade imbalance with the nation.

Still, he said he expects to reach trade deals with Japan and China, but wouldn't rush it.

President Trump has tried to pressure China by slapping tariffs on hundreds of billions of dollars of Chinese goods.

"I don't believe that China can continue to pay these really hundreds of billions of dollars in tariffs," President Trump said.

In fact, tariffs are paid primarily by U.S. businesses and consumers.

President Trump and Chinese President Xi Jinping are expected to meet during a world leaders' summit next month in Osaka.