WASHINGTON — President Donald Trump on Friday presented one of the nation’s highest civilian honors to Jim Ryun, a former Republican congressman and the first U.S. high schooler to break the 4-minute barrier in running the mile.

Ryun was the 1968 Olympic silver medalist in the 1,500-meter run and is a three-time Olympian. Trump presented him with the Presidential Medal of Freedom during a ceremony at the White House, calling him a “legendary athlete and a legendary runner."

“Jim has personified the greatness of our country throughout his life,” Trump said. “He’s a giant of American athletics.”

Ryun noted that he was cut from several athletic teams as a youth, including the church baseball team, but found his calling while running on the track team at Wichita East High School. 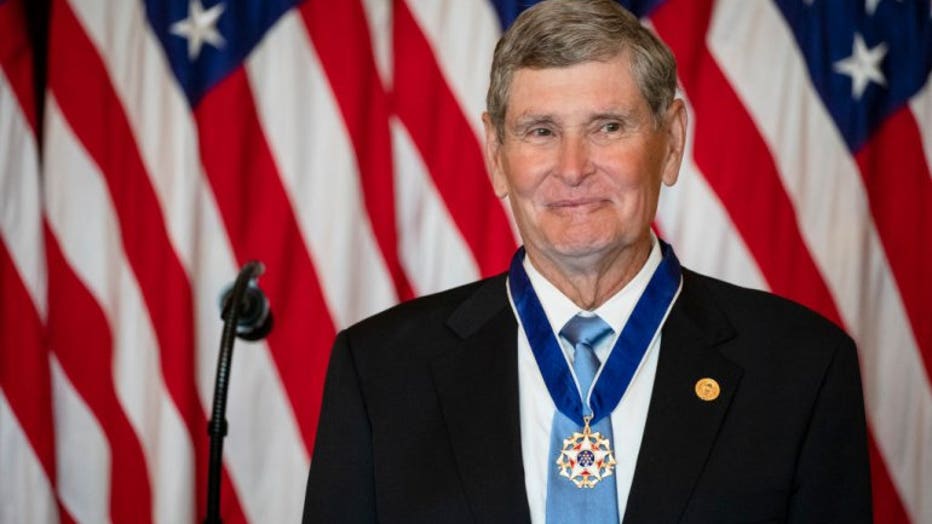 WASHINGTON, DC - July 24: Olympic track and field athlete and former member of the U.S. House of Representatives Jim Ryun smiles after U.S. President Donald Trump presented him with the Presidential Medal of Freedom to in the Blue Room of the White H

His grueling training included running 100 miles a week, including running into the night after getting out of school, he recounted during the ceremony.

“I was made for running," he said.

As a 17-year-old junior, he became the first high school athlete to break the 4-minute barrier when he ran it in 3 minutes and 59 seconds. That year, he went on to qualify for the Tokyo Olympics in 1964. He was named the Sports Illustrated Sportsman of the Year in 1966, the year he smashed the world record in the mile at 3:51.3. He graced the cover of the magazine seven times — all before the age of 25.

The Presidential Medal of Freedom is presented to those who make especially meritorious contributions to the nation.

Ryun went on to serve as a member of the House representing a Kansas congressional district from 1996 to 2006. Ryun said that one of the greatest honors of his life was to represent the country and “wear the stars and stripes on my chest while racing in the '60s and '70s," and he went on to thank Trump for his “full-throated championing of this great country."