WASHINGTON -- President Donald Trump abandoned his controversial bid to demand citizenship details from all respondents in next year's census Thursday, instead directing federal agencies to try to compile the information using existing databases. 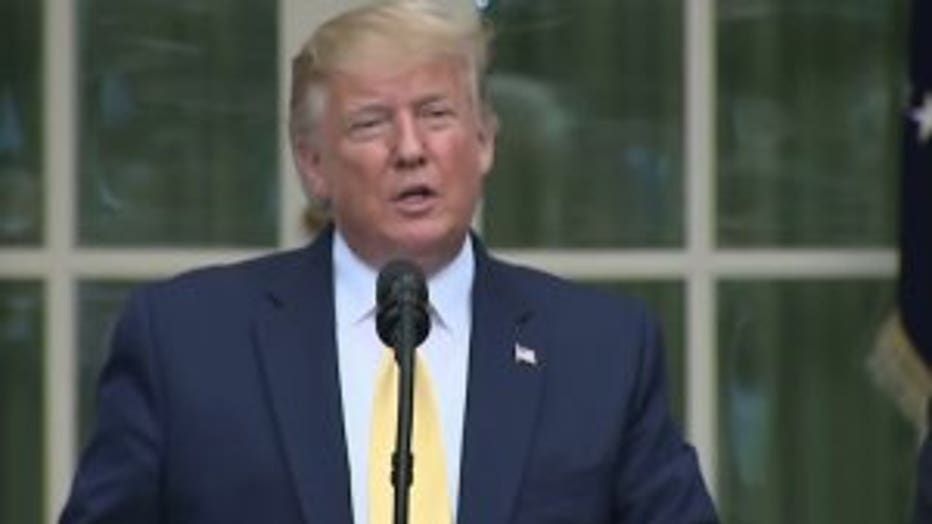 "It is essential that we have a clear breakdown of the number of citizens and non-citizens that make up the United States population," President Trump said at a Rose Garden announcement. He insisted he was "not backing down."

His reversal comes after the Supreme Court blocked his efforts to include the citizenship question and as the government had already begun the lengthy and expensive process of printing the census questionnaire without it.

President Trump had said last week that he was "very seriously" considering an executive order to try to force the question's inclusion, even though such a move would surely have drawn an immediate legal challenge.

But he said Thursday that he would instead be signing an executive order directing agencies to turn records over to the Department of Commerce.

"We're aiming to count everyone," he said.

Critics have warned that including the citizenship question on the census would discourage participation, not only by those living in the country illegally but also by citizens who fear that participating will expose noncitizen family members to repercussions.

Keeping the prospect of adding the question alive could in itself scare some away from participating, while showing President Trump's base that he is fighting for the issue.

President Trump's 2016 campaign was animated by his pledge to crack down on illegal immigration, and he has tied the citizenship question to that issue, insisting the U.S. must know who is living here.

An executive order, by itself, would not have overridden court rulings blocking the question, though it could have given administration lawyers a new basis on which to try to convince federal courts the question passes muster.

President Trump had previewed his remarks earlier Thursday at a White House social media event, where he complained about being told: "'Sir, you can't ask that question ... because the courts said you can't.'"

Describing the situation as "the craziest thing," he went on to contend that surveyors can ask residents how many toilets they have and, "What's their roof made of? The only thing we can't ask is, 'Are you a citizen of the United States?'"

The Census Bureau had stressed repeatedly that it could produce better citizenship data without adding the question to the decennial census, which had not been done since 1950.

The bureau recommended combining information from the annual American Community Survey with records held by other federal agencies that already include citizenship records.

But Commerce Secretary Wilbur Ross, who oversees the Census Bureau, ultimately rejected that approach and ordered the citizenship question be added to the census.

President Trump's administration has faced numerous roadblocks to adding the question, beginning with the ruling by the Supreme Court temporarily barring its inclusion on the grounds that the government's justification was insufficient. A federal judge on Wednesday also rejected the Justice Department's plan to replace the legal team fighting for inclusion, a day after another federal judge in Manhattan issued a similar ruling, saying the government can't replace nine lawyers so late in the dispute without satisfactorily explaining why.

Refusing to concede, President Trump had insisted his administration push forward, suggesting last week that officials might be able to add an addendum to the questionnaire with the question after it's already printed. He has also toyed with the idea of halting the constitutionally mandated survey while the legal fight ensues.

President Trump has offered several explanations for why he believes the question is necessary to include in the once-a-decade population count that determines the allocation of seats in the House of Representatives for the next 10 years and the distribution of some $675 billion in federal spending.

"You need it for Congress, for districting. You need it for appropriations. Where are the funds going? How many people are there? Are they citizens? Are they not citizens? You need it for many reasons," he told reporters last week, despite the fact that congressional districts are based on total population, regardless of residents' national origin or immigration status.

If immigrants are undercounted, Democrats fear that would pull money and political power away from Democratic-led cities where immigrants tend to cluster, and shift it to whiter, rural areas where Republicans do well.

Senate Democratic Leader Chuck Schumer on Thursday called President Trump's efforts "outrageous" and accused him of pushing the question "to intimidate minorities, particularly Latinos, from answering the census so that it undercounts those communities and Republicans can redraw congressional districts to their advantage."

"He thinks he can just issue executive orders and go around the Congress, go around established law and try to bully the courts," Schumer said from the Senate floor. He predicted the effort would be thwarted by the courts.

House Democrats next week will vote on holding Attorney General William Barr and Commerce Secretary Ross in contempt for their failure to comply with congressional subpoenas investigating the issue.

Alarmed by last week's change of course by the administration, the plaintiffs in the New York census citizenship case already have asked U.S. District Judge Jesse Furman to permanently block the administration from adding the question to the 2020 census. Furman has set a July 23 hearing on the request.

"This is a victory for the American people. We need an accurate census to ensure that Americans everywhere receive their fair share of resources and representation. And that’s why Democratic attorneys general from multiple states fought to prevent Trump from distorting the results with a discriminatory citizenship question.

"As soon as the Supreme Court rejected the administration’s rationale for including the question, Trump’s utter disrespect for the rule of law was on full display. And despite his defeat in our courts, he’s still trying to use the power of the federal government to demonize and discriminate against immigrant communities. So our fight is far from finished. Democrats will never back down, and we will hold Trump accountable on Election Day."