Pres. Obama cites gains in health coverage during visit; “You worked your tails off”

Pres. Obama cites gains in health coverage during visit; "You worked your tails off"

"I could not be prouder of you. God bless you Milwaukee," President Obama said.

President Obama took the stage in a city where 89,000 people enrolled in health insurance this year through the Affordable Care Act -- a law he fought for.

"That`s enough to fill Lambeau Field, and still have a big tailgating party for the folks outside, and those tailgaters wouldn`t have to worry because Obamacare covers indigestion for too many brats," President Obama said.

At the same time, President Obama was in a state that is suing him over the law.

"By the way Milwaukee, while you worked your tails off to cover enough folks to fill Lambeau Field, your governor still refuses to expand Medicaid in this state. We could cover another 21,000 Wisconsinites with the stroke of his pen. He`s denying Wisconsinites their ticket to health insurance, and it`s political," President Obama said. 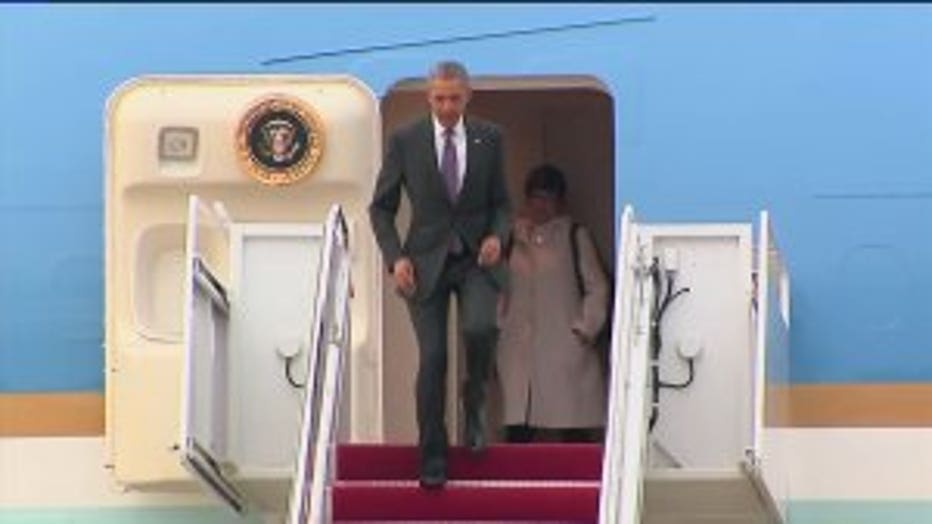 Participants in the lunch included:

In June, Brent Brown – from Mosinee, Wisconsin – wrote the President a letter about the Affordable Care Act. Brent explained that he didn’t vote for the President in either election – in fact, he actively campaigned against him. But after being diagnosed with an autoimmune disease and draining his bank account to the point where he could no longer afford the care he needed, Brent says the Affordable Care Act saved his life.

Karen George wrote to the President in August about her family’s story, their struggles and successes, and the ways in which the policies pursued by the President – from the Affordable Care Act to the Home Affordable Refinance Program (HARP) – have helped make things a little easier for them. Originally from West Allis, Wisconsin, the Georges recently moved to Springfield, Illinois. Karen wrote: “Your presidency has had a direct, important, personal impact on our lives.”

Karen Szyszko sent a letter in March to the President on behalf of the Szyszko family to thank him for the Affordable Care Act, which allowed Karen’s sister Sharon to get ankle surgery she needed but had to put off for years. Today, Sharon is without pain and according to Karen “a walking testament” to the President’s “understanding and care for all Americans.”

Susan Campbell, of Milwaukee, Wisconsin, wrote to the President in February of 2015 as a relatively healthy adult whose basic medical expenses had previously threatened to wipe her out financially. Through the Affordable Care Act, her expenses have become much more manageable, something that makes her feel empowered. In her letter, Susan cautions against those seeking to overturn the law, stating that doing so would prevent her from ever seeking medical attention again. During the most recent open enrollment, Susan served as an ACA Ambassador – individuals who had written the President to thank him for the ACA and wanted to share their stories with others. Susan wrote a letter to other Milwaukee residents, sharing her experience and encouraging them to spread the word about open enrollment.

On the way in, President Obama spoke with diners, and one woman appeared to be moved to tears as she spoke with him.

Shortly after 1:15 p.m., the president climbed into his vehicle and the motorcade headed towards the Bruce-Guadalupe School/United Community Center at 9th and National. 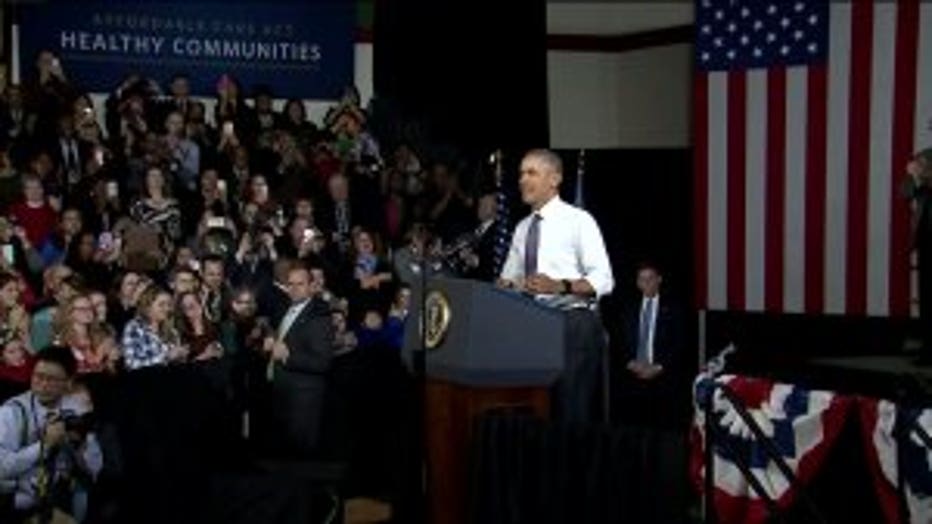 There, the president delivered remarks on the Affordable Care Act and the Healthy Communities Challenge, which Milwaukee won, netting this presidential visit.

President Obama acknowledged that millions more are eligible to enroll in health insurance but have yet to do so. He attributed some of that to the acrimony over the law, saying people haven't always known what's true and what's not. 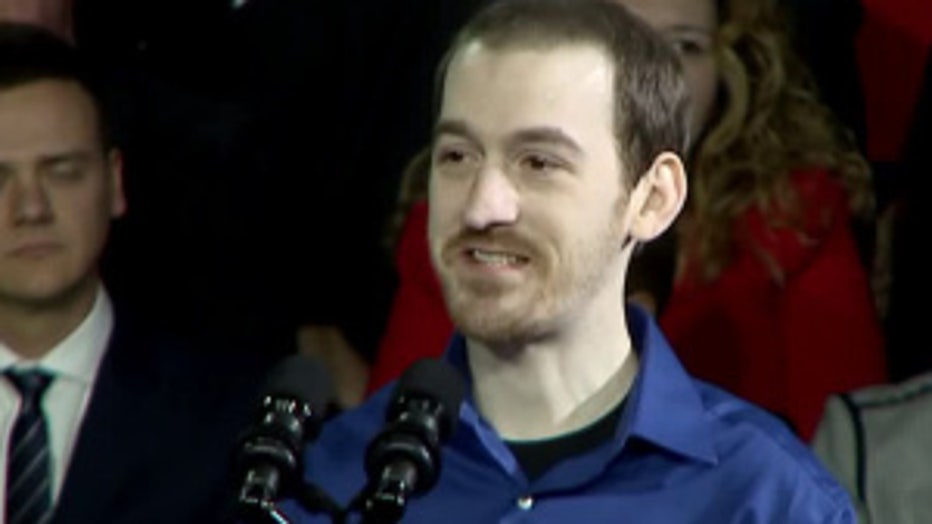 The president was introduced by Brent Brown of Mosinee, Wisconsin, who said he was a Republican who never voted for Obama as president. But he said the president's health care law saved his life after he was diagnosed with an autoimmune disease and ran out of money for treatment.

Brown called on Republicans to quit trying to repeal the health law. 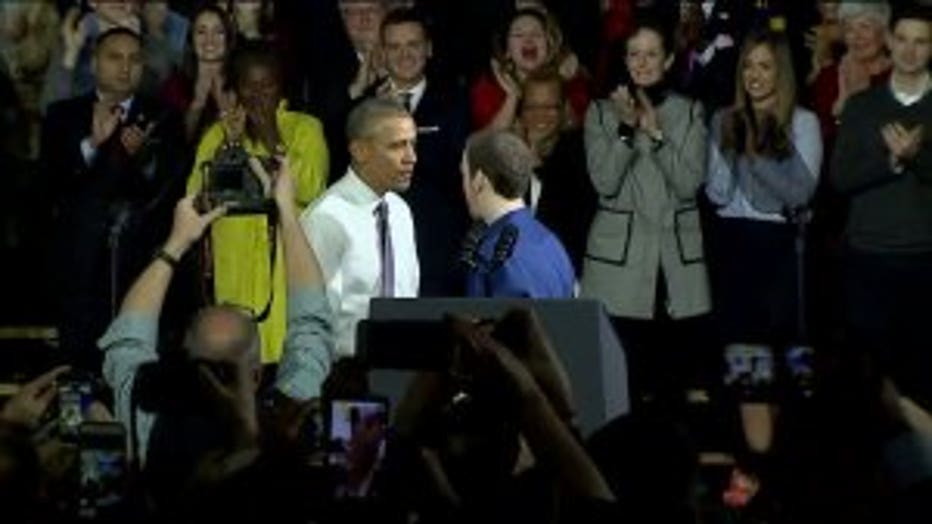 RAW VIDEO: Brent Brown speaks about how the ACA affected his life

RAW VIDEO: Brent Brown speaks about how the ACA affected his life

Wisconsin is one of six states suing over the Affordable Care Act.

"We hear routinely from small business owners and farmers across the state is that it's anything but affordable," Governor Scott Walker said.

Walker said he is not opposed to people having health care coverage -- he simply believes there's a different way.

"Access is a good thing," Walker said. "We believe the federal government that continues to build up debt and deficient problems regardless of the party is not going to be in a position in the next several years to meet their commitments even before the Affordable Care Act -- even more so going forward."