VATICAN CITY — Pope Francis offered a Christmas message of hope Wednesday against darkness that cloaks conflicts and relationships in large parts of the world from the Middle East to the Americas to Africa.

The pope told tens of thousands of tourists, pilgrims and Romans gathered in St. Peter’s Square for the annual Christmas Day message that “the light of Christ is greater'' than the darkness “in human hearts" and ‘’in economic, geopolitical and ecological conflicts.''

The traditional “Urbi et Orbi’’ (“to the city and to the world’’) Christmas message has become an occasion for popes to address suffering in the world and press for solutions. Francis was flanked by Cardinal Renato Raffaele Martino, president of the papal council for migrants, and Cardinal Konrad Krajewski, the pope's official almsgiver.

The pope cited the Syrian people “who still see no end to the hostilities that have rent their country over the last decade’’ as well as Israel, where Jesus “was born as the savior of mankind and where so many people -- struggling but not discouraged -- still await a time of peace, security and prosperity.’’ 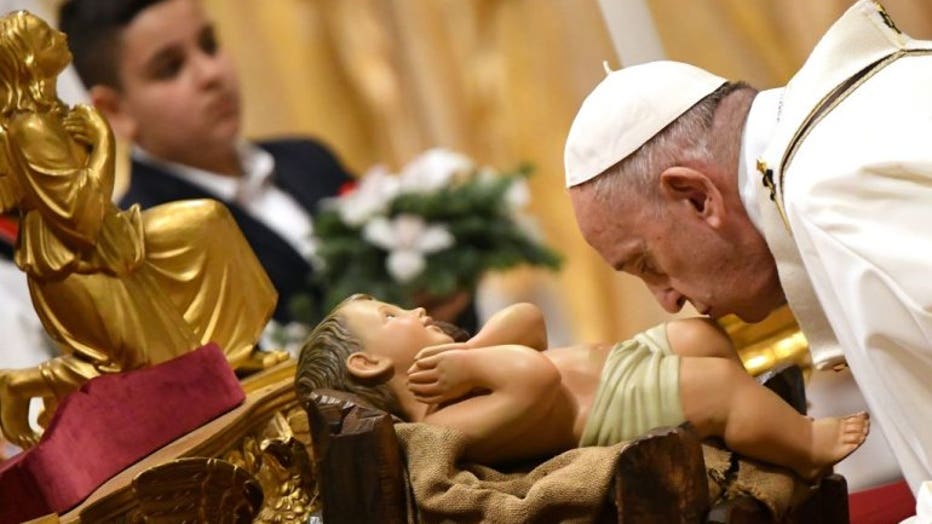 Pope Francis kisses a figurine of baby Jesus during a mass on Christmas eve on December 24, 2019, at St Peter's basilica in the Vatican. (Photo by Alberto PIZZOLI / AFP) (Photo by ALBERTO PIZZOLI/AFP via Getty Images)

Francis also called for an easing of the crisis in Lebanon, social tensions in Iraq and “a grave humanitarian crisis’’ in Yemen.

He noted that a number of countries in the Americas “are experiencing a time of social and political upheaval,’’ citing “the beloved Venezuelan people, long tried by their political and social tensions."

The pope also noted migrants forced by injustice “to emigrate in the hope of a secure life.’’ Instead of finding acceptance, Francis said injustice continues along their journey, where they often face abuse, enslavement and torture in “inhumane detention camps'' and death during dangerous sea and desert crossings. 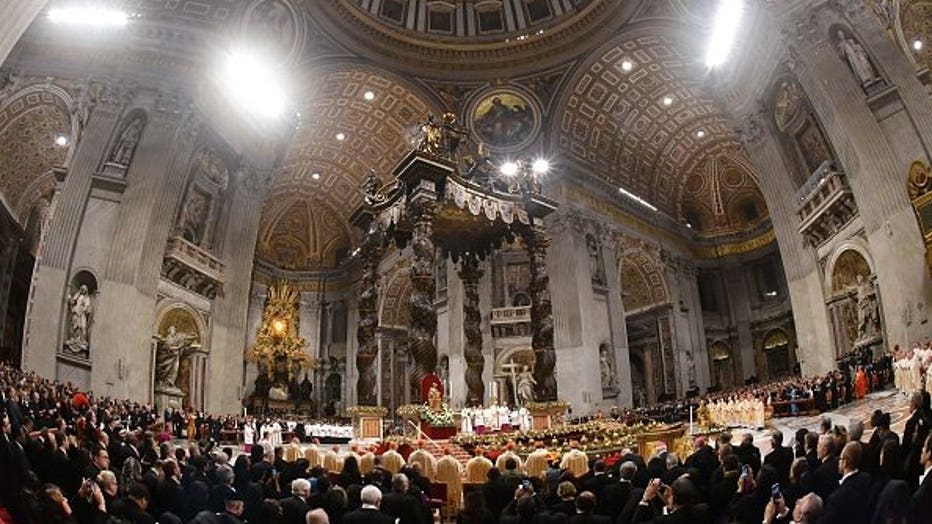 Pope Francis leads a Christmas Eve mass in St Peter's Basilica to mark the nativity of Jesus Christ on December 24, 2019 at the Vatican. (Photo by Alberto PIZZOLI / AFP) (Photo by ALBERTO PIZZOLI/AFP via Getty Images)

And once migrants arrive in “places where they might have hoped for a dignified life’’ ... they “instead find themselves before walls of indifference,'' he said.

The pope offered prayers of hope for the people of Africa, including those in Congo “torn by continuing conflicts’’ and the people of Burkina Faso, Mali, Niger and Nigeria, where people have been “persecuted for their religious faith.’’

And in an extraordinary message, Francis along with two other religious leaders urged the rival leaders of South Sudan to maintain a pledge to form a coalition government early next year. A peace deal to end a 5-year civil war that killed close to 400,000 people was signed last year, but a November deadline to form a coalition government was extended to February as key aspects of the peace deal still need to be resolved.

The message, issued separately from the traditional papal Christmas address, was signed by the leader of the Anglican church, Archbishop Justin Welby, and the Rev. John Chalmers, ex-moderator of the Church of Scotland.

The religious leaders offered assurances “of our spiritual closeness as you strive for a swift implementation'' of peace agreements and prayers “for a renewed commitment to the path of reconciliation and fraternity.''

The leaders also expressed a desire to visit the East African nation.