MILWAUKEE - A Milwaukee man says he rushed his friend to the hospital to save his life and ended up with five police officers piled on top of him. But it's what happened four months later that prompted the man at the bottom of the pile to call FOX6 Investigator Bryan Polcyn.

"Cooperate! Cooperate!" calls out a female voice as the Milwaukee police officer and four of her colleagues attempt to handcuff 45-year-old Michael Poe, ultimately tackling him to the floor.

"What did I do though?" Poe cries out from beneath the scrum.

"He ain't did nothin'," says a voice from behind the cellphone camera recording the event. 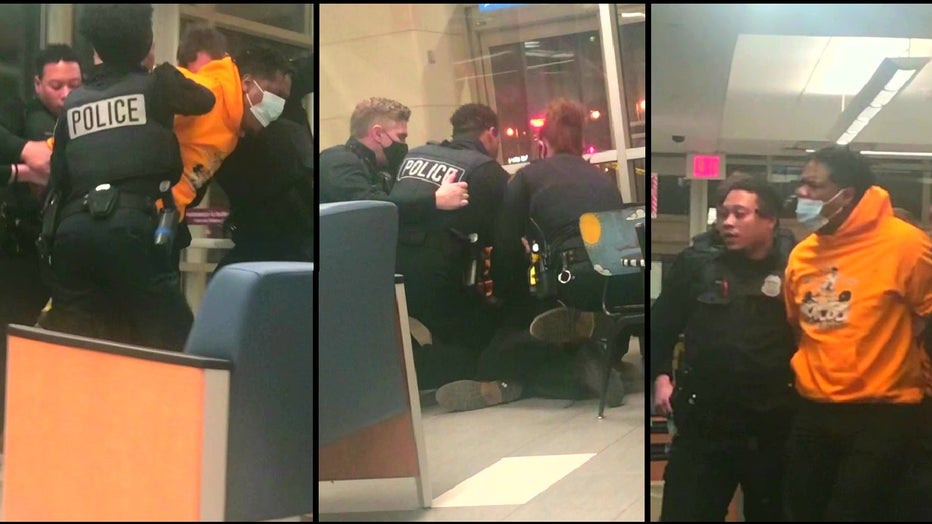 The 6-minute, 3-second video was recorded in the lobby of Ascension Columbia St. Mary's hospital in Milwaukee on April 14, 2021, by an unidentified man who recognized the person police were attempting to detain.

The citizen provided the video to Poe who, in turn, brought it to the FOX6 Investigators.

To understand what happened – and why – you have to go back about two hours earlier when Poe was watching basketball on television with a couple of friends.

Poe is part owner of a private lounge for a group of men with two things in common. They are black professionals and they smoke cigars.

Elevn Lounge – with a stylistic missing "e" – was named for 11 friends who started a group chat years ago. Their friendships grew into business relationships and, eventually, a members-only private lounge near 5th and Center. 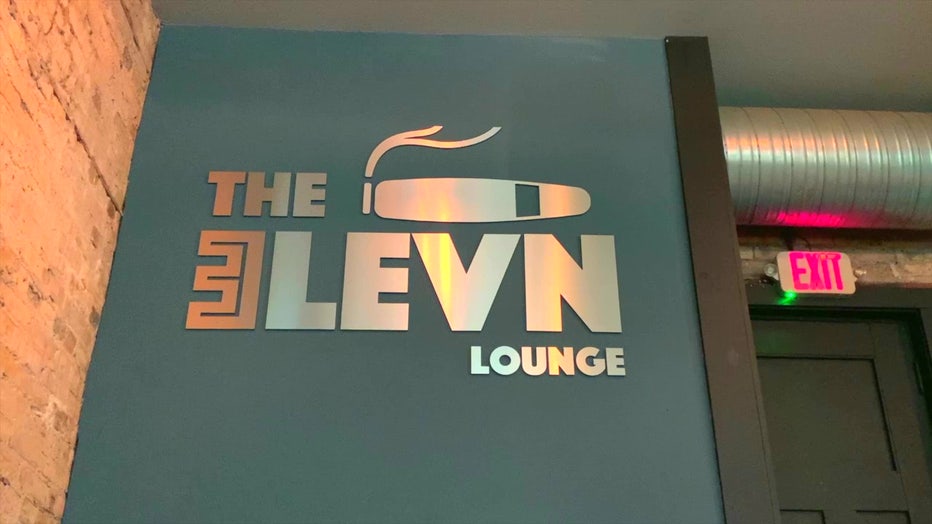 On April 14, 2021, three of the members were watching an NBA basketball game when, suddenly, a deafening noise interrupted the night.

"I said, ‘Oh, it’s a hole up in the ceiling,'" recalls Daniel Beard, one of the three men in the lounge that night.

That's when a third man, Larry, called out, "I've been shot!"

"Blood is just gushing out of his leg," Poe said.

Concerned for his friend's life, Poe fashioned a tourniquet while Beard grabbed his car keys. The two men helped Larry to the car, and they drove him to the hospital – calling 911 along the way.

The FOX6 Investigators obtained eight police body camera videos that give insight into what happened over the next few hours that resulted in officers briefly targeting the wrong man. Scroll to the end to watch those videos, along with others we relied upon in reporting this story.

Once Beard called 911, police immediately dispatched squads both to the lounge, at 504 E. Center St., and to the hospital.

Officers arriving at the lounge found blood on the curb outside, but the door was locked and the club empty.

At the hospital, Poe and Beard describe what happened.

"Next thing you know, hear a pop!" Beard says to an officer.
"I thought the ceiling fan went out," Poe continued, adding one important thing. 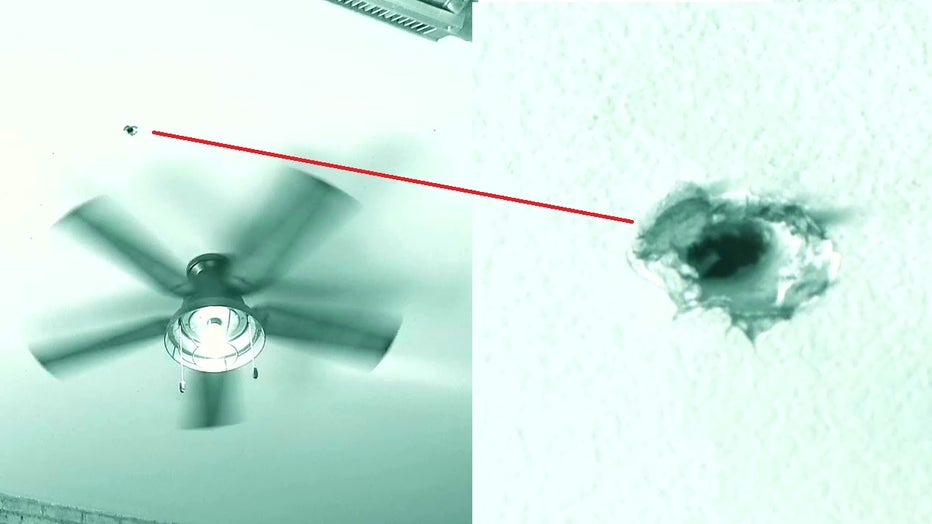 At around 7:30pm on April 14, 2021, a bullet came through the ceiling of the lounge and struck a man watching basketball on TV.

"I do carry a service weapon," he said. "I was always told to say that."

"Yep, that’s good," the officer replies, removing the gun from Poe's waistband and taking it into her possession. "There’s nothing wrong with that."

Officers then take the witnesses inside the lobby and separate them. Once again, they tell their story.

As they are repeating their version of events, police force their way into the lounge.

"Milwaukee police, anybody in here, announce yourself!" says an officer, leading others in to search the building.

Within minutes, they locate a bullet hole in the ceiling.

Just as the witnesses had described.

"I'm sure this one’s not going to be too hard for them to solve," an officer at the hospital says to Poe.

For the next hour, officers engage each of the men in light conversation. But then, their tone changes. 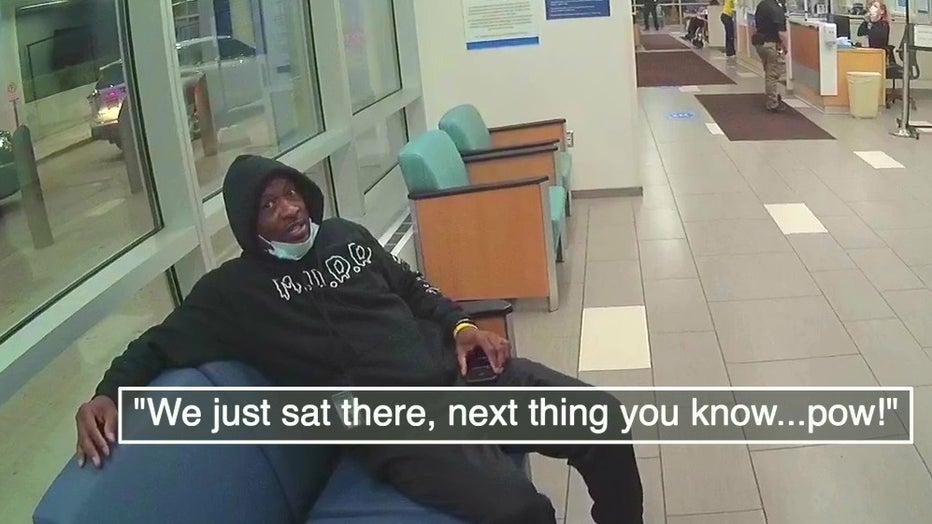 Daniel Beard tells an officer what he witnessed.

"Well, sir, you’re going to have to come with me," one officer says to Poe.
"We need have to have you in the car," another adds.
"Oh no," Poe objects. "I’m not getting in the car. Y’all are crazy. Y’all are crazy as hell."

A bystander who recognized Poe from the cigar lounge begins recording on his cellphone moments after police learn a second shooting victim had just shown up at another hospital.

20-year-old Cameron Lee told medical staff at Mount Sinai Hospital he'd been shot by a passing car, but he later admitted to detectives what really happened.

Lee was visiting friends in the apartment above the lounge. He pulled a gun out of his backpack to show it to the young women who lived there. When he attempted to put the gun back in his bag, it discharged, striking Lee in the leg.

"It, like, shot, through my pants everything," Lee told detectives in a recorded interview. 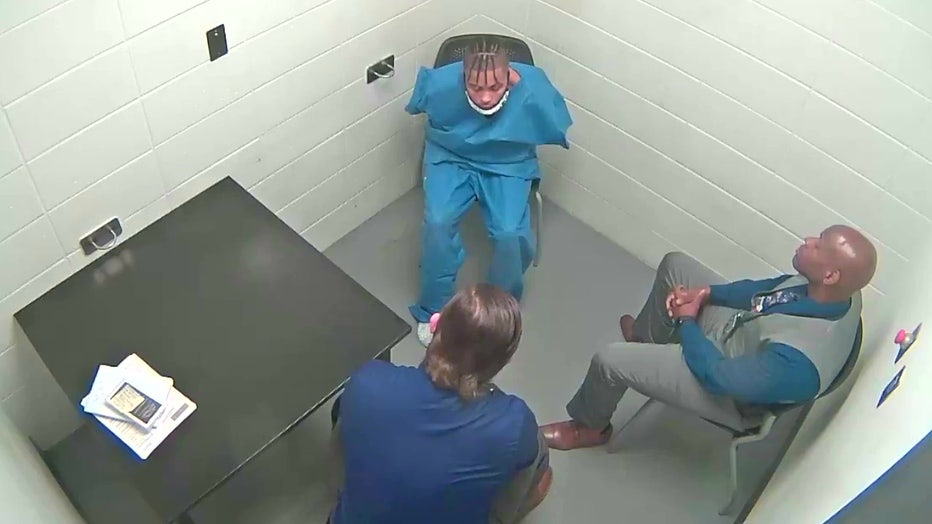 20-year-old Cameron Lee tells detectives he accidentally fired his gun- in the apartment above the lounge, then jumped off a balcony and ran away.

Not only did Lee shoot himself, the bullet went through the floor and struck Poe's friend in the leg. Instead of sticking around to explain to police what happened, Lee panicked.

The only staircase led out the front where officers were already arriving. So Lee went out the back and jumped – with an injured leg – from a second story balcony.

"That was a pretty big jump," he said.

He climbed a tall fence, discarded the gun, and ran.

When officers asked the tenants upstairs what happened, they lied.

"Hi, this is Milwaukee Police, is anyone else shot upstairs?" an officer asked.
"No," said an unidentified woman.

Police asked to search the apartment, but the occupants did not tell them what they saw.

"Told them they didn’t see or hear anything," Poe said.

That only added to the confusion back at Ascension Columbia St. Mary's, where the focus turned to Poe.

I'm not gonna sit in the back of a car," Poe tells officers.

"We have reasonable suspicion that a crime has been committed," an officer tells him.
"From me?" Poe asks.
"Yes," he answers.
"You guys are telling me I shot my friend?" Poe says excitedly.
"We’re not saying that," says a female officer.
"That’s why I say, you’re not under arrest," a male officer continues.

While officers assured Poe he was not under arrest, they simultaneously told him he had no choice but to come to a squad car for questioning.

"It’s either you stand up and you go to our car, or you can do it in 'cuffs," the male officer said.
"I’m not standing up, and I'm not doing it in 'cuffs, either," Poe responded.

From there, the tension quickly began to escalate. 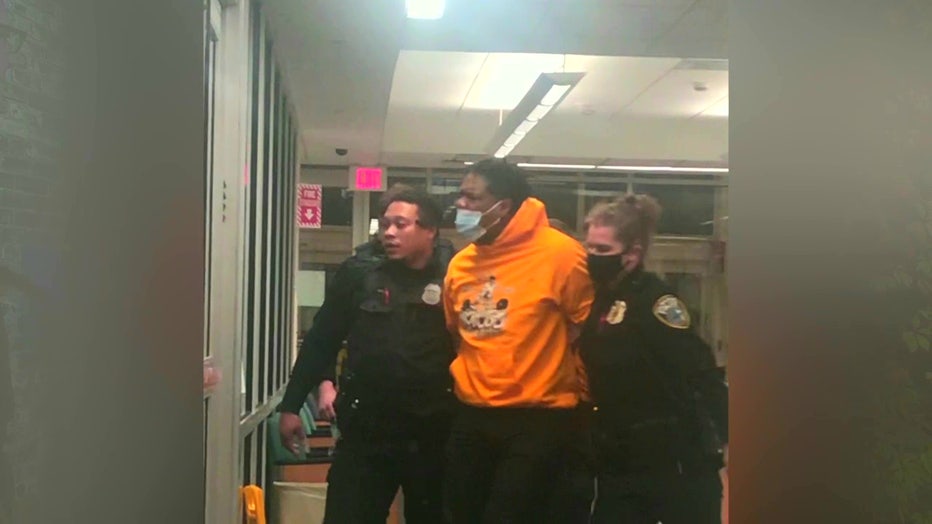 Michael Poe is led out of Columbia St. Mary's in handcuffs only to be released a short time later with an apology and his handgun.

Two officers each place their hands on Poe's wrists and attempt to stand him up from a seated position, but Poe resists.

"Sir, sir, sir, sir!" an officer calls out, as Poe refuses to allow his arms to be placed behind his back.

Three more police officers join the struggle, standing Poe up, then tackling him to the floor.

Once Poe was handcuffed, the officers stand him up and walk him out of the lobby, as Poe bellows, "Why are you telling me I shot my friend, man?!"

"He became a suspect," Beard said.

A retired detective who agreed to review the case as long we don’t identify him says it was "absolutely reasonable" for officers to detain Poe.

"He has a pistol on him without a holster," the retired detective said. "There’s another victim that shows up at another hospital. Until they sort that out, you don’t know if this guy shot that guy."

"They had no right to put their hands on him," he said. "There was neither probable cause nor reasonable suspicion that this guy had done anything wrong."

That same night – not long after the five officer takedown – police discover Lee was, in fact, the accidental shooter and that Poe had been telling the truth all along.

"Hey, Mr. Poe, we’re sorry. You’ve never been in trouble," Poe recounts them saying. "You didn’t know how this was going to go. Matter of fact, here’s your gun back."

It's what happened next that prompted him to call the FOX6 Investigators.

In August, four months after the incident, police sent Poe 45 pages of case files. His name is mentioned only once, as a witness to the stray bullet entering the lounge.

There's no mention of his resistance to being questioned and nothing about force officers used to detain him.

"They knew that they did something wrong," Poe said. "That’s why they did not put me in this report."

"If the police had conducted themselves appropriately in this matter," Gende concurs, "there would be no reason to exclude it from their reports."

Because of our investigation, Milwaukee police say they have now opened their own internal investigation. But Poe is still trying to make sense of what happened. 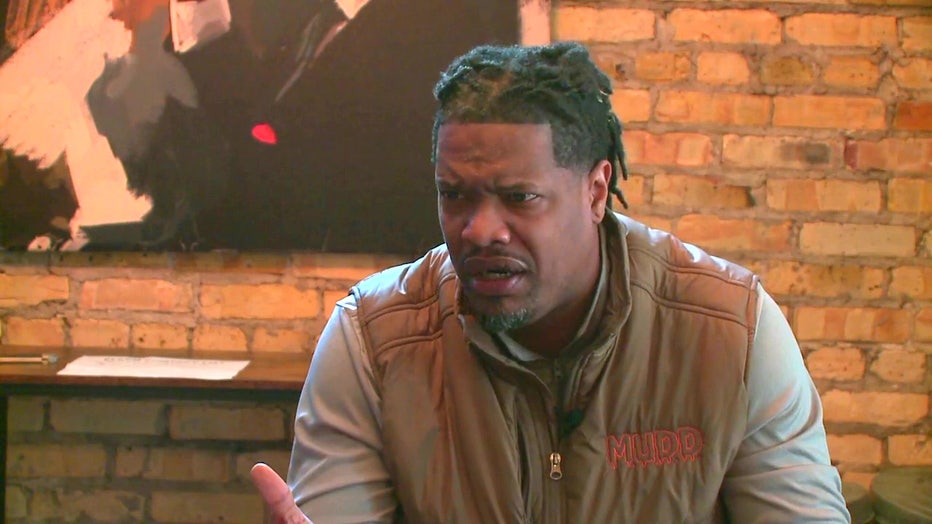 Poe was not arrested or cited for resisting. One year later, he has yet to file a formal complaint against Milwaukee Police.

He says he views it as a Black man.

"In this climate of where America is right now…how many other citizens out here are dealing with the same situation, and it’s not being recorded?"

But also as a businessman with a private lounge whose members include retired Milwaukee police officers.

"That’s why it bothered me so much," Poe said.

They opened the club to get away from life's problems. But even behind locked doors, the problems found them.

Since the shooting on April 14, 2021, 20-year-old Cameron Lee was sentenced to 18 months of probation for negligent use of a weapon.

Michael Poe was never charged with resisting or obstructing police, but he also has not filed a complaint against police.

A Milwaukee Police Department spokesman says it was our request for a use of force report and body camera videos that prompted internal affairs to start taking a closer look. That investigation remains open.

(NOTE: Times seen in body camera recordings are GMT, 5 hours ahead of Milwaukee)