CHICAGO - Chicago Mayor Lori Lightfoot imposed a 9 p.m. to 6 a.m. curfew on Saturday night after hundreds of people came to downtown Chicago on Saturday to protest the Minneapolis police killing of George Floyd.

"I've been engaged for the last six-plus hours watching a tragedy unfold in our city. What started out as a peaceful protest devolved into criminal conduct," said Mayor Lori Lightfoot late Saturday night. "I saw protesters armed with shovels, bats. I've marched in a few protests in my day. But neither I nor anyone I was with felt the need to bring weapons to lift up our voices."

"We will be holding you accountable and taking you into custody with question," said Police Superintendent David Brown.

"This crowd is increasingly more mean-spirited and violent," Brown said. "This has been a challenging moment for all cities throughout the country. Our police have conducted themselves in a professional way."

Lightfoot said at about 8:25 p.m. that people have about 35 minutes to clear the streets.

"We wanted to give time and distance, as you are taught in de-escalating, to make sure the people who were peacefully protesting could do so in safety. We are not going to allow this situation to get out of hand," Lightfoot said.

The mayor said there was no talk of bringing in the National Guard.

Brown and Lightfoot both said the violent protesters were doing a disservice to Floyd's memory.

The protesters first gathered in the Loop, where they sprayed graffiti on some buildings and partially burned an American flag.


The protesters marched through the streets and ended up outside Trump Tower in River North around 4 p.m. There, they confronted a line of police officers. Around 3:50 p.m., a couple protesters damaged a police squad car by jumping on it and swinging a skateboard at the windows.

Then, protesters marched east along the Chicago River.

Mayor Lori Lightfoot says the cellphone video of George Floyd apparently being suffocated by a Minneapolis police officer brings back the trauma surrounding the 2014 shooting of teenager LaQuan McDonald by a Chicago Police officer.

"We can't rest knowing the black mothers and fathers in our city still live in fear of getting a phone call about something terrible happening to one of their children,” Lightfoot said Thursday.

CLICK HERE for the latest information out of Chicago 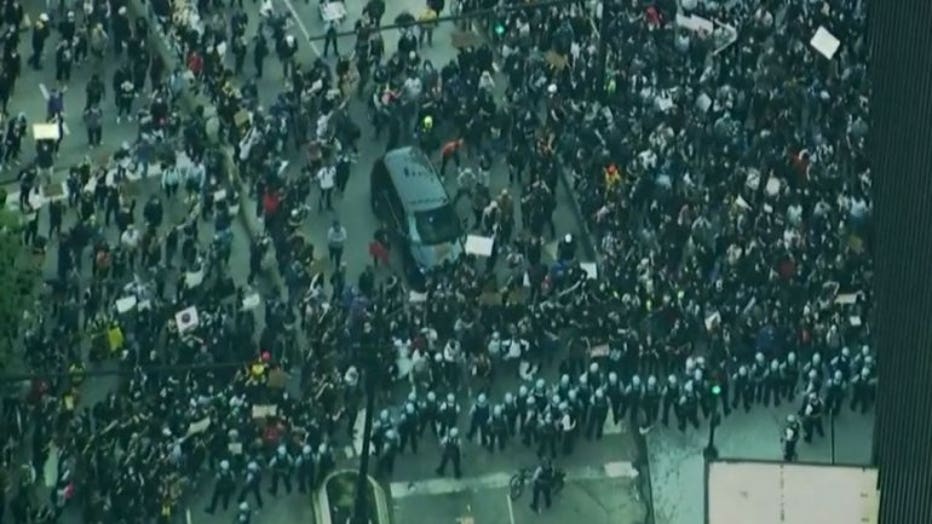 Chicago officials are restricting parking across most of the downtown area Saturday afternoon. The restrictions will extend from Chicago Avenue south to Ida B. Wells Drive, and from Lake Shore Drive west to Wells Street, according to the Chicago Office of Emergency Management and Communications.

Cars found in the area will be towed to 1802 S. Lake Shore Drive, officials said.

The CTA suspended Red Line service about 4:05 p.m. between the Fullerton and Sox-35th stations, citing protest activity near downtown.