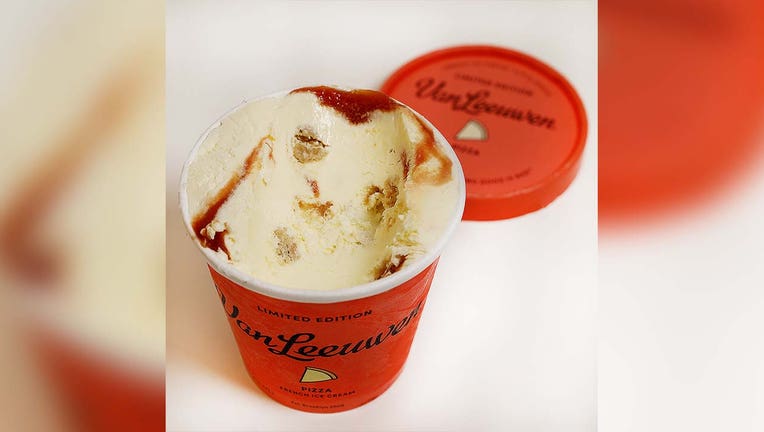 Van Leeuwen will churn those two foods together for a new limited-edition pizza ice cream pint, which will be sold at Walmart stores nationwide exclusively for a short time.

The Brooklyn-based ice cream company announced on its social media accounts that the pizza pint will become available for purchase starting Monday, March 14.

The ice cream will be made from a cream cheese and mozzarella base and have tomato jam swirls and basil crust cookies.

In total, seven limited-edition ice cream flavors will be stocked on Walmart freezer shelves, the company wrote in a separate Instagram post.

A spokesperson for Walmart told FOX Business that the limited-edition ice cream pints will be available for purchase at 3,500 locations nationwide for 10 weeks.

Walmart’s press release also says Van Leeuwen and the retail giant intend to continue their exclusive flavor rotation and have "plans to refresh flavors in summer."

Van Leeuwen considers itself a maker of French ice cream because it uses "twice as many egg yolks" compared to "standard ice cream" in the U.S. The brand’s website states that this egg yolk ratio difference means "you have to call it French ice cream."

When Van Leeuwen first started, it served ice cream from a scoop truck. The brand has since grown with multiple scoop shops in New York, New Jersey, California, Pennsylvania and Texas. Future shops are in the works in Colorado and Texas.

The brand might have possibly seen a boost from its appearance in mainstream TV shows and movies, including Anna Kendrick’s 2020 comedy series "Love Life," Netflix’s 2020 comedy horror movie "Vampires Vs. The Bronx" and Sony’s 2021 comedy film "Here Today," which featured Tiffany Haddish and Billy Crystal.

"If I were to trust any brand of ice cream to make this flavor taste good it would have to be you," one Instagram commenter wrote.

FOX Business reached out to Van Leeuwen for comment.