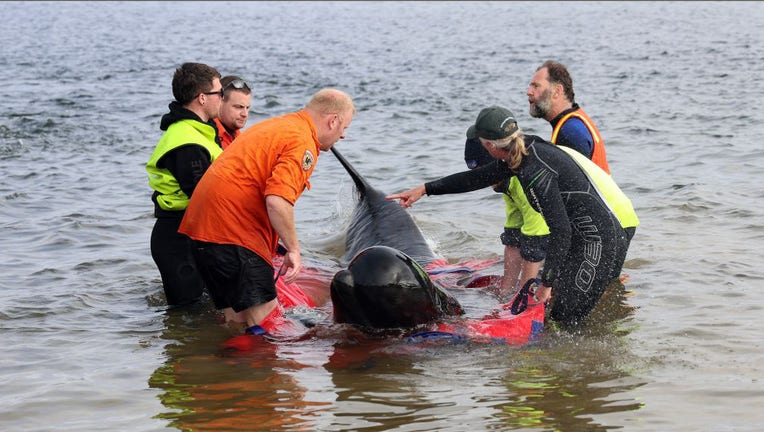 Rescuers release a stranded pilot whale back in the ocean at Macquarie Heads, on the west coast of Tasmania on Sept. 22, 2022. (Photo by GLENN NICHOLLS/AFP via Getty Images)

HOBART, Australia - Wildlife officials said 32 out of the 230 whales found stranded on a remote beach in Australia have been rescued.

The pod of pilot whales was found Wednesday on Ocean Beach, located on the island state of Tasmania. About half were presumed to be alive at the time, the Department of Natural Resources and Environment Tasmania said. 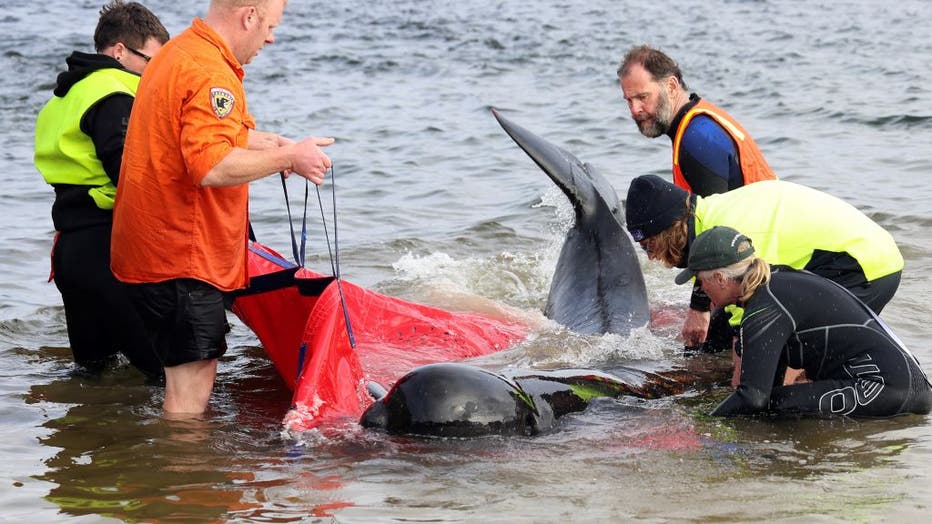 Rescuers release a stranded pilot whale back in the ocean at Macquarie Heads, on the west coast of Tasmania on September 22, 2022. (Photo by GLENN NICHOLLS/AFP via Getty Images)

"Of the 35 that were remaining alive this morning, we’ve managed to refloat, rescue and release … 32 of those animals, and so that’s a terrific result," Clark told reporters late Thursday at nearby Strahan.

"We still have three alive on the far northern end of Ocean Beach, but because of access restrictions, predominantly tidal influences, we just haven’t been able to access those three animals safely today. But they’ll be our priority in the morning," Clark added.

This handout image supplied by NRE Tas shows an aerial view of a mass whale stranding near Macquarie Heads on September 21, 2022, in Strahan, Australia. (Photo by NRE Tas via Getty Images)

The whales beached two years to the day after the largest mass-stranding in Australia’s history was discovered in the same harbor.

About 470 long-finned pilot whales were found on Sept. 21, 2020, stuck on sandbars. After a weeklong effort, 111 of those whales were rescued but the rest died.

The entrance to the harbor is a notoriously shallow and dangerous channel known as Hell’s Gate.

Videos captured the moment when a breaching whale landed on the bow of a small boat off of Plymouth, Massachusetts, on July 24, 2022. No injuries were reported and the boat wasn't seriously damaged. Credit: Ted Gardziel via Viralhog and Leo Enggasser/Amazing Animals+/TMX

Marine Conservation Program biologist Kris Carlyon said the dead whales would be tested to see if there were toxins in their systems that might explain the disaster.

"These mass stranding events are typically the result of accidental sort of coming to shore, and that’s through a whole host of reasons," Carlyon said.

The stranded whales this week also came just days after 14 sperm whales were found beached on an island off the southeastern coast.

Watch: Breaching whale jumps out of ocean and lands on top of a Massachusetts fishing boat