WASHINGTON — A week out from the midterm elections, the Pentagon said Monday it is sending 5,200 troops, some armed, to the Southwest border in an extraordinary military operation to help stop illegal crossings by a caravan of migrants moving slowly north in Mexico.

President Donald Trump himself, eager to focus voters on immigration in the lead-up to the elections, escalated his threats against the caravan, tweeting: "This is an invasion of our Country and our Military is waiting for you!"

His warning came as the Pentagon began executing "Operation Faithful Patriot," described by the commander of U.S. Northern Command as an effort to help Customs and Border Protection stiffen defenses at and near legal entry points. Advanced helicopters will enable border protection agents to swoop down on migrants, he said. 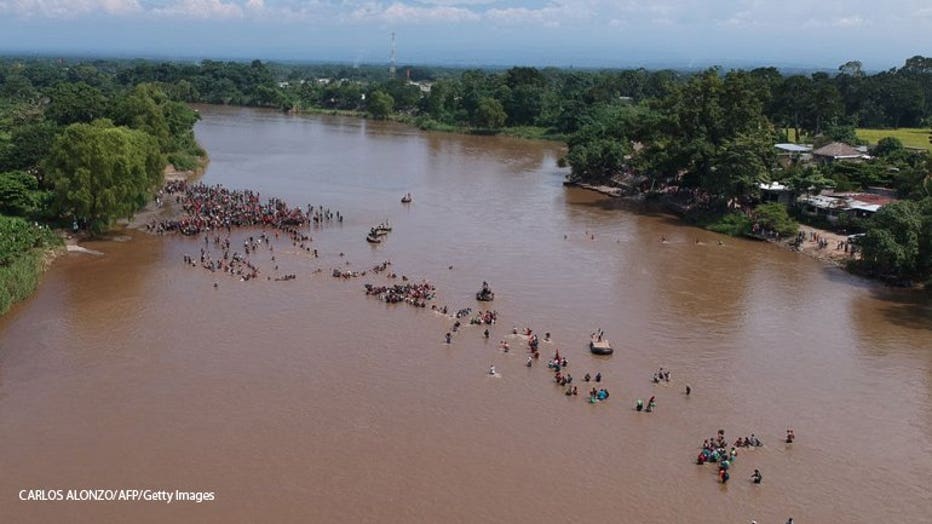 Aerial view showing migrants reaching Mexico after crossing the Suchiate River from Tecun Uman in Guatemala to Ciudad Hidalgo in Mexico on October 29, 2018, a day after a security fence on the international bridge was reinforced to prevent them from

Eight hundred troops already are on their way to southern Texas, O'Shaughnessy said, and their numbers will top 5,200 by week's end. He said troops would focus first on Texas, followed by Arizona and then California.

The caravan of 3,500 has shrunk from a peak of about 7,200 migrants a week ago, but a second caravan of about 600 had formed and was clashing with federal police on a bridge from Guatemala to Mexico.

"Sending active military forces to our southern border is not only a huge waste of taxpayer money, but an unnecessary course of action that will further terrorize and militarize our border communities," said Shaw Drake of the American Civil Liberties Union's border rights center at El Paso, Texas.

Military personnel are legally prohibited from engaging in immigration enforcement. The troops will include military police, combat engineers and others helping on the southern border.

Customs and Border Protection is pushing a surge in personnel in response to the caravan of Central American immigrants, which was still hundreds of miles from the U.S. border. The military troops are intended to assist the border patrol, not engage directly with migrants.

The White House is also weighing additional border security measures, including blocking those traveling in the caravan from seeking legal asylum and keeping them from entering the U.S.

The escalating rhetoric and expected deployments come as the president has been trying to turn the caravan into a key election issue with just days to go before the midterm elections that will determine whether Republicans maintain control of Congress.

He continued his threats on Monday, tweeting, without providing evidence, that, "Many Gang Members and some very bad people are mixed into the Caravan heading to our Southern Border."

"Please go back," he urged them, "you will not be admitted into the United States unless you go through the legal process. This is an invasion of our Country and our Military is waiting for you!"

The president's dark description of the caravan belied the fact that any migrants who complete the long trek to the southern U.S. border face already major hurdles, both physical and bureaucratic, to being allowed into the United States. Migrants are entitled under both U.S. and international law to apply for asylum, but it may take while to make a claim. There is already a bottleneck of asylum seekers at some U.S. border crossings, in some cases as long as five weeks.

A possible announcement by President Trump on the other border measures had been tentatively slated for Tuesday, administration officials had said, but he is instead traveling to Pittsburgh, where a gunman massacred 11 people at a synagogue Saturday in what is believed to be the deadliest attack on Jews in U.S. history. Spokeswoman Sarah Huckabee Sanders said Monday pushed off questions about the caravan and possible border measures.

"We have a number of options on the table," she said, adding she'd let the public know of any upcoming immigration speeches but she was unaware of any right now.

The troops are expected to perform a wide variety of functions such as transporting supplies for the Border Patrol, but not engage directly with migrants seeking to cross the border from Mexico, officials said. One U.S. official said the troops will be sent initially to staging bases in California, Texas and Arizona while the CBP works out precisely where it wants the troops positioned. U.S. Transportation Command posted a video on its Facebook page Monday of a C-17 transport plane that it said was delivering Army equipment to the Southwest Border in support of Operation Faithful Patriot.

The U.S. military has already begun delivering jersey barriers to the southern border in conjunction with the deployment plans.

Mattis told reporters traveling with him Sunday that the deployment was still being worked out, but that the additional troops would provide logistical and other support to the Border Patrol and bolster the efforts of the approximately 2,000 National Guard forces already there. That includes functions such as air support and equipment, including vehicles and tents.

President Trump has spent the last week trying to call attention to the caravan traveling by foot through Mexico. It remains hundreds of miles from U.S. soil.