Parents honor son hit, killed while running across US on a misison

Mark and Julie Lambert talk with FOX Television Stations about honoring their son's legacy and continuing his mission.

STILLWATER, Okla. - It was the point in their son’s journey when Mark and Julie Lambert started to feel at ease.

They were initially worried and expressed concerns when 32-year-old Grady Lambert told them he was going to run across the country, from Oregon to South Carolina, to thank frontline workers at various hospitals for their efforts during the COVID-19 pandemic.

"He said, ‘I’m finishing this race one way or another, Mom,‘" Julie told FOX Television Stations.

On August 28, Grady was nearly halfway done with his journey when he was hit and killed by a pickup truck driver in Carson County, Texas, near Amarillo.

"The driver told the police that when he came over that crest [of the road], the sun hit his eyes and he did not see Grady," Julie said.

Grady’s mother said she knew something was wrong because she always tracked her son’s progress via Life360, a location-sharing app.

On that fateful day, the app told her Grady was traveling 96 miles per hour. After calling authorities in the Amarillo area, she found out her son was sent to Northwest Texas Hospital where he was in a coma.

The Lamberts rushed to the hospital. After a few days, Grady — an organ and tissue donor — succumbed to his injuries.

"We were with Grady when he passed," Julie added. "He passed so peacefully, and we got to witness that and hold his hand and be with him. And I am so grateful for that."

Grady Lambert’s mission across the US

The Lamberts said their son was working as a bartender in Portland, Oregon, when the COVID-19 lockdown started, shuttering restaurants and bars.

"He struggled with seeing all of his co-workers having such a hard time with it," Julie said.

However, Grady was more struck by the toll the pandemic took on healthcare workers. He came up with a plan to stop by as many hospitals as he could to show them gratitude. 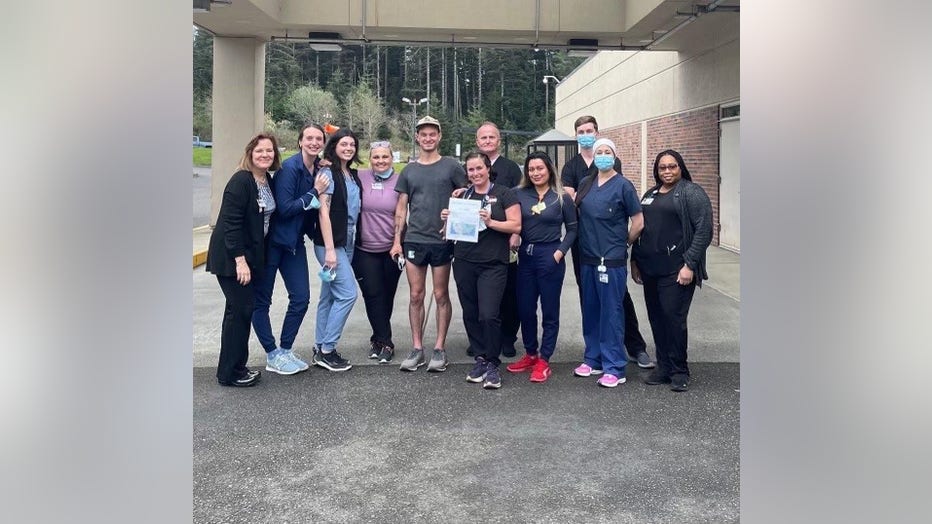 "He just wanted to show compassion for people," Mark said.

Grady started his journey on March 16 from Canon Beach, Oregon. He intended to reach Hilton Head, South Carolina, by the beginning of 2023, running mostly along Interstate 40 and stopping at hospitals along the way.

Mark said his son had run a little over 2,100 miles before his death. He was planning to meet up with his family in Stillwater, Oklahoma, and stay for a few days before continuing on his journey.

"He was approaching the halfway mark," Mark said. "He was just finishing what we considered the most difficult, and to some degree dangerous, lag in the desert."

The Lamberts said they’ve been on an emotional rollercoaster since their son’s tragedy.

The Lamberts said they have now started a scholarship fund in honor of their son’s memory and are accepting donations. They also have a GoFundMe page.

The scholarship will be awarded to a student at Lincoln Academy, where Grady once helped build a library as part of the Eagle Scouts. Graduates will have to pursue a healthcare career to be eligible.

Right now, the Lamberts are figuring out a plan on how to do that after receiving several requests from people to join them. They do plan to continue to stop at hospitals as Grady intended.

The parents said announcements will be made on Grady’s Instagram page, which he originally launched to document his run.

"All we do know ... that he [the driver] was pretty distraught, as you might imagine," Mark said. "We know it was certainly an accident."

Mark said he has come to a point where he has forgiven the driver; however, Julie said she’s in the process.

"When I say that, I think about Grady’s mission of compassion, and I try to have compassion for the driver," Julie continued. "Maybe he is just too overcome and couldn’t even fathom facing Grady’s parents."

"My heart hurts for him immensely, but I think I would appreciate ... him contacting us sooner or later. I think that would do my heart good," she said.

FOX Television Stations has reached out to the Texas Department of Public Safety for comment.