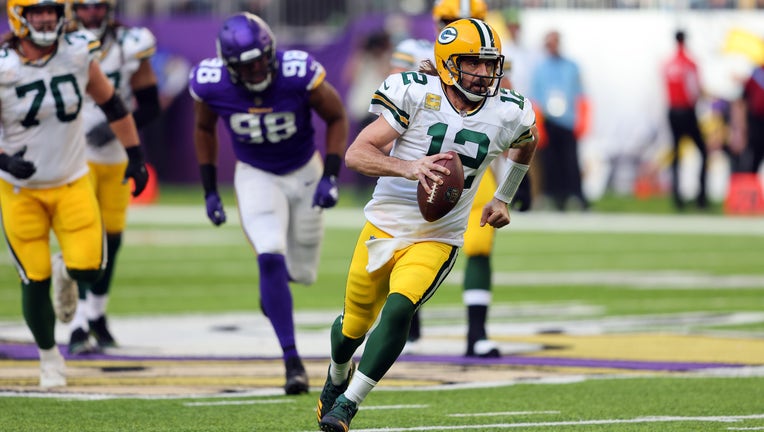 MINNEAPOLIS, MINNESOTA - NOVEMBER 21: Aaron Rodgers #12 of the Green Bay Packers scrambles with the ball in the third quarter at U.S. Bank Stadium on November 21, 2021 in Minneapolis, Minnesota. (Photo by Adam Bettcher/Getty Images)

MINNEAPOLIS - Greg Joseph made a 29-yard field goal as time expired to give the Minnesota Vikings a 34-31 victory over the Green Bay Packers on Sunday, finishing a classic back-and-forth with Aaron Rodgers by making sure the three-time NFL MVP didn't get to touch the ball last.

Kirk Cousins passed for 341 yards and three touchdowns for the Vikings (5-5), who watched yet another game come down to the final play after Rodgers threw three of his four touchdown passes in the second half.

Unable to practice much at all this week because of a toe injury, after missing much of the first half of the month with COVID-19, Rodgers finished 23 for 33 for a season-high 385 yards.

Justin Jefferson had eight receptions for 169 yards and two scores, including a third-down catch against rookie Eric Stokes that Cousins delivered for a 23-yard touchdown while being decked on a blitz by Darnell Savage. Dalvin Cook ran in the 2-point conversion to make up for an earlier missed extra point by Joseph.

Then on the next play from scrimmage, Rodgers threw a rainbow to Marquez Valdes-Scantling streaking past safety Xavier Woods for a 75-yard score to tie the game just before the two-minute warning.

When the Vikings regained the ball, Cousins nearly cost himself the comeback by slightly underthrowing Jefferson, whom Savage darted in front of to intercept the ball. He bobbled it on the way down, though, and a replay review overturned the call.

Cousins then went 3 for 3 for 51 yards on the next three snaps, Cook ran for one more first down, and then the Vikings kneeled down to set up the final kick by Joseph. They posted the highest score against the Packers since their 38-3 loss to New Orleans in the season opener.

Green Bay (8-3) gave up just 34 points over the previous three games. Preston Smith had two sacks, but the Packers didn't have the same pass rush with outside linebacker Rashan Gary (elbow) sidelined. Za'Darius Smith and Whitney Mercilus are also out with long-term injuries.

The Milwaukee Bucks beat the Orlando Magic 117-108 at Fiserv Forum on Saturday, Nov. 20. Giannis Antetokounmpo had 32 points and 20 rebounds.