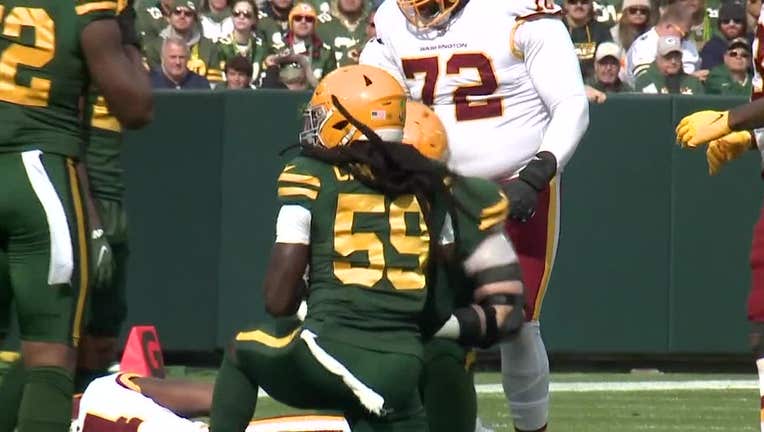 De'Vondre Campbell makes a tackle against the Washington Football Team

He used it as motivation to become the first Packers inside linebacker to earn first-team All-Pro honors since Hall of Famer Ray Nitschke in 1966.

As he detailed in an Instagram post last week, Campbell heard last season that he didn’t look the same, that he was on the back end of his career and that his performance was slipping.

"Everybody just kind of counted me out," Campbell said Thursday. "I dealt with a lot of stuff last year in Arizona that I never talked about because nobody really cares. At the end of the day, people just care about results. I was just honest with myself. I was injured, I didn’t feel like I played the best but I didn’t feel like I played terrible, but that’s not what everybody else thought. Honestly, I don’t really care about other people’s opinions, but I just knew what was at stake, so I bet on myself, as I always will."

What a winning bet that was.

Campbell, 28, said he had five or six offers in free agency, but joined the Packers because he considered it the best possible situation for him. The Packers signed him to a one-year, $2 million deal.

Now he has a chance to get back to the Super Bowl for the first time since his rookie season with the Atlanta Falcons. The top-seeded Packers (13-4) open their playoff run Saturday night when they host the San Francisco 49ers (11-7).

"We wouldn’t be where we’re at without him right now, I’ll tell you that," wide receiver Davante Adams said.

The Packers’ appreciation of Campbell was evident last week after the All-Pro announcements were made. Adams earned All-Pro honors for a second straight season, but said he was more excited about Campbell’s selection.

Campbell endeared himself even more to his teammates when he responded to the All-Pro honor by thanking them for making him feel important.

"That got to me, it really did," quarterback Aaron Rodgers said. "The older you get, I think it’s easier to get a little misty from time to time. You can watch an episode of ‘After Life,’ ‘Ted Lasso,’ and find yourself kind of crying to yourself and going, ‘Man, this is really hitting me.’ But that moment definitely got me because it’s so important to myself and our leadership and the culture we’ve tried to create to make guys feel important, to make guys feel special, to make guys feel like they’re a part of something." 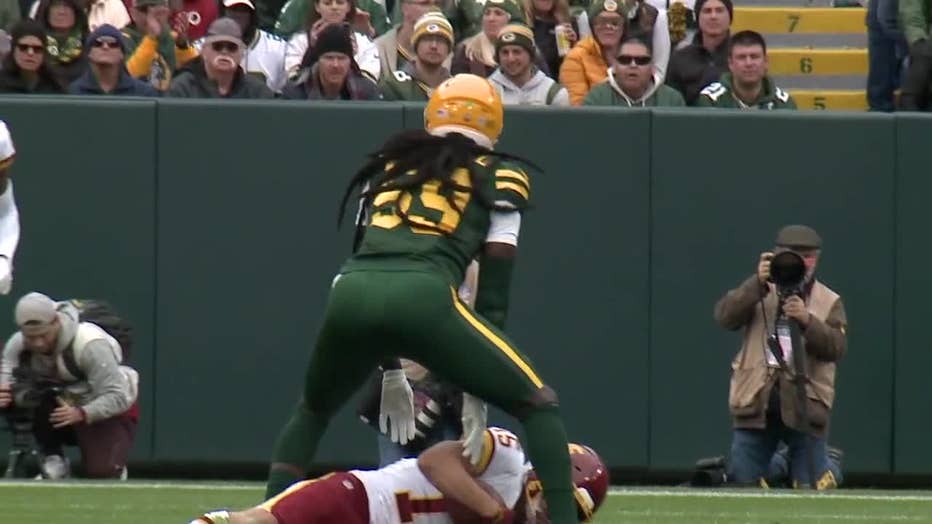 De'Vondre Campbell makes a tackle against the Washington Football Team

"I was sitting on the ground stretching and Aaron came up and introduced himself to me," Campbell said. "At first, I was like, ‘Is he joking? I know who you are.’ It’s little things like that, like, nobody being too big. It’s just a blessing and an honor to be a part of such a historical organization."

Campbell wasted no time proving his worth. He was the first player since Indianapolis’ Darius Leonard in 2018 to have at least 145 total tackles plus multiple interceptions, sacks and forced fumbles in the same season.

"Since Day 1, I’ve always felt like I was a top-10 backer in this league," Campbell said. "If people watch the tape, they would’ve seen that themselves."

Yet he’d never been this productive in his five previous seasons with the Falcons (2016-19) and Cardinals (2020). Pro Football Focus gave Campbell an 84.3 rating this season, well above his previous career high of 69.1 in 2017.

Campbell says the change came from how the Packers used him.

"Everybody’s whole question is, ‘What’s so different? How did you just become this elite player all of a sudden?’" Campbell said. "I’ve been the same player my whole career. My job responsibilities have just been different. I’ve never been a true MIKE. I’ve never been put in a position to make plays week in and week out. That was something I was very adamant about coming into the offseason. I was going to sign somewhere that allowed to me to be the guy.

"Like I said, Green Bay allowed me that opportunity and I’m just thankful for it — for them believing in me when a lot of people didn’t."

The Green Bay Packers announced via Twitter on Friday, Jan. 21 that they have activated linebackers Za'Darius Smith and Whitney Mercilus off injured reserve.

Foamation ships cheeseheads to fans near and far

Brian Kramp is at Foamation– Home of the Original Cheesehead Factory, where they're shipping products to Packers fans worldwide!