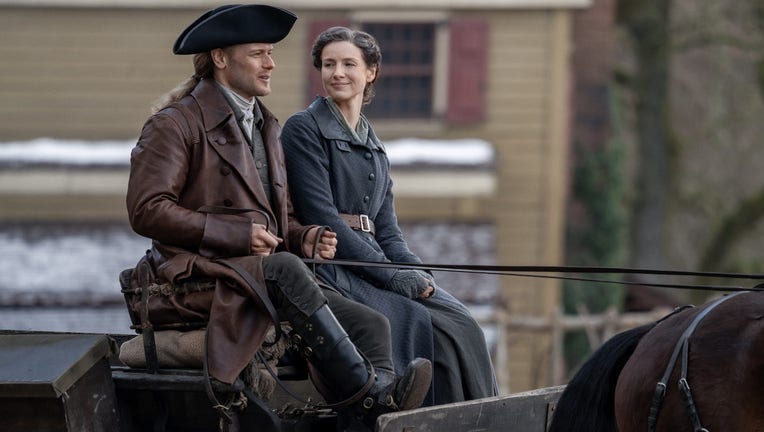 "Outlander," the hit Starz series adapted from Diana Gabaldon’s best-selling, genre-bending novels, returned to television on Sunday, Mar. 6 with a super-sized premiere. Clocking in at 80 minutes, it might feel just a wee bit long to even the most dedicated fans, though that’s a feature, not a bug. The sixth season, based on Gabaldon’s novel "A Breath of Snow and Ashes," will include only eight episodes, though each will have an extended runtime — a decision made to accommodate the complexities of producing a series of this scale during the ongoing COVID-19 pandemic.

But episodes can be too long for very different reasons, and "Echoes," the show’s gripping sixth-season premiere, slightly overstays its welcome for all the best ones. Written by showrunner Matthew B. Roberts and directed with aplomb by "Call the Midwife" alum Kate Cheeseman, this is an episode densely packed with story and the lovely character beats that define many of the show’s best outings. A few moments of thinking, "okay, let’s move this along" seems like a fair trade when the result is otherwise so strong.

For those unacquainted with "Outlander," the series follows Claire Fraser (Caitríona Balfe of "Belfast"), formerly Claire Randall, a World War II nurse who, during a second honeymoon with her husband Frank (Tobias Menzies) in the Scottish Highlands following the end of the war, finds herself mysteriously transported back to 18th century Scotland. There she meets Jamie Fraser (Sam Heughan), a Highland warrior, polyglot and extremely handsome man. Sparks, swords and a "marriage of convenience" follow, and before you can say "och, aye," Claire and Jamie are caught up in a romance for the ages.

Any attempt to summarize the many twists and turns of the following five seasons of the series is doomed to fail; suffice it to say they’re forced to part ways, have a daughter, Brianna (Sophie Skelton), who’s now a grown woman with her own handsome Scottish husband (Richard Rankin), and together they all wind up homesteading in the mountains of North Carolina as the Colonies hover on the edge of revolution.

The compelling if uneven fifth season ended with Claire enduring a horrific assault at the hands of a band of brigands from the nearby settlement of Brownsville; her recovery (or lack thereof) acts as the spine of the episode. The echoes of that event resonate throughout — everyone else is reeling, but Claire is conspicuously (and worryingly) "fine." It seems that Claire, like the remarkable performer who brings her to life, is a damn good actor, but how long can that performance possibly last? 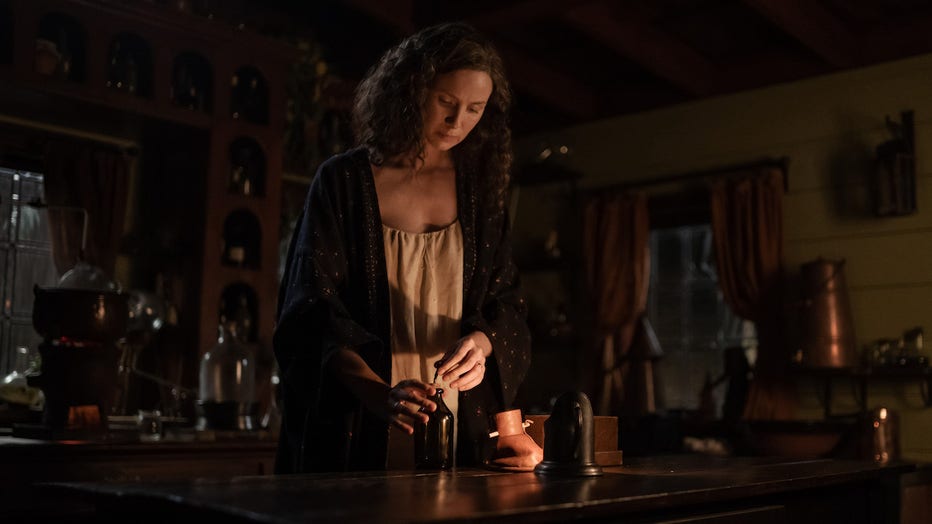 Any episode that centers on Claire’s emotional experience is sure to be a strong one, and Balfe, as always, delivers. A lesser actor would show us the cracks in Claire’s veneer of wellness, but Balfe puts her trust in the strength of the story and the intelligence of the audience. Claire isn’t merely convincing her loved ones that she’s recovering; she’s convincing herself, and that’s a choice more affecting (and eventually devastating) than the alternative.

But while Balfe may be the episode’s spine and standout, she’s far from the only bright light. Much of the episode concerns itself with the arrival of a new family on the ridge. We meet Tom Christie (Mark Lewis Jones), one of the men who served time with Jamie in Ardsmuir Prison after the Jacobite Rising, in an extended flashback that opens the episode, laying the groundwork for what’s likely to be a season-shaping conflict between Fraser and the competitive, intelligent and dogmatic Presbyterian schoolmaster.

Christie’s arrival on the Ridge is predictably tense, a situation sharpened by the interest his daughter Malva (Jessica Reynolds) displays in Claire’s medical practice and the "definitely bad news" vibes radiating off his son Allan (Alexander Vlahos) in waves. 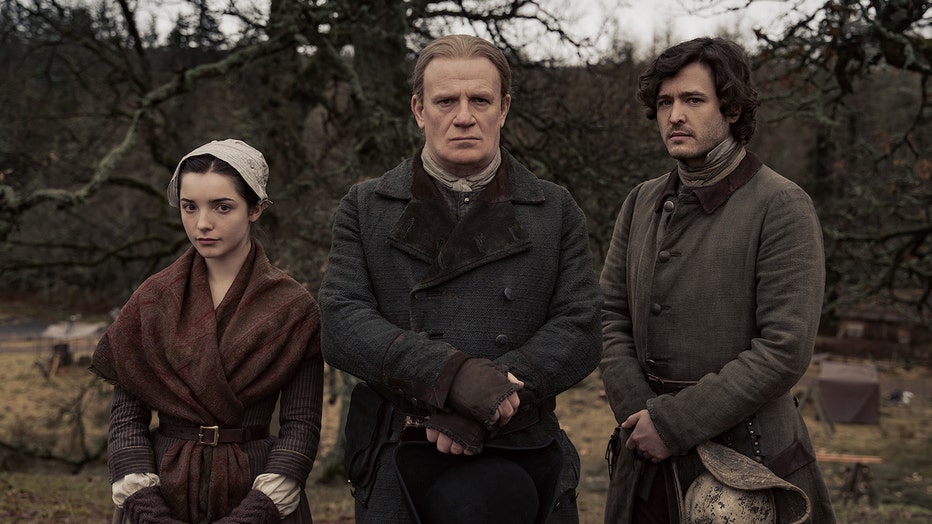 While the family may be a complicated-to-unwelcome new presence on the Ridge, as additions to the cast, they’re anything but. Jones in particular makes an impression, giving Christie a rich and unsettling internal life that seems to seep out from behind the stoic mask he wears.

In addition to Claire’s journey and the arrival of the Christies, this episode makes room for some "Outlander" greatest hits: a romantic (and very hot, if brief) sex scene; some good old-fashioned debates about the moral, ethical and practical elements of time-travel; whiskey; mountain scenery; tense standoffs; the list goes on.

And there are multiple opportunities for Lauren Lyle, one of the show’s secret weapons, to shine as Marsali Fraser, a woman dealing with her own traumatic experience, a potentially worrying pregnancy and a husband (Cesar Domboy) whose methods of dealing with his own fear and self-loathing make her life that much more difficult. In a cast full of top-notch performers, Lyle might just be the best.

But the moment that perhaps sums up the episode’s successes best involves none of the stories or people mentioned above. In preparing for a neighborhood feast, two members of the Fraser household begin setting out dish after marvelous dish, waging a silent war as they do, shuffling things this way and that in a battle for culinary prominence. Does it impact the plot? Not in the least, and it’s unlikely to do so in the future. But it’s the kind of scene that anchors "Outlander," bonkers premise and all, firmly in our world. It’s a weirdo time travel show, yes, but the people are unmistakably familiar: flawed, complex, beautiful and terribly human.

About the writer: Allison Shoemaker is a Chicago-based pop-culture critic and journalist and a co-host and producer of Podlander Drunkcast: an Outlander Podcast. She is the author of "How TV Can Make You Smarter," and a member of the Television Critics Association and the Chicago Film Critics Association. Find her on Twitter and Instagram at @allisonshoe. Allison is a Tomatometer-approved Top Critic on Rotten Tomatoes.

Other highlights from the week in streaming 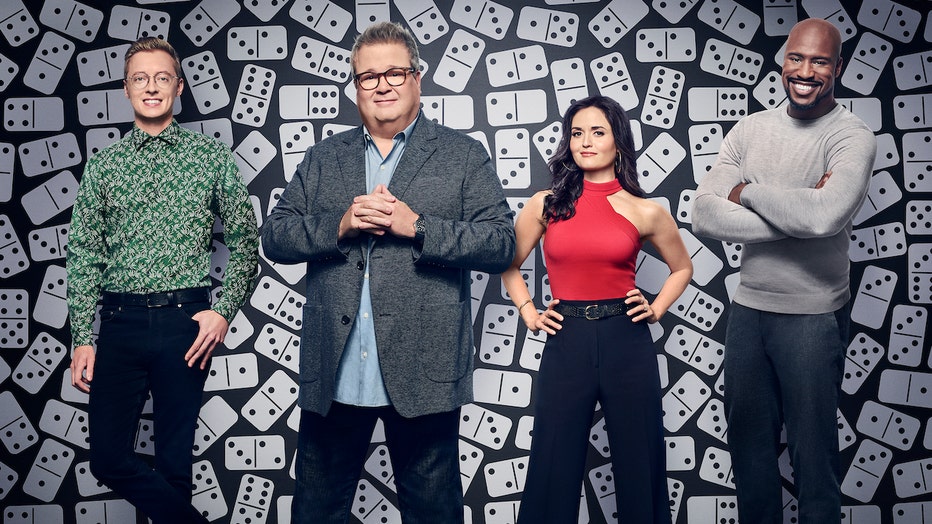 Pair "Outlander" with these swoon-worthy stories, streaming (for free!) on Tubi

10 Truths About Love (2022): Camilla Belle stars as Carina Franklin, a thriving romance columnist who has her own love life totally figured out — at least until her longtime boyfriend dumps her. Even worse, her editor insists on giving her column a "male perspective" and hires a writer named Liam (David Lafontain) to balance her out. When the two new co-workers clash, Liam sets out to demonstrate that his tactics work by helping Carina win back her ex. Of course, in trying to prove each other wrong, Liam and Carina might just realize how right they really are for each other. "10 Truths About Love" is a Tubi Original. Rated TV-14. 90 minutes. Dir: Brian K. Roberts. Featuring: Camilla Belle, David Lafontaine, Jennifer De Lucia, Karn Kalra, Paula Rivera, David Keeley.

A Walk to Remember (2002): For better or for worse, "A Walk to Remember" is the movie that really kicked off the Nicholas Sparks adaptation craze — paving the way for romantic dramas like "The Notebook" and "Safe Haven." (It’s the first Sparks spark, if you will.) Mandy Moore stars as Jamie Sullivan, the self-possessed teenage daughter of a Baptist minister. Thrown together with popular, rebellious classmate Landon Carter (Shane West), Jamie begins to influence him for the better, even as their burgeoning teen love story has a ticking time clock. Throw in six songs performed by Moore and you’ve got the makings of a beloved early aughts weepy. Rated PG. 101 minutes. Dir: Adam Shankman. Also featuring Peter Coyote, Daryl Hannah, Lauren German.