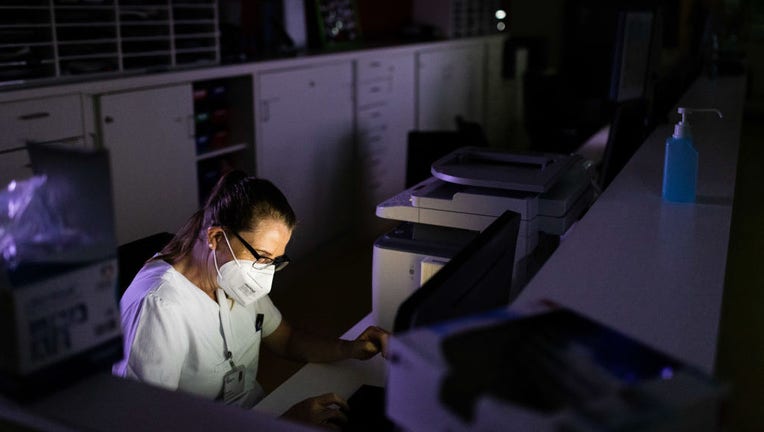 FILE - A medical professional works the night shift at a hospital on July 23, 2021. (Photo by Philipp von Ditfurth/picture alliance via Getty Images)

A new study suggests that timing meals may have an impact on one’s mental health, including levels of depression and anxiety — results that could benefit shift workers with chaotic sleep and eating schedules thrown off by working at odd hours.

Shift work refers to any work schedule that falls outside the usual daytime hours and can include evening, night, and early morning shifts and rotating schedules.

It’s estimated that about 20% of the workforce is made up of shift workers in industrialized societies, according to researchers from Brigham and Women's Hospital in Boston. These roles can include medical professionals, first responders, assembly line workers, truck drivers, and more.

Working at night and sleeping during the day — or a work schedule close to that — can cause "a misalignment" between the person’s central circadian clock in the brain and their daily behaviors, such as sleep/wake and fasting/eating cycles, the researchers wrote in the new study.

They write that these workers have a 25% to 40% higher risk of depression and anxiety.

The benefits of good sleep

Most adults need 7 or more hours of quality sleep each night, according to the National Institutes of Health. Kids and teens need even more.

Eating during both day and night found to increase depression, anxiety levels

Participants in the daytime-only eating group did not experience the increase, suggesting that the time of eating could have an influence on mood.

"Shift workers — as well as individuals experiencing circadian disruption, including jet lag — may benefit from our meal timing intervention," co-corresponding study author Sarah L. Chellappa, MD, Ph.D., who completed work on this project while at Brigham, said in a statement.

"Our study adds to a growing body of evidence finding that strategies that optimize sleep and circadian rhythms may help promote mental health," Chellappa added.

RELATED: US to award $35M in grants to tribes for 988 mental health crisis line

For the study, Chellappa and colleagues enrolled 19 participants (12 men and 7 women), who were determined to be free from medical conditions, including a current or previous history of depression and anxiety.

The researchers said more studies are needed to better establish if changes in meal timing can help individuals experiencing depressive and anxiety-related disorders.

"These data offer evidence for meal timing interventions that may potentially help in mental illness prevention among shift work populations and other individuals experiencing circadian rhythm disturbances," the study concluded.

The study was published on Monday in the Proceedings of the National Academy of Sciences. It was funded by various grants, as well as the Alexander Von Humboldt Foundation and the American Diabetes Association.

Facts about mental health and the Black community

In 2019, suicide was the second leading cause of death for African Americans between 15 and 24 years old.

A small clinical trial supported by the National Institutes of Health in 2021 suggested that daytime meals could help reduce other health risks.

Researchers found that nighttime eating boosted glucose levels, a risk factor for diabetes, while restricting meals to the daytime prevented this effect.

Average glucose levels for those who ate at night increased by 6.4% during simulated night work, while those who ate during the daytime showed no significant increases, according to the study.

"This is a rigorous and highly controlled laboratory study that demonstrates a potential intervention for the adverse metabolic effects associated with shift work, which is a known public health concern," Dr. Marishka Brown, director of the National Heart, Lung, and Blood Institute’s National Center on Sleep Disorders Research, said of the results in 2021.

Survey: Nearly half of Americans admit talking to their plants, and it might make them happier