MINNEAPOLIS -- Chants of “What's his name? George Floyd!” filled the air Monday as a large crowd gathered at the spot where the black man who became the latest symbol of racial injustice in America lay dying as a white police officer pressed his knee into his neck.

Wearing a face mask with George’s Floyd's image on it, his brother Terrence Floyd dropped to his knees at the storefront that has been turned into a memorial covered with flowers and signs. As he kneeled silently, many who were around him joined him on the ground. 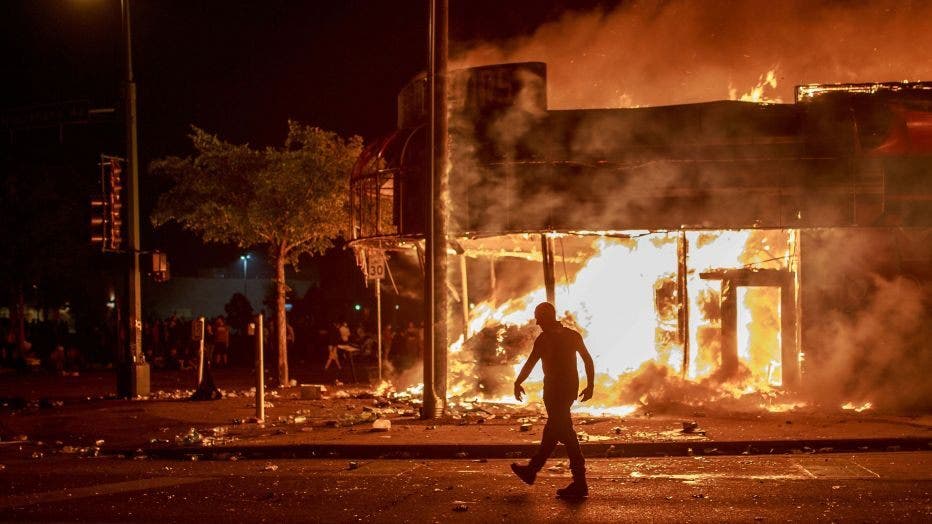 A man walks past a liquor store in flames near the Third Police Precinct on May 28, 2020 in Minneapolis, Minnesota, during a protest over the death of George Floyd.

The memorial site was a space of calm compared to the devastation left in the wake of fires and violence that paralyzed the city for days last week before it spread nationwide.

“I understand y’all are upset. I doubt y’all are half as upset as I am,” said Terrence Floyd, who lives in New York. “What are y’all doing? ... That’s not going to bring my brother back at all.”

George Floyd, 46, died last week after he was arrested in Minneapolis, accused of using a forged $20 bill to pay for goods at a grocery store. The white officer, Derek Chauvin, has been charged with murder.


Terrence Floyd took several minutes sitting in the spot where the officer pinned his brother, and he sobbed.

Addressing the crowd, he said he did not understand why the three other police officers who arrested Floyd and who were fired with Chauvin have not also been arrested and charged.

Still, he said, the Floyd family, which he described as “peaceful” and “God-fearing,” wants calm protests at this time with hopes that justice will follow.

“In every case of police brutality the same thing has been happening. You have protests, you destroy stuff ... so they want us to destroy ourselves. Let’s do this another way,” he said, encouraging the crowd to vote and to educate themselves. “Let’s switch it up, y’all.”

Before his death, George Floyd — like millions of Americans during the coronavirus pandemic — was out of work and looking for a new job.

He and some friends moved to Minneapolis from his native Houston around 2014 to find work and start a new life, his lifelong friend Christopher Harris has said. But he was laid off when Minnesota shut down restaurants as part of a stay-at-home order.

“My brother moved here from Houston. He loved it here,” Terrence Floyd said Monday. "So I know he would not want you all to be doing this.”

He said he appreciates the show of support and love for his brother and their family.

Civil rights leader Rev. Kevin McCall of New York, said he brought Terrence Floyd, community members and others out to the memorial site to urge calm.

At the end of his remarks, Terrence Floyd led the crowd in more chants.

“George Floyd!” the crowd answered back.