MILWAUKEE -- The Transportation Security Administration revealed on Thursday, Jan. 26 that its officers stopped 24 handguns at the Wisconsin airport checkpoints in 2019. That is an increase from the 20 caught in 2018.

Officials say Wisconsin’s statistics mirrored the national trend of an increase in the number of firearms detected at airport checkpoints across the country.

Nationwide, TSA officers caught more firearms at checkpoints in 2019 than ever before in the agency’s 18-year history. In total, 4,432 firearms were discovered in carry-on bags or on passengers at checkpoints across the country last year, averaging about 12.1 firearms per day, approximately a 5% increase nationally in firearm discoveries from the total of 4,239 detected in 2018. Eighty-seven percent of firearms detected at checkpoints last year were loaded.

Travelers who bring firearms to the checkpoint are subject to criminal charges from law enforcement and civil penalties from TSA. Even if a traveler has a concealed weapon permit, firearms are not permitted to be carried onto an airplane. However, travelers with proper firearm permits can travel legally with their firearms in their checked bags if they follow a few simple guidelines. 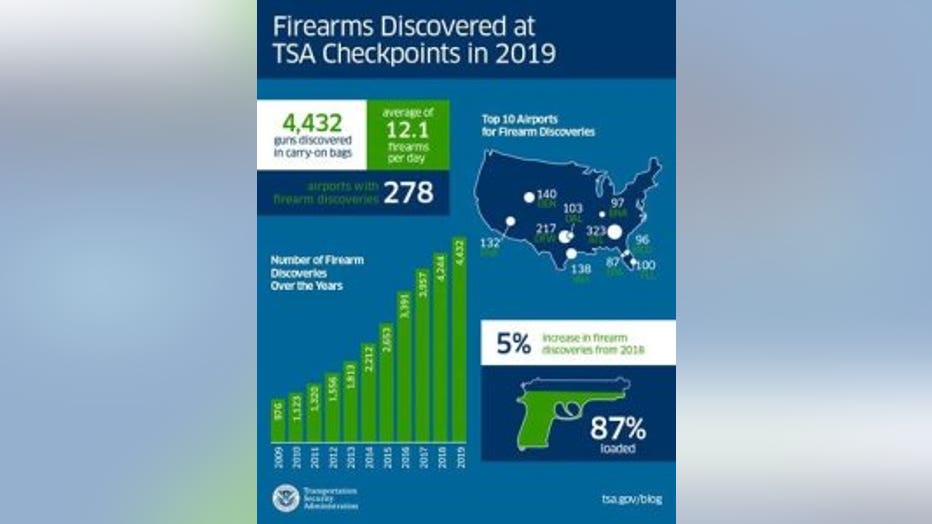 Firearm possession laws vary by state and locality. TSA advises travelers to familiarize themselves with state and local firearm laws for each point of travel prior to departure to ensure that they have the proper gun permits for the states that they are traveling to and from. Airlines may have additional requirements for traveling with firearms and ammunition so travelers should also contact the airline regarding firearm and ammunition carriage policies prior to arriving at the airport.

Passengers are permitted to travel with firearms in checked baggage if they are unloaded, packed in a hard-side case, locked, and packed separately from ammunition. Ammunition must be in its original box and can be packed inside the hard-side case, next to the firearm. Even if the box of ammunition is not full, the bullets must be in their original case. Then the case with the firearm should be brought to the airline check-in counter and the airline representative informed that the passenger wants to travel with the gun. Firearms are transported inside checked baggage and are placed in the belly of the aircraft.

TSA has details on how to properly travel with a firearm posted on its web site here: https://www.tsa.gov/travel/transporting-firearms-and-ammunition.

As a reminder, individuals who bring weapons to a checkpoint are subject to federal civil penalties of up to $13,000. A typical first offense for carrying a handgun into a checkpoint is $4,100. The complete list of penalties is posted online here: https://www.tsa.gov/travel/civil-enforcement.