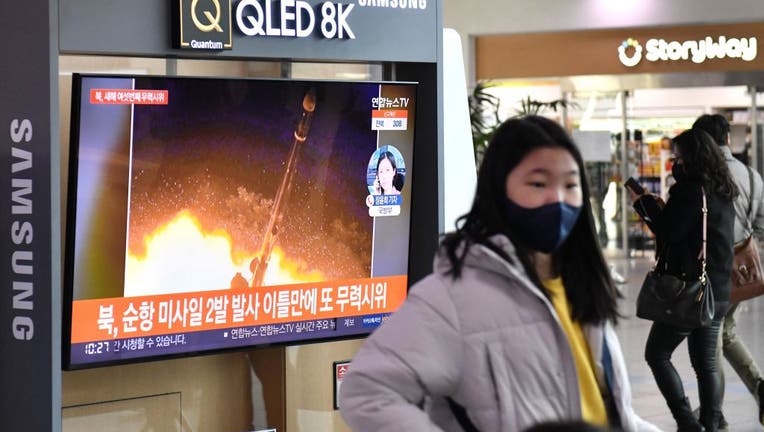 People walk past a television screen showing a news broadcast with file footage of a North Korean missile test, at a railway station in Seoul on January 27, 2022, after North Korea fired an "unidentified projectile" in the country's sixth apparent we

SEOUL, South Korea - North Korea on Sunday fired a suspected ballistic missile into the sea — its 7th round of weapons launches this month — in an apparent attempt to pressure the Biden administration over long-stalled nuclear negotiations.

Japan’s coast guard issued a maritime safety warning, saying that an object that was potentially a North Korean ballistic missile could have already landed, but there were no immediate reports of damage to boats or aircraft.

North Korea has been ramping up its testing activity in recent months, including seven rounds of weapons launches so far in 2022, demonstrating its military might amid pandemic-related difficulties and a prolonged freeze in nuclear diplomacy with the United States.

Experts say the North could halt its testing spree after the start of the Beijing Winter Olympics next week out of respect for China, its major ally and economic lifeline. But there’s also expectation that the North could significantly up the ante in weapons demonstrations once the Olympics end in February to grab the attention of the Biden administration, which has been focusing more on confronting China and Russia over its conflict with Ukraine.

"North Korea is launching a frenzy of missiles before the start of the Beijing Olympics, mostly as military modernization efforts. Pyongyang also wants to boost national pride as it gears up to celebrate political anniversaries in the context of economic struggles," said Leif-Eric Easley, a professor at Ewha University in Seoul.

"It wants to remind Washington and Seoul that trying to topple it would be too costly. By threatening stability in Asia while global resources are stretched thin elsewhere, Pyongyang is demanding the world compensate it to act like a ‘responsible nuclear power,’" Easley added.

North Korea has justified its testing activity as an exercise of its rights to self-defense and threatened stronger action after the Biden administration imposed fresh sanctions following two tests of a purported hypersonic missile earlier this month.

In a ruling party meeting chaired by Kim on Jan. 20, senior party members made a veiled threat to resume testing of nuclear explosives and long-range missiles targeting the American homeland, which Kim suspended in 2018 while initiating diplomacy with the United States.

Kim has repeatedly vowed to bolster his nuclear forces since his summitry with then-President Donald Trump derailed in 2019 with the Americans rejecting North Korea’s demands for major sanctions relief in exchange for a partial surrender of its nuclear capabilities.

While desperate for outside relief as his economy decays under crippling U.S.-led sanctions and pandemic-related difficulties, Kim has showed no willingness to surrender the nuclear weapons and missiles he sees as his strongest guarantee of survival. Analysts say Kim’s pressure campaign is aimed at forcing Washington to accept the North as a nuclear power and convert their nuclear disarmament-for-aid diplomacy into negotiations for mutual arms-reduction.

State media said Friday that Kim visited an unspecified munitions factory producing a "major weapons system," and that the workers pledged loyalty to their leader who "smashes with his bold pluck the challenges of U.S. imperialists and their vassal forces."

AP writer Mari Yamaguchi in Tokyo contributed to this report.