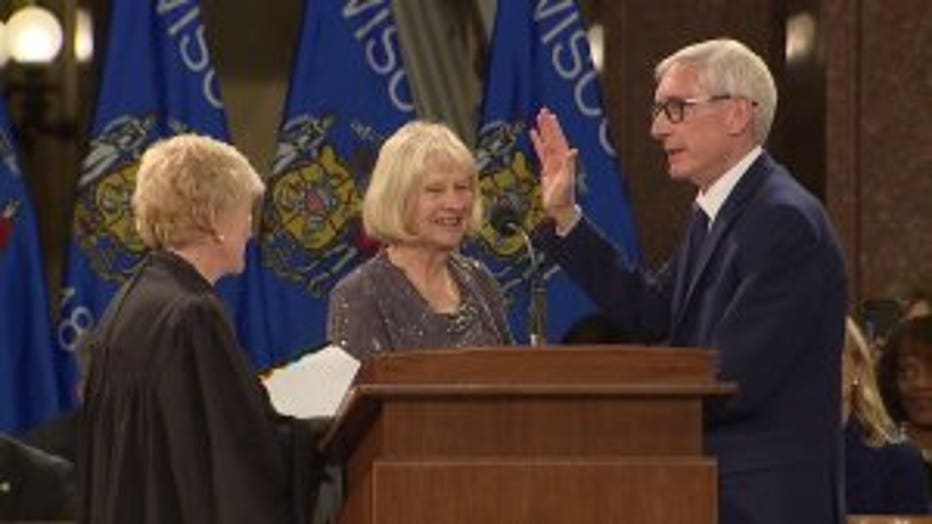 Tony Evers sworn in as Governor of Wisconsin

MADISON — Newly sworn-in Democratic Gov. Tony Evers called for a rejection of "the tired politics of the past" in his first speech as Wisconsin governor Monday, cautioning in his inaugural address that "we've become content with division."

Evers delivered the speech during a packed Capitol rotunda ceremony attended by a number of other office holders and five former governors, including Republican Scott Walker , whom Evers narrowly defeated in November.

Evers' ascendance as governor marks a new era in Wisconsin politics, ending eight years of Republican dominance. It also marks the first time since 1986 that all constitutional officers are Democrats. 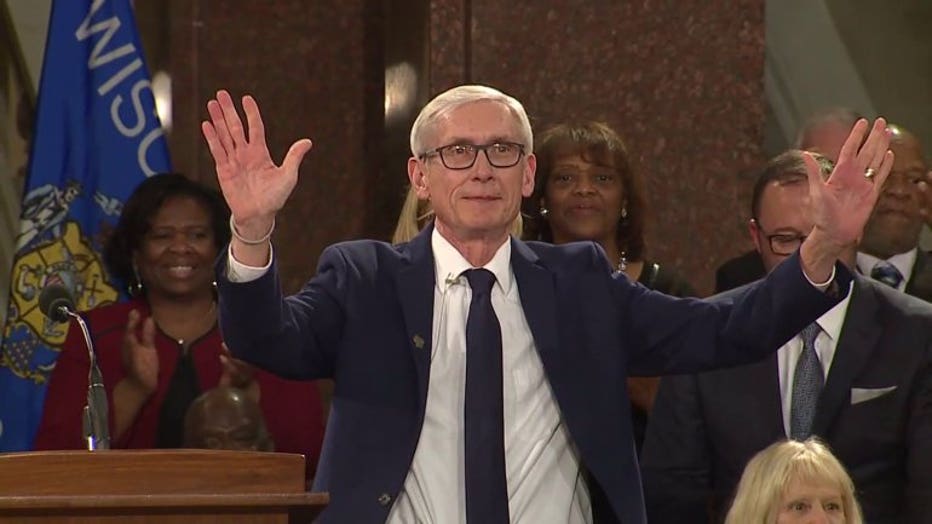 Evers called for a return to the values of kindness, respect and civility and urged Republicans and Democrats to set aside party allegiances to work for a greater good. Evers will need Republicans to advance much of his agenda, given that the Legislature he will be working with is under majority GOP control.

While some have said divided government is a recipe for gridlock, Evers called for compromise. Republicans are already preparing to write an alternative state budget, which Evers has threatened to veto. 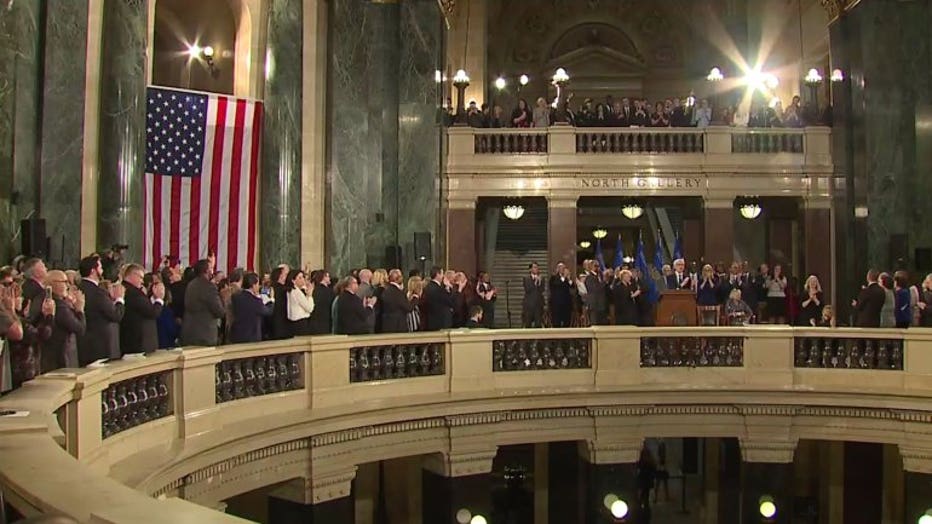 "We must turn the page on the tired politics of the past, we must lead by example," Evers said. "It's time to remake and repair our state and reclaim our better history. The people of Wisconsin demanded a change this November, and that change is coming." 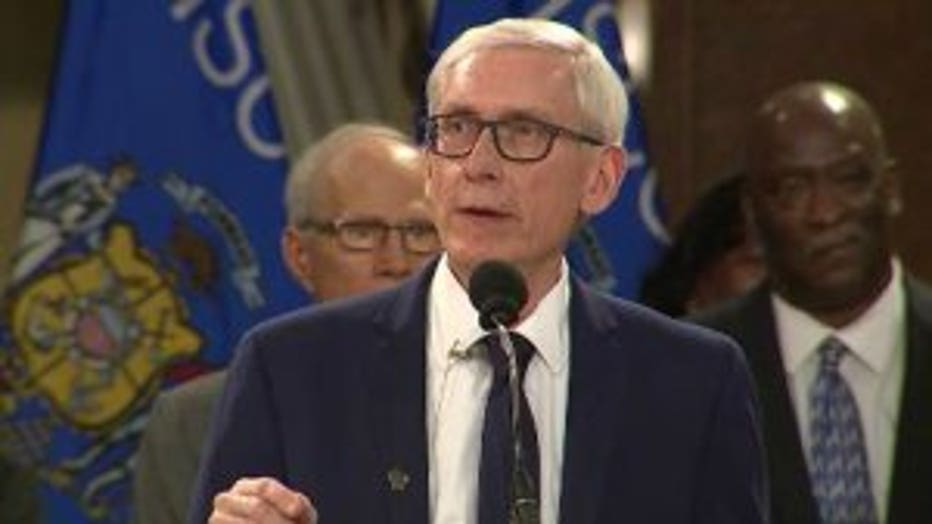 Evers said that change will begin on playgrounds and college campuses and in classrooms, coffee shops, churches, workplaces and the Statehouse.

"May we dare to transcend divisiveness and party line," he said. "May we have courage in our conscience. And may we be willing to do what's best for the next generation rather than the next election."

Evers emphasized his campaign priorities, including fully funding public schools "at every level" from pre-kindergarten through college; making health care more affordable and accessible; and improving the conditions of Wisconsin's roads.

"We cannot fix these problems unless people come before politics."

"We cannot fix these problems unless people come before politics," Evers said. "We've become paralyzed by polarity and we've become content with division. We've been indifferent to resentment and governing by retribution." 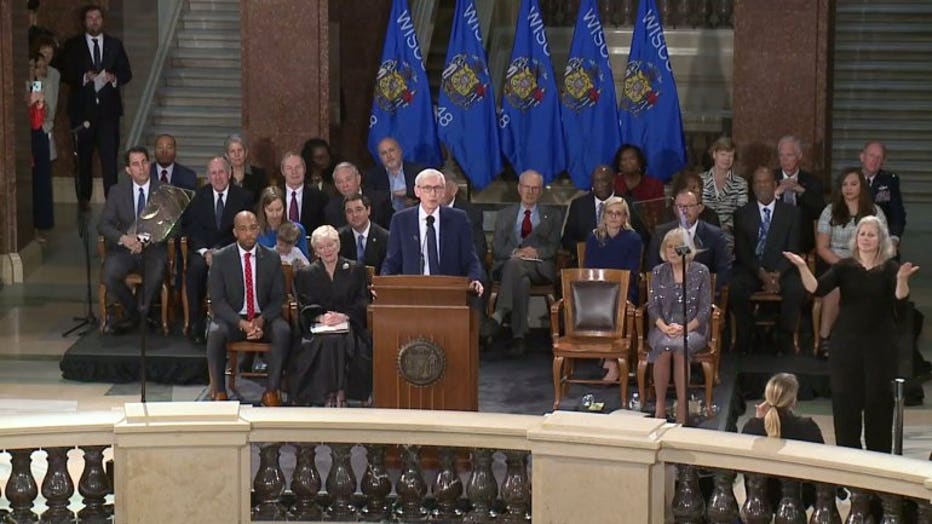 Walker and the GOP used their power to transform Wisconsin by enacting a host of conservative priorities, including all but eliminating collective bargaining for public workers and putting in place electoral boundaries that favor Republican incumbents.

Evers is expected to deliver his first State of the State speech later this month, then present his budget to lawmakers in late February or early March.

Walker and Doyle were joined by three other former Wisconsin governors at the inauguration: Tommy Thompson, Scott McCallum and Martin Schreiber. Among the others who attended were both of Wisconsin's U.S. senators, Ron Johnson and Tammy Baldwin, members of Congress, Milwaukee Mayor Tom Barrett and numerous past office holders.

In addition to Evers, all other constitutional officers elected in November were also sworn into office. Those were Lt. Gov. Mandela Barnes, Attorney General Josh Kaul, Treasurer Sarah Godlewski and Secretary of State Doug La Follette. La Follette is the only incumbent.

Barnes, the first African American lieutenant governor in Wisconsin history, said "the gravity of this moment is not lost on me as we strive for equity."

I want to thank Governor Walker and Lieutenant Governor Kleefisch and their families for their service to our state. I also want to thank my wife, Kathy, and my family, for their relentless support from Tomah to Verona to standing here today and everywhere in between—I love you all. Thank you.

And finally, to the people of Wisconsin. I’m humbled to be here today as a kid who grew up in Plymouth, met my wife in kindergarten, took her to junior prom, and went from scraping the mold off of cheese to teaching science to becoming state superintendent to now standing here before you. I’m grateful for your trust in me and the opportunity and privilege to serve you and our state. Thank you.

I’m Tony Evers, and I’m incredibly proud to be the 46th Governor of the great state of Wisconsin.
I’ve spent the past year traveling across our state talking about the issues that matter most to the people of Wisconsin.

We talked about how what’s best for our kids is what’s best for our state. And that means we need to fully fund our public schools at every level, so that every kid in our state has access to a quality education—no matter what the zipcode—from all-day pre-k to our university and technical college systems. We talked about making sure that healthcare is affordable and accessible and protects people who have pre-existing conditions. We talked about gravel roads, potholes, and bridges, and why we cannot wait any longer for a sustainable solution to our transportation crisis.

But today is bigger than these issues that we all care about. We cannot fix these problems unless people come before politics. We’ve become paralyzed by polarity and we’ve become content with division. We’ve been indifferent to resentment and governing by retribution.

We’ve gotten away from who we are and the values that make Wisconsin great—not Republican or Democratic values, but our Wisconsin values of kindness and respect, empathy and compassion, and integrity and civility.

This is bigger than me; this is about the people of Wisconsin. It’s about setting aside political interests and personal ambitions to work together on solving problems. It’s about putting people first.

People like the 870,000 families in Wisconsin who are struggling to make ends meet and can’t afford basic necessities like child care, food, and transportation.

People like the mom from Oconomowoc who spends two hundred dollars a day on medication because she’s among the 2.4 million Wisconsinites who have a pre-existing condition.

Like dairy farmers from Washburn to Door County losing their farms passed down for generations who have been the backbone of our state for the better part of a century.

Like kids across our state going to school in classrooms with thirty other kids because we’ve failed to fully fund our public schools.

Like our seniors from Rhinelander to Racine who can’t afford soaring drug prices or rising health care costs and who deserve to age and retire with dignity.

Like our young people who work multiple jobs just to stay here and afford their student loan payments and are looking to us to take gun violence and global warming seriously.

I took the oath today with the grace and humility of knowing that no single person can solve these problems alone—the challenges we face can only be fixed by finding solutions together.

170 years ago, our forefathers charged us with being industrious and innovative—they gave us a mandate to go forward. We face that calling here today. We must turn the page on the tired politics of the past, and we must lead by example. It’s time to remake and repair our state and to reclaim our better history.

The people of Wisconsin demanded a change this November, and that change is coming. But that change won’t happen without all of us. So, that hard work begins here today.

It begins in our classrooms and on our playgrounds, where our kids learn to be accepting and treat others with kindness and respect--regardless of whether their parents were born here, what their circumstances are, and no matter their identity.

It begins on campuses and in coffee shops, on sidewalks and houses of worship, where we will not fear diversity or our differences but find value in discourse and dialogue that make us better people and better citizens.

It begins with valuing the dignity of all our workers--from paper mills to nursing homes, restaurants to cranberry farms, and village halls to highways--by recognizing that every person has meaning and each job a purpose, none more important than any other.

Finally, it begins in these marble halls where, as elected officials, we are reminded that our obligation and our allegiance are to the people of this state, not any political leader or party. That is the promise and the spirit of our service. May we dare to transcend divisiveness and party line. May we have courage in our conscience. And may we be willing to do what’s best for the next generation rather than the next election.

We have significant challenges facing our state, and we will no doubt face setbacks in the days ahead. But we are more than the sum of our differences. And what unites us is far, far greater than what divides us.

I have never been more hopeful about our state and our kids’ future as I stand here today. We must dare greatly to go forward in the face of adversity and uncertainty. We must dare to make space for hope here once again. And today, we turn toward the future and we move forward, together.

Let’s polka tonight and get to work tomorrow.

Thank you, and On, Wisconsin!