(CNN) -- Here's how a simple act of kindness can become a worldwide inspiration and a public relations bonanza for the New York Police Department.

In a case of being in the right place at the right time, a tourist from Arizona, who happens to work in law enforcement herself, was visiting New York City earlier month when she noticed a man without shoes asking for change near Times Square. 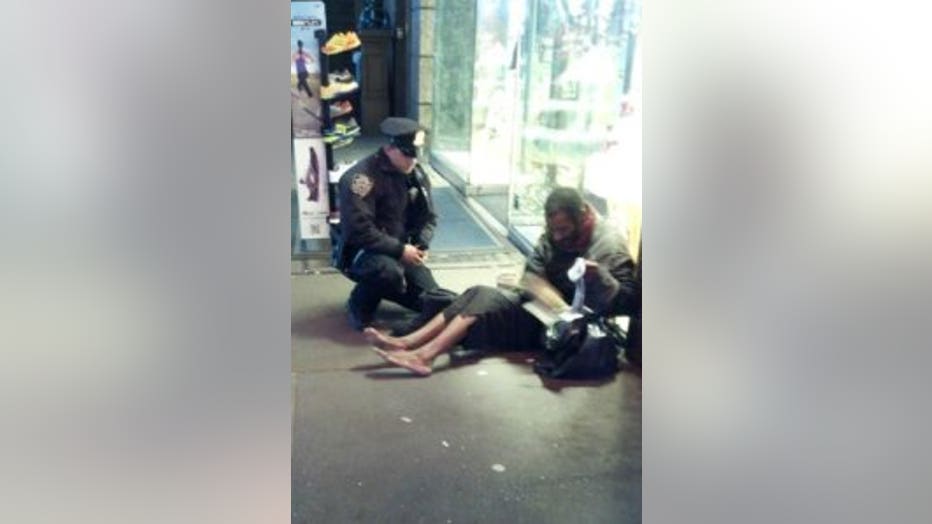 Jennifer Foster, of Florence, Arizona, sent the following note, along with a picture she took, to the NYPD, which posted it on its Facebook page.

"Right when I was about to approach, one of your officers came up behind him. The officer said, 'I have these size 12 boots for you, they are all-weather. Let's put them on and take care of you.' The officer squatted down on the ground and proceeded to put socks and the new boots on this man. The officer expected NOTHING in return and did not know I was watching. I have been in law enforcement for 17 years. I was never so impressed in my life. I did not get the officer's name. It is important, I think, for all of us to remember the real reason we are in this line of work. The reminder this officer gave to our profession in his presentation of human kindness has not been lost on myself or any of the Arizona law enforcement officials with whom this story has been shared."

That Facebook post has gone viral since it went up Tuesday, with more than 77,000 shares, 322,000 likes and 20,000 comments. Most of those comments, which come from places as far away as Australia and Malaysia, praise the officer for his simple act.

"Angels are everywhere, we just have to see!!!" Helen Hoglund wrote.

"This action gives me a warm feeling, even here in The Netherlands," said Elbert Donker.

Some of the praise didn't come without digs at New York and its finest.

"I wish more people were like this. This is in NY and would be the last place I would see this type of kindness," Teri Pizzurro wrote.

"It's the first time a policeman made me cry tears of joy. And I think that's true for a lot of us," commented Lola Lloyd.

"I really dont like cops ive been in the situation of being searched and arrested for spitting on the sidewalk but this guy gets some respect from me," said a post from Gavin Roman.

The NYPD says the officer remains anonymous on its Facebook post, but The New York Times tracked him down.

He's Lawrence DePrimo, 25, a two-year veteran of the department, according to the Times report.

He told the Times he saw the man walking down the sidewalk without shoes, felt for him in the frigid evening, found out his shoe size and popped into a nearby Skechers store to buy him a pair, spending $75.

Even the Skechers manager digs on New York.

"Most of us are New Yorkers and we just kind of pass by that kind of thing. Especially in this neighborhood," the Times quotes Jose Cano as saying.

And as this is New York, don't think there aren't those who consider the officer a victim, taken in by another scam.

"Clever stunt! The (man) is 'parked' at the entrance of a shoe shop. He got like 10 pairs that day," commented Louis Zehmke.

"This guy is only barefoot as a begging strategy," wrote David Levy. "I've been seeing him around midtown for years. I've even witnessed someone buy him slippers in a freezing day which he promptly put in his shopping cart."