No spectators allowed in Times Square for NYE celebrations

Normally filled with thousands of people to ring in the new year, Times Square will be a much different place on New Year's Eve this year, with the NYPD making clear that no spectators should attempt to come to the area to watch the ball drop.

New York - If ever a year's end seemed like cause for celebration, 2020 might be it. Yet the coronavirus scourge that dominated the year is also looming over New Year's festivities and forcing officials worldwide to tone them down.

From New York's Times Square to Sydney Harbor, big public blowouts are being turned into TV-only shows and digital events. Fireworks displays have been canceled from the Las Vegas Strip to the Arc de Triomphe in Paris. Even private parties in some places are restricted.

The occasion stirs mixed feelings for people like Cesar Soltero, who was taking photos, and taking stock, in Times Square this week.

"I'm going to celebrate that I'm alive, but I'm not precisely too happy for this year," said Soltero, 36, an engineer visiting from Orlando, Florida, after forgoing his usual holiday trip to see family in Mexico.

The iconic ball drop in Times Square this year will be virtual, due to the coronavirus pandemic.

Simona Faidiga and Alessandro Nunziata strolled through Times Square with their Labrador retriever puppy, Maggie, who has given Faidiga a lift after she lost her tour guide job.

The Italian couple moved to Miami for new jobs in March, just as the pandemic froze tourism. He is working as a sales representative, but she is not back at work yet. And they're not ready to declare 2021 will be better, not wanting to jinx it.

Days ahead of the ball drop in Times Square, it clearly wasn't New Year's as usual at the Crossroads of the World. There was room to roam on sidewalks that would normally be all but impassable.

Vendors' carts and window displays at the area's struggling gift shops flaunted few 2021-themed souvenirs as workers set up a stage for a celebration that will unfold this year without the usual throngs of cheering, kissing revelers. Police will block off the area so spectators can't get a glimpse.

"It’s almost like a ‘Seinfeld’ episode," Police Commissioner Dermot Shea said, invoking the 1990s "show about nothing." "This is a ball drop about nothing, where you can’t see, so you may as well stay home."

The event's special guests will be first responders and essential workers. But they won't be joining the mayor on stage to lead the countdown. Instead, each guest will watch from a private, well-spaced area.

The night's performances — including disco diva Gloria Gaynor's singing of the apt-for-2020 anthem "I Will Survive" — will be aimed at TV audiences. 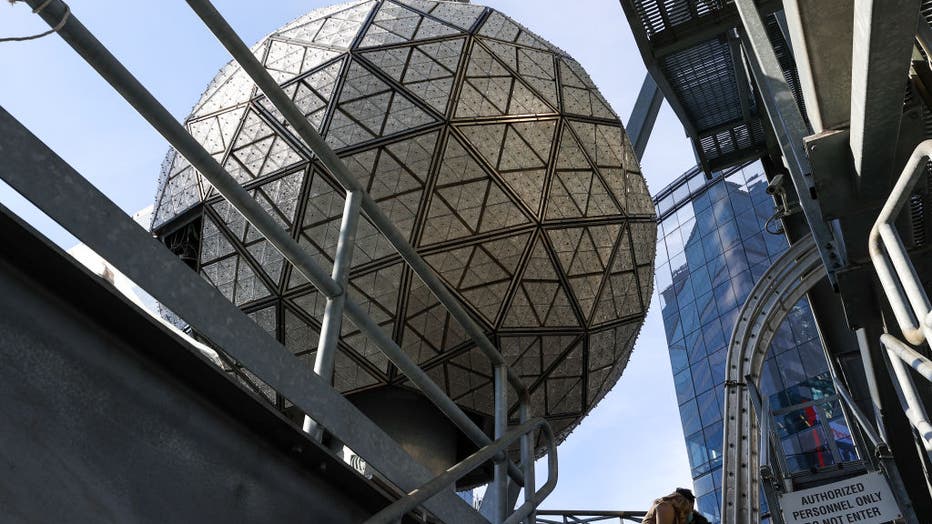 New Year's Eve will look different around the world after a year in which the virus killed an estimated 1.8 million people, including more than 330,000 in the U.S.

Germany banned the sale of fireworks, which residents usually set off in on the streets, and a pyrotechnics show at Berlin's Brandenburg Gate is off.

So, too, are the fireworks over the River Thames in locked-down London, where New Year's Eve also marks Britain’s final economic split from the European Union. However, Big Ben, which has been largely silent since 2017 while its clock tower is restored, will sound 12 bongs at midnight. 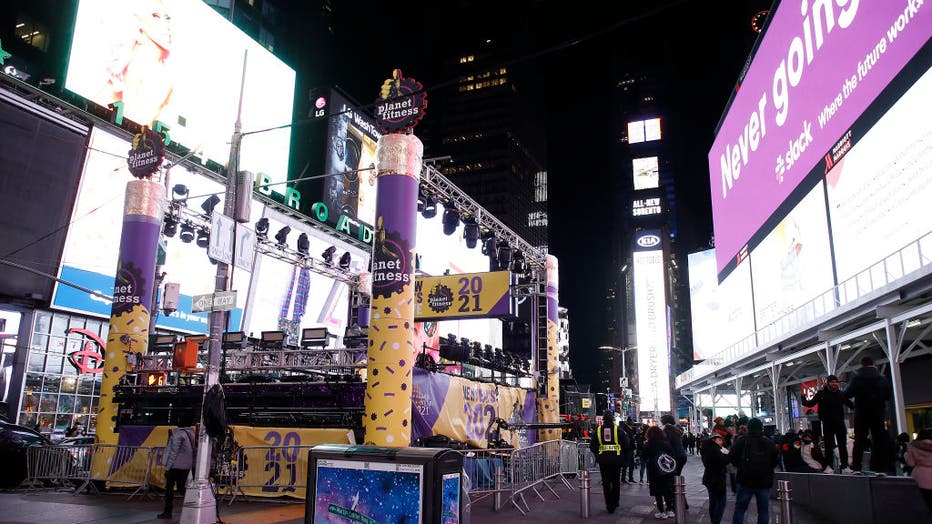 The Netherlands moved the national countdown from an Amsterdam park to a soccer stadium, where spectators won't be allowed in and pyrotechnics will be replaced with "electric fireworks."

In Rome, the fireworks are still on, but customary concerts in public plazas have been scrapped in favor of livestreamed performances and art installations. Pope Francis will skip his typical Dec. 31 visit to the Vatican’s life-sized Nativity scene in St. Peter’s Square and plans to deliver his New Year’s Day blessing indoors, to prevent crowds from gathering.

Rio de Janeiro nixed the fireworks, open-air concerts and rooftop parties that draw crowds of white-clad revelers in the Copacabana neighborhood, where only residents will be allowed in.

New Year’s Eve is one of the busiest days of the year at Paulo Roberto Senna’s Copacabana beach stand, but the 57-year-old said he was OK with the shutdown: "No money can buy our health!"

RELATED: New Year's Eve ball drop in Times Square will be virtual in 2020

"They tell us to stay home, but for those who don’t have money, where are we going to get the means to live?" asked Henrique, 39.

In Russia, New Year's Eve has been more widely celebrated than Christmas, which is marked on Jan. 7 by the country’s Orthodox Christian majority. Public events have been banned or restricted in many regions. But the country's so-called New Year's Eve capital, the city of Kaluga, is luring tourists with a week of festivities, despite pleas from residents to cancel. Officials in Kaluga, 150 kilometers (90 miles) southwest of Moscow, said virus precautions will be taken. 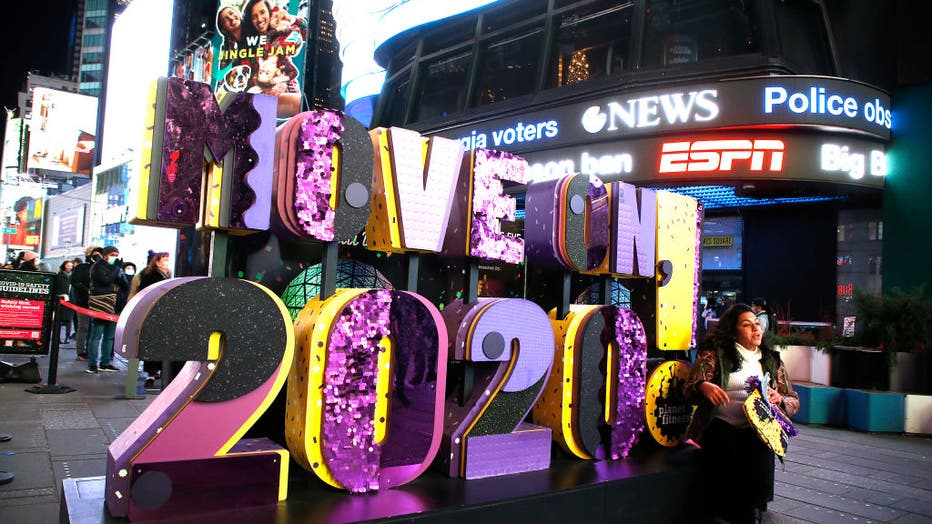 Poland has told residents not to circulate between 7 p.m. on Dec. 31 until 6 a.m. on Jan. 1. Turkey declared a four-day lockdown starting on New Year’s Eve, and President Recep Tayyip Erdogan warned that security forces will inspect hotels for illicit parties.

In the U.S., the Christmas morning bombing of the downtown tourist district in Nashville, Tennessee, led the city to cancel its plan to light fireworks and blow up a 2020 sign.

RELATED: Anthony Quinn Warner: What to know about the Nashville bombing suspect

"To say it would have been tone deaf would be an understatement," said Bruce Spyridon, president of the Nashville Convention & Visitors Corp.

South Africa President Cyril Ramaphosa suggested a new way of observing the holiday by lighting candles to honor COVID-19 victims and front-line workers and to hope for a healthy 2021.

Back in New York, yoga and stress-management instructor Allison Richard, 39, wrote up a few New Year's wishes on confetti that will be dropped at midnight in Times Square.

"Freedom," she wrote, and "contentment," "commitment," "connection," "prosperity" and "love."

Associated Press writers around the world contributed to this report.