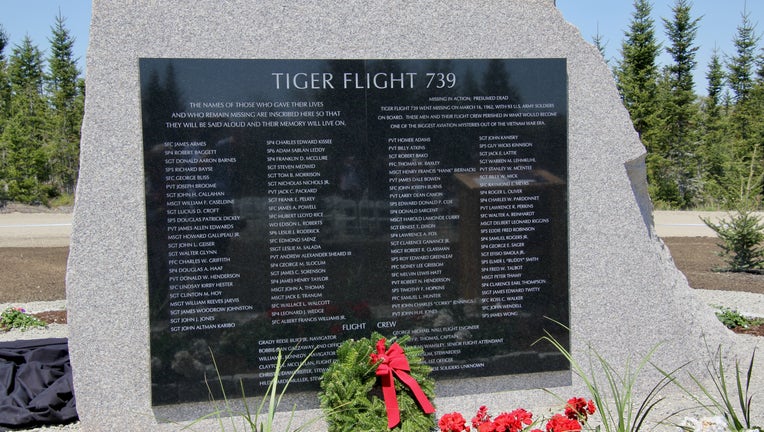 A new memorial for dozens of American soldiers and civilian crew members who died decades ago during a secret mission to Vietnam was unveiled Saturday.

The Flying Tiger Line Flight 739 Monument was dedicated during a special ceremony in Columbia Falls, Maine.

But the soldiers never made it. Their airplane disappeared between Guam and the Philippines, leaving behind no trace.

Because their deaths were not in the combat zone, their names were not allowed on the Vietnam Veterans Memorial in Washington. Ever since, loved ones have spent years seeking answers about the mission and acknowledgment of their deaths but have found neither.

But Saturday, family members of more than 20 of the fallen soldiers gathered for the dedication. This is the first time that many of these families have met one another to share their stories and experiences stemming from that fateful day.

The unveiling featured a reading of the names, a rifle salute, the playing of taps and the laying of a wreath.

The monument, made entirely of granite, is about 8 feet tall and bears the name of all who were aboard and presumed dead.

"It’s incredible," said Donna Ellis, of Haslett, Michigan, who was 5 when her father, Melvin Lewis Hatt, died in the crash. 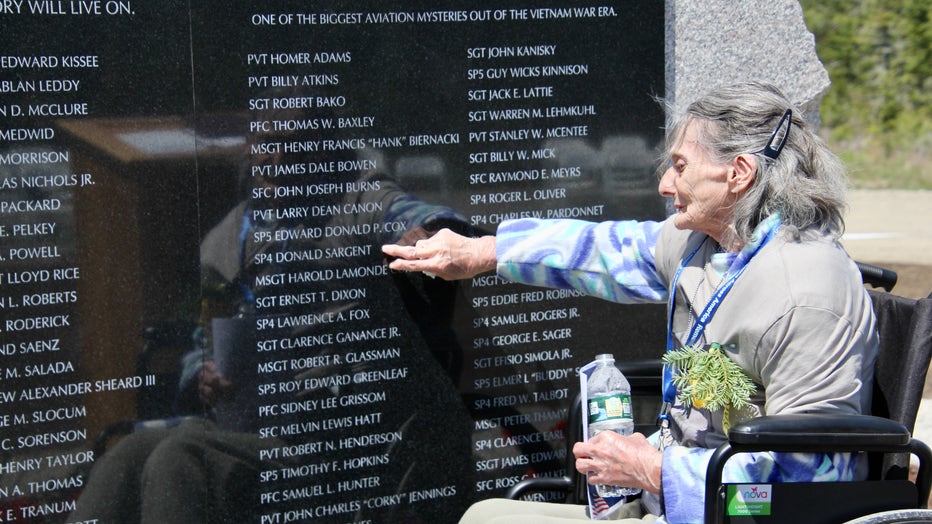 Josephine Gilpatrick, sister of Donald "Duckie" Sargent who was aboard Flying Tiger Line Flight 739, has waited 59 years to see her brother’s name in stone.

"These men and their flight crew perished in what would become one of the biggest aviation mysteries out of the Vietnam War era," part of the memorial inscription reads.

The mission, early in the Vietnam war, is shrouded in mystery.

Freedom of Information Act requests by loved ones have yielded redacted documents with little useful information about the clandestine mission.

"I do feel frustrated. It’s almost as if they never existed as soldiers. It’s almost like they don’t matter, that their deaths don’t matter," said Dianna Taylor Crumpler, of Olive Branch, Mississippi, whose brother, James Henry Taylor, an Army chaplain, died on the flight.

In 1962, soldiers from across the country assembled at Travis Air Force Base in California before boarding a propeller-powered Lockheed Super Constellation operated by the Flying Tiger Line, which chartered flights for the U.S. military.

The 93 U.S. soldiers, three South Vietnamese and 11 crew members aboard Flight 739 never made it to Saigon. It departed from California and made refueling stops in Hawaii, Wake Island and Guam before vanishing on the next leg of the flight to the Philippines on March 16.

Sailors on a tanker in the area made a report of witnessing a mid-air explosion, but no debris from the aircraft was recovered.

In Maine, the founder of Wreaths Across America, which places wreaths at Arlington National Cemetery and at veteran grave sites around the world, was moved by the story and decided to create a monument.

"When I first heard the story about this mission, I was shocked to learn that nothing has been done for these families," said Morrill Worcester. "I said that day, that we would do something to make sure these people are honored and remembered, and to hopefully give some closure to these families."

RELATED: May is Military Appreciation Month, and these war movies that salute soldiers are free to stream on Tubi

The monument is on the land where the brush is harvested each year to make the organization’s wreaths.

"This will be closure for a lot of families," said Susie Linale, of Omaha, Nebraska, part of a contingent of six family members, including her sister and brother. They wore buttons with an image of their father, Albert Francis Williams Jr., who died in the crash.