KEYSTONE, S.D. -- Neil Young made clear once again Friday that he doesn’t like it when one of his songs is used during a public appearance by President Donald Trump.

On Friday night, Young’s 1989 song, “Rockin’ in the Free World,” was played during the president’s Independence Day weekend event at Mount Rushmore in South Dakota.

“This is NOT ok with me,” the Canadian-born rocker, who became a U.S. citizen in January after living in Northern California for decades, wrote on social media.

In another message, Young wrote, “I stand in solidarity with the Lakota Sioux & this is NOT ok with me.”

Prior to President Trump’s arrival in South Dakota, Native American tribes planned to protest the event –long viewing Mount Rushmore as a desecration of land violently stolen from them and used to pay homage to leaders hostile to native people.

“Mount Rushmore is a symbol of white supremacy, of structural racism that’s still alive and well in society today,” Nick Tilsen, a member of the Oglala Lakota tribe and president of a local activist organization called NDN Collective, told The Associated Press. “It’s an injustice to actively steal Indigenous people’s land then carve the white faces of the conquerors who committed genocide.”

Young previously complained about the Trump campaign using the same song at least twice before -- in 2018 and 2015. 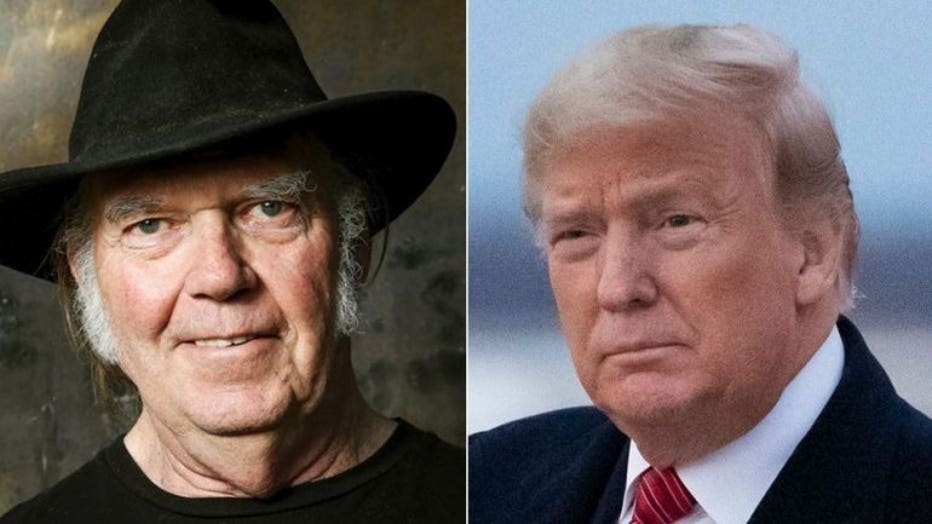 Neil Young doesn't like it when his songs are played at President Trump's events, but the president's campaign claims it has legal rights to use the music. (Courtesy: Fox Television Stations)

“DT does not have my permission to use the song ‘Rockin’ In The Free World’ at his appearances,” Young told Rolling Stone magazine in 2018. “Legally, he has the right to, however it goes against my wishes.”

After Young complained in 2015, then-Trump campaign manager Corey Lewandowski told Fox News the campaign had legally secured rights to use the Young song.

“Through a licensing agreement with ASCAP, Mr. Trump’s campaign paid for and obtained the legal right to use Neil Young’s recording of ‘Rockin' In The Free World,’” Lewandowski said at the time. “Nevertheless, there are plenty of other songs to choose from. Despite Neil’s differing political views, Mr. Trump likes him very much.”

Young, 74, claimed earlier this year that his application for U.S. citizenship had been delayed because of his “use of marijuana.”

After he was finally approved, he posted a photo of himself on social media, showing himself saluting next to an American flag – near a table marked “Democrats Register To Vote Here.”

“I’m happy to report I’m in!!” Young captioned the photo. “Vote your conscience.”

Fox News’ Tyler McCarthy and The Associated Press contributed to this story.