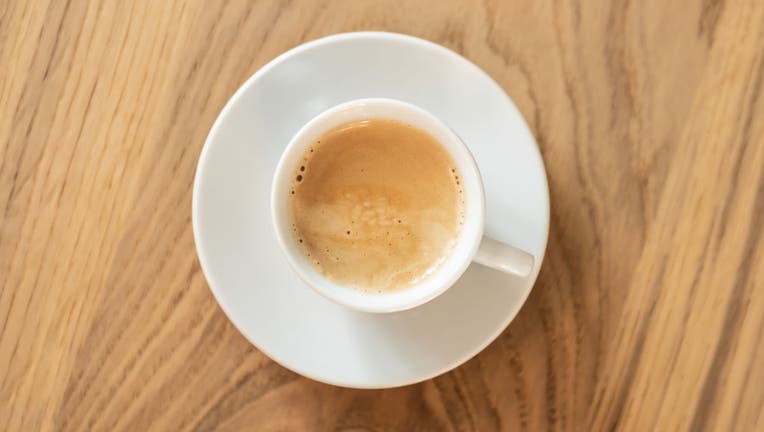 An espresso stands with a saucer on a wooden table. (Photo by Silas Stein/picture alliance via Getty Images)

Thursday, Sept. 29 is National Coffee Day with freebies and deals brewing at chains across the country.

Coffee consumption has soared in America, reaching a two-decade high this year as many take on post-COVID routines, according to polling this year by the National Coffee Association (NCA).

The group found that 66% of Americans drink coffee each day, more than any other beverage — including tap water. That figure was also up nearly 14% since January 2021, the NCA said.

Meanwhile, consumption of espresso-based beverages — typically prepared away from home — has increased by 30% since the start of the pandemic, according to the polling. And despite rising inflation this year, coffee giants like Starbucks have continued to see record demand.

Starbucks interim CEO Howard Schultz said earlier this month during an investor day that the company so far has been "immune … from any recognition whatsoever that there is a downturn in customer traffic, a downturn in terms of average ticket."

Schultz noted that Starbucks has seen a dramatic shift in its business with drive-thru now accounting for 50% of U.S. sales and mobile orders accounting for 25%. There has also been a surge in demand for cold beverages.

Starbucks, along with other big chains like Dunkin’ and Krispy Kreme, launched fall menus, including pumpkin spice offerings, back in August.

History of pumpkin spice in America

From pumpkin spice lattes to pumpkin-flavored doughnuts, it's clear the flavor is now an autumn staple of the American diet. (Photo credit: Anheuser-Busch)

Many chains are offering deals on Thursday to celebrate National Coffee Day 2022. A majority require customers to sign up for rewards programs to cash in on the deals.

Barnes & Noble: The book chain’s B&N Café is celebrating by offering a free tall hot or iced coffee on Thursday with the purchase of any baked item, according to Thrillist.

Biggby Coffee: The chain is offering a free 20-ounce hot or iced brewed coffee on Thursday at participating locations, sharing this coupon on Twitter.

Bulletproof Coffee: The company is offering 25% off coffee products and mix-ins , such as MCT oil and grass-fed ghee clarified butter.

Burger King: Members of Burger King Royal Perks can get a free small BK Café Iced Coffee when they spend $1 or more on the BK app or bk.com, according to CNET.

Dunkin’: Dunkin’ loyalty members can get a free medium hot or iced coffee with any purchase on Thursday.

Krispy Kreme: The chain is giving all guests a free hot or iced coffee on Thursday only.

Peet’s Coffee: Customers can get 20% off of products online using code COFFEEDAY through Oct. 2.

Tim Horton’s: On Thursday, the chain is offering a 25-cent medium, hot or iced coffee when customers order on the app.