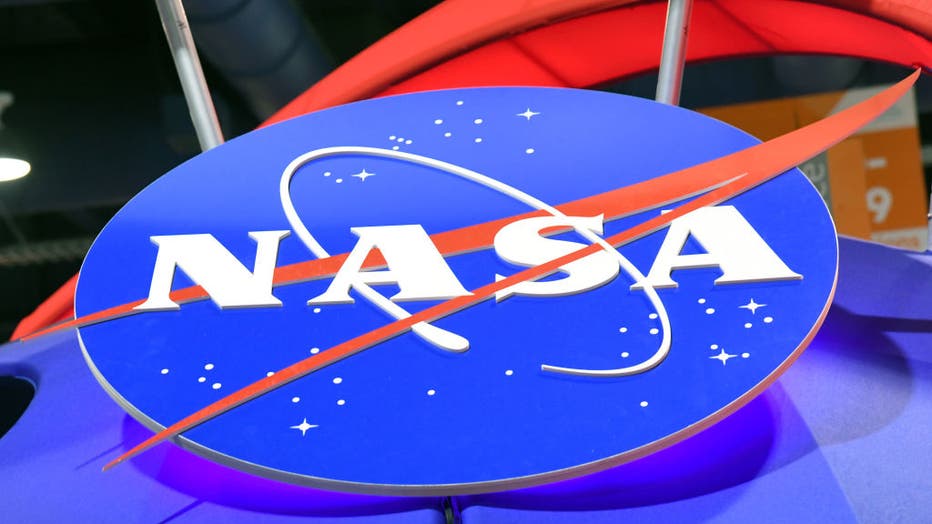 The NASA logo is displayed at the agency's booth during CES 2018 at the Las Vegas Convention Center on January 11, 2018 in Las Vegas, Nevada. The space agency said that an asteroid will make a close-approach to Earth on April 29. (Photo by Ethan Mill

Bridenstine will make the announcement at the virtual fall Lunar Surface Innovation Consortium meeting. The event is co-hosted by the Johns Hopkins Applied Physics Laboratory (APL) and Arizona State University.

On its website, NASA explains “a technology is considered at a tipping point if an investment in a demonstration will significantly mature the technology, increase the likelihood of infusion into a commercial space application, and bring the technology to market for both government and commercial applications.”

The agency's long-term goal is to send a manned mission to Mars in the 2030s.

In a statement, the space agency explained that through all of its activities, it generated more than $64.3 billion in total economic output during the fiscal year 2019 and supported more than 312,000 jobs nationwide. NASA also generated an estimated $7 billion in federal, state and local taxes.

The economic impact report commissioned by the space agency found that its Moon to Mars strategy generated over $14 billion in total economic output and supported more than 69,000 jobs nationwide during the fiscal year 2019.

The 2020 calendar year has been a busy one for NASA. In May, for example, NASA astronauts Doug Hurley and Bob Behnken launched on a historic mission to the International Space Station from Kennedy Space Center atop a SpaceX Falcon 9 rocket.

The mission marked the first time that astronauts have launched from American soil since the final Space Shuttle flight in 2011. Hurley and Behnken splashed down in the Gulf of Mexico in a SpaceX Crew Dragon spacecraft Aug. 2, ending their two-month trip to space.

Three more astronauts -- Mike Hopkins, Victor Glover and Shannon Walker -- are set to launch to the space station from NASA’s Kennedy Space Center aboard a SpaceX Crew Dragon spacecraft next month. They will be joined on the mission by Japanese Space Agency (JAXA) astronaut Soichi Noguchi.

Last week, NASA announced that the SpaceX Crew 1 launch had been pushed back from Oct. 31 to no sooner than early-to-mid November. The move, NASA explained in a blog post, will provide “additional time for SpaceX to complete hardware testing and data reviews as the company evaluates off-nominal behavior of Falcon 9 first stage engine gas generators observed during a recent non-NASA mission launch attempt.”

Future moon explorers will be bombarded with two to three times more radiation than astronauts aboard the International Space Station.

Astronomers have found a potential sign of life high in the atmosphere of neighboring Venus.