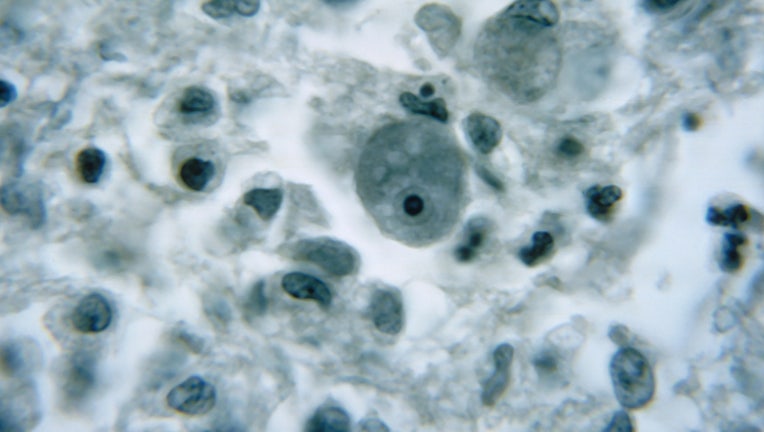 This photomicrograph of a brain tissue specimen depicts the cytoarchitectural changes associated with a free-living amebic infection, which may have been caused by a Naegleria fowleri (Photo by Smith Collection/Gado/Getty Images).

A Nebraska child died this week from an infection caused by a brain-eating amoeba typically found in warm freshwater rivers and lakes.

According to the Douglas County Health Department, the child was infected with primary amebic meningoencephalitis, a disease caused by the brain-eating ameba Naegleria Fowleri, after swimming in the Elkhorn River Sunday.

Naegleria Fowleri enters the body through the nose, usually while swimming or diving. You can reduce your risk by plugging your nose, keeping your head above water and avoiding freshwater sources in late summer when water temperatures are at their highest.

"We can only imagine the devastation this family must be feeling, and our deepest condolences are with them. We can honor the memory of this child by becoming educated about the risk and then taking steps to prevent infection," Health Director Dr. Lindsay Huse said in a news release.

What is Naegleria Fowleri?

Naegleria Fowleri is a single-celled amoeba that lives in warm freshwater and soil. When it enters the body through the nose, it causes primary amebic meningoencephalitis, or PAM.

The amoeba cannot enter your body by drinking contaminated water, and it doesn’t spread from person to person.

PAM is rare but deadly, health officials said. Since 1965, 154 people have been infected in the United States. Of those, 150, or 97%, have died, according to the U.S. Centers for Disease Control and Prevention.

Testing for it is futile, officials said, because it’s "present in so many places."

Symptoms start to appear between one and 12 days after infection, according to the CDC. They can include:

On average, people infected with PAM die within five days of diagnosis.

The CDC says two people with recent Naegleria infections survived after being treated with a new drug that was given along with other drugs to manage brain swelling.