The President of European Commission and other world leaders convenes a global pledging event, 'Stand up for Ukraine' in wake of Russian invasion.

KYIV, Ukraine - Civilian evacuations moved forward in patches of battle-scarred eastern Ukraine a day after a missile strike killed at least 52 people at a train station where thousands were waiting to leave the increasingly vulnerable region before an expected Russian onslaught. 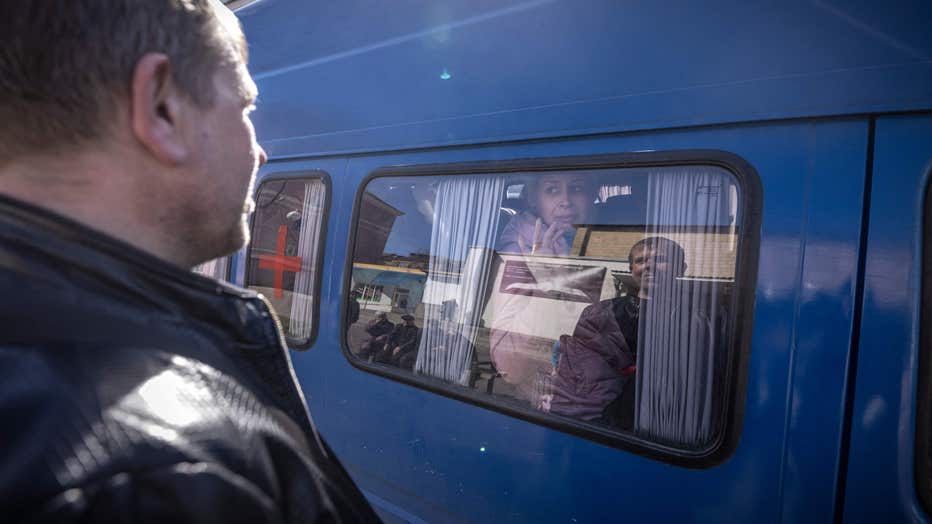 Ukrainian President Volodymyr Zelenskyy demanded a tough global response to Friday's train station attack in Kramatorsk, calling it the latest sign of war crimes by Russian forces and hoping to prod Western backers to step up their response to help his country defend itself.

"All world efforts will be directed to establish every minute of who did what, who gave what orders, where the missile came from, who transported it, who gave the command and how this strike was agreed," Zelenskyy said in his nightly video address, his voice rising in anger.

Russia denied it was responsible and accused Ukraine’s military of firing on the station to try to turn blame for civilian slayings on Moscow. A Russian Defense Ministry spokesman detailed the missile’s trajectory and Ukrainian troop positions to bolster the argument. Western experts and Ukrainian authorities insisted that Russia launched the missile. 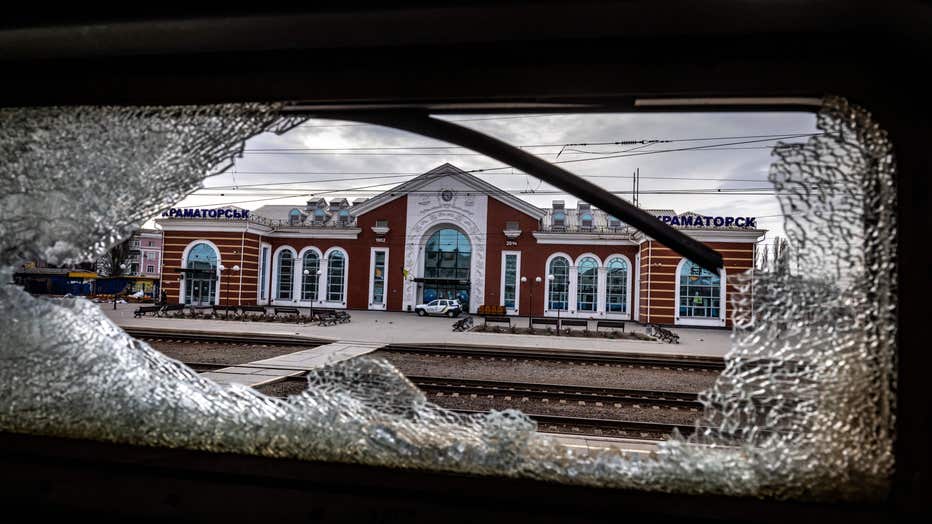 Ukraine’s state railway company said in a statement that residents of the country’s contested Donbas region, where Russia has refocused its forces after failing to take over the Ukrainian capital, Kyiv, could flee through other train stations on Saturday.

"The railways do not stop the task of taking everyone to safety," the statement on the messaging app Telegram said.

Deputy Prime Minister Iryna Vereshchuk said 10 evacuation corridors were planned for Saturday in hopes of allowing residents to leave war zones in the eastern regions of Donetsk and Luhansk, which comprise the Donbas, as well as neighboring Zaporizhzhia.

Ukrainian authorities have called on civilians to get out ahead of an imminent, stepped-up offensive by Russian forces. Britain’s Defense Ministry reported Saturday that Russian naval forces were launching cruise missiles to support the ground operations in eastern Ukraine, including in the port cities of Mykolaiv and Mariupol.

Photos taken after Friday’s missile strike showed corpses covered with tarpaulins, and the remnants of a rocket painted with the words "For the children" in Russian. The phrasing seemed to suggest the missile was sent to avenge the loss or subjugation of children, although its exact meaning remained unclear. 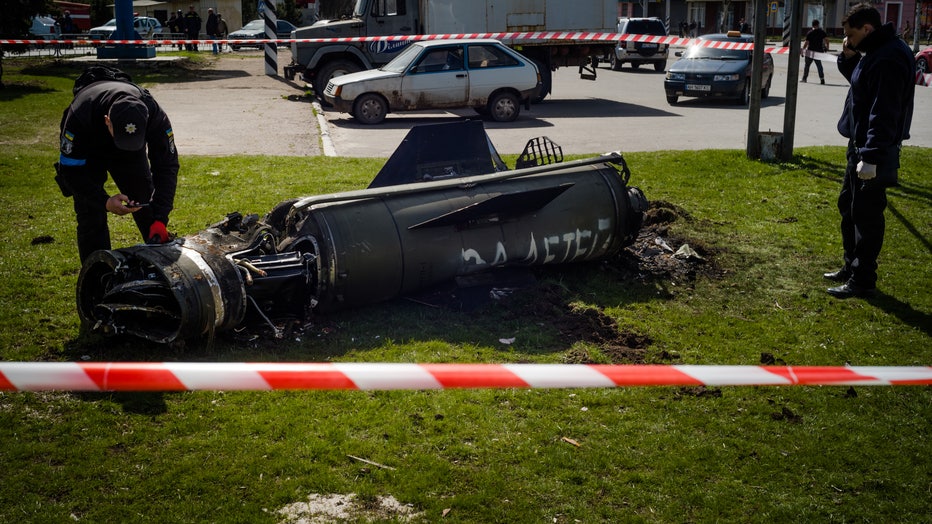 KRAMATORSK, UKRAINE - APRIL 8: A partly damaged rocket with sign in Russian "for the children" lays in front of the train station where dozens were injured and 52 died, including four children, in a Russian rocket attack. (Photo by Wojciech Grzedzins

The attack came as Ukrainian authorities worked to identify victims and document possible war crimes by Russian soldiers in northern Ukraine. The mayor of Bucha, a town near Kyiv where graphic evidence of civilian slayings emerged after the Russians withdrew, said search teams were still finding the bodies of people shot at close range in yards, parks and city squares.

On Friday, workers unearthed the bodies of 67 people from a mass grave near a church, according to Ukraine's prosecutor general. Russia has falsely claimed that the scenes in Bucha were staged.

After failing to occupy Kyiv in the face of stiff resistance, Russian forces have set their sights on eastern Ukraine. Many of the civilians now trying to evacuate are accustomed to living in or near a war zone because Moscow-backed rebels have been fighting Ukrainian forces since 2014 in the Donbas.

The same week Russia invaded Ukraine, Russian President Vladimir Putin recognized the independence of areas controlled by the separatists and said he planned to send troops in to protect residents of the mostly Russian-speaking, industrial region.

Although the Kramatorsk train station is in Ukrainian government-controlled territory in the Donbas, the separatists, who work closely with Russian troops, blamed Ukraine for the attack.

Western experts, however, dismissed Kremlin spokesperson Dmitry Peskov's assertion that Russian forces "do not use" Tochka-U missiles, the type that hit the station. A Western official, speaking on condition of anonymity to discuss intelligence, said Russian forces have used the missile — and that given the strike’s location and impact, it was likely Russia’s.

Ukrainian authorities and Western officials have repeatedly accused Russian forces of committing atrocities in the war that began with Russia's Feb. 24 invasion. A total of 176 children have been killed in Ukraine since the start of the war, while 324 more have been wounded, the country’s Prosecutor General’s Office said Saturday.

Ukrainian authorities have warned they expect to find more mass killings once they reach the southern port city of Mariupol, which is also in the Donbas and has been subjected to a monthlong blockade and intense fighting. 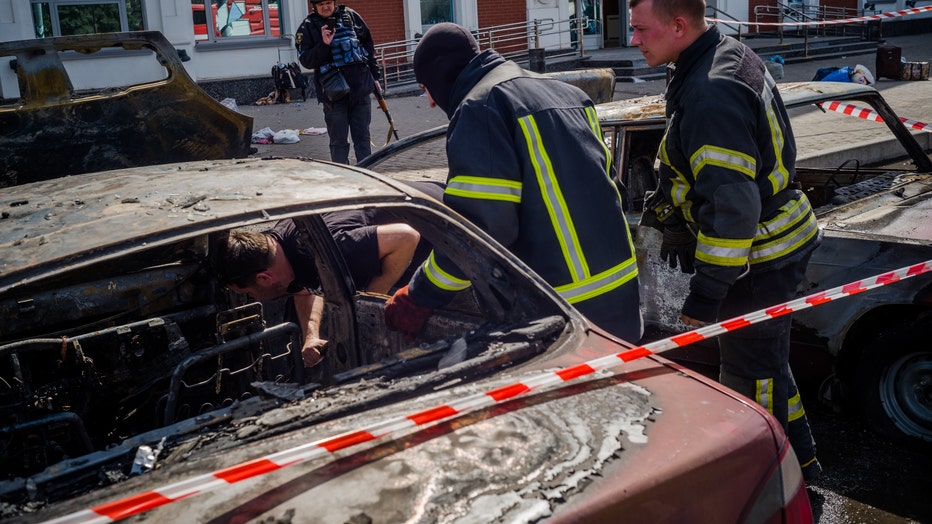 KRAMATORSK, UKRAINE - APRIL 8: Dozens were injured and at least thirty-nine dead, including four children, in a Russian rocket attack on a train station in Kramatorsk, Ukraine, where evacuation trains were departing on April 8, 2022. (Photo by Wojcie

As journalists who had been largely absent from the city began to trickle back in, new images emerged of the devastation from an airstrike on a theater last month that reportedly killed hundreds of civilians seeking shelter.

Military analysts had predicted for weeks that Russia would succeed in taking Mariupol but said Ukrainian defenders were still putting up a fight. The city's location on the Sea of Azov is critical to establishing a land bridge from the Crimean Peninula, which Russia seized from Ukraine eight years ago.

Some of the grisliest evidence of atrocities so far has been found in Bucha and other towns around Kyiv, from which Russian troops pulled back in recent days. An international organization formed to identify the dead and missing from the 1990s Balkans conflicts is sending a team of forensics experts to Ukraine to help put names to bodies.

In an excerpted interview with American broadcaster CBS’ "60 Minutes" that aired Friday, Zelenskyy cited communications intercepted by the Ukrainian security service as evidence of Russian war crimes. The authenticity of the recordings could not be independently verified.

"There are (Russian) soldiers talking with their parents about what they stole and who they abducted. There are recordings of (Russian) prisoners of war who admitted to killing people," he said. "There are pilots in prison who had maps with civilian targets to bomb. There are also investigations being conducted based on the remains of the dead."

The deaths of civilians at the train station brought renewed expressions of outrage from Western leaders and pledges that Russia would face further reprisals for its actions in Ukrane. On Saturday, Russia’s Defense Ministry tried to counter the dominant international narrative by again raising the specter Ukraine planting false flags and misinformation. 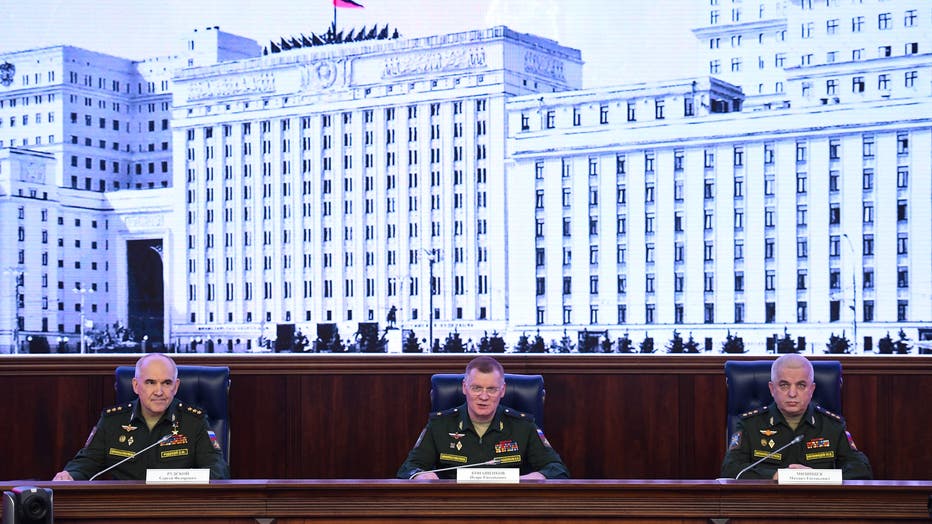 A ministry spokesman, Major Gen. Igor Konashenkov, alleged Ukraine’s security services were preparing a "cynical staged" media operation in Irpin, another town near Kyiv. Konashenkov said the plan was to show -- falsely, he said -- more civilian casualties at the hands of the Russians and to stage the slaying of a fake Russian intelligence team that intended to kill witnesses. The claims could not be independently verified.

A senior U.S. defense official who spoke on condition of anonymity to discuss internal military assessments said Friday that the Pentagon believes Russia has lost between 15% and 20% of its combat power overall since the war began.

While some combat units are withdrawing to be resupplied in Russia, Moscow has added thousands of troops around Ukraine’s second-largest city, Kharkiv, in the country's east, the official said.

Ukrainian officials have almost daily pleaded with Western powers to send more arms, and to further punish Russia with sanctions, including the exclusion of Russian banks from the global financial system and a total European Union embargo on Russian gas and oil. 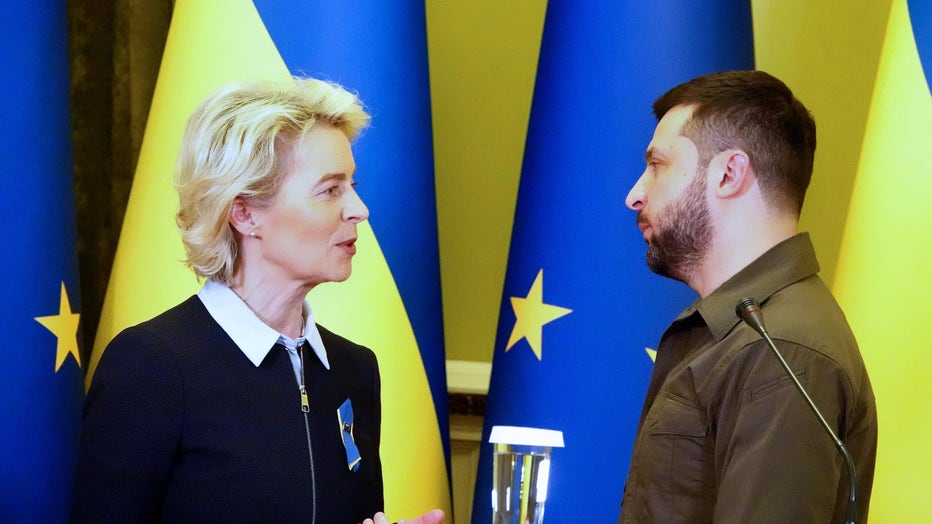 Austrian Chancellor Karl Nehammer on Saturday was the latest in a parade of top leaders from the European Union to visit Zelenskyy in Kyiv. The head of the EU's executive arm, European Commission President Ursula von der Leyen, gave the Ukrainian president a questionnaire Friday that could lead to Ukraine’s membership in the 27-member-country bloc.