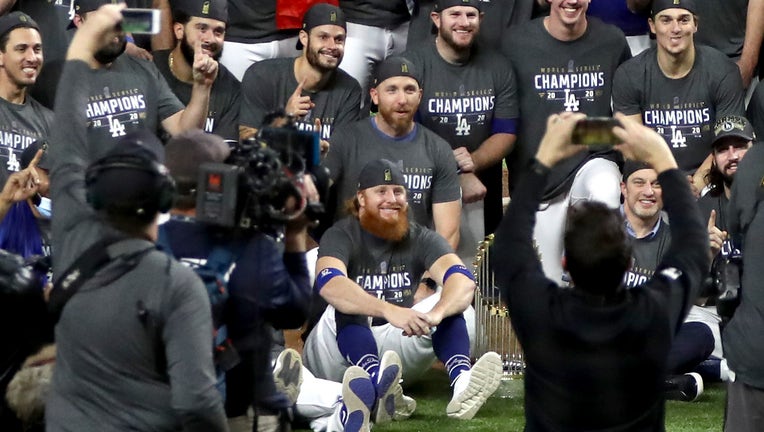 ARLINGTON, TEXAS - OCTOBER 27: Justin Turner #10 and the Los Angeles Dodgers pose for a photo after defeating the Tampa Bay Rays 3-1 in Game Six to win the 2020 MLB World Series at Globe Life Field on October 27, 2020 in Arlington, Texas. (Photo by R

LOS ANGELES - Major League Baseball on Friday announced that it has completed its investigation into the actions of Dodgers' third baseman Justin Turner following the team's victory in game six of the World Series, in which Turner "disregarded" COVID-19 protocols by celebrating with his team, despite finding out he had tested positive for the coronavirus.

Turner will not face punishment from the league, which conceded that a variety of errors and miscommunication contributed to the situation.

In a statement released Friday, Turner took full responsibility for his actions and explained that he was "blindsided with the news" that he had tested positive for COVID-19.

"I will not make excuses for my conduct, but I will describe my state of mind. Winning the World Series was my lifelong dream and the culmination of everything I worked for in my career. After waiting in the isolation room while my teammates celebrated on the field, I asked whether I was permitted to return to the field with my wife in order to take a photograph. I assumed by that point that few people were left on the field. I was under the impression that team officials did not object to my returning to the field for a picture with my wife," explained Turner. "However, what was intended to be a photo capturing the two of us turned into several greetings and photos where I briefly and unwisely removed my mask. In hindsight, I should have waited until the field was clear of others to take that photo with my wife."

"I sincerely apologize to everyone on the field for failing to appreciate the risks of returning to the field," wrote Turner. "I have spoken with almost every teammate, coach, and staff member, and my intentions were never to make anyone uncomfortable or put anyone at further risk."

MLB Commissioner Robert Manfred Jr. also released a statement, saying in part, "Staging a baseball season during the COVID 19 pandemic is an incredibly difficult undertaking and it required significant sacrifices and an enormous amount of work by players, club staff and the Commissioner's Office. We all have made mistakes as we navigated these unprecedented challenges and have tried to learn from those mistakes so they are not repeated. With this in mind. I am closing this matter by applauding Justin for accepting responsibility, apologizing and making a commitment to set a positive example going forward."

Turner was pulled from the game prior to the eighth inning, and according to a written statement from MLB, the Dodgers third baseman was told to isolate from others.

Despite being instructed to isolate, Turner joined the championship celebration on the field at Globe Life Field in Arlington, Texas, including holding the Commissioner's Trophy, kissing his wife Kourtney and sitting without a mask next to manager Dave Roberts, a cancer survivor, for a team picture.

According to Manfred, the investigation found that Turner's teammates actively encouraged him to leave the isolation room and return to the field for a photograph.

"Many teammates felt they had already been exposed to Mr. Turner and were prepared to tolerate the additional risk," Manfred's statement reads.

The commissioner also said that Truner believed he received permission from at least one of the Dodgers' employees to return to the field for the photograph but added that that may have been a result of miscommunication.

Lastly, Manfred states that "during the somewhat chaotic situation on the field. Mr. Turner was incorrectly told by an unidentified person that other players had tested positive creating the impression in Mr. Turner's mind that he was being singled out for isolation."

"Mr. Turner has publicly recognized that his conduct was wrong and has expressed remorse for that conduct. I have spoken to him personally and I know that he is extraordinarily upset by the incident. By all accounts, Justin is a leader in the clubhouse, a contributor to his community and a responsible person who was instrumental in the Dodgers diligently following the health protocols all season long," Manfred continued.

That sentiment was echoed by Dodger President/CEO Stan Kasten, who called the post-game events "regrettable," but hailed Turner's leadership on the team.

"Through much hard work and sacrifice, the Dodgers were successful at preventing COVID-19 infections throughout a very difficult 2020 season," Kasten said. "No player was more instrumental in allowing the Dodgers to overcome the adversity created by the pandemic than Justin Turner, as he set an example for his teammates and advocated for enhanced safety measures that went above and beyond league requirements. Justin's leadership played a large part in helping the Dodgers safely complete the entire season, which culminated in a World Championship."