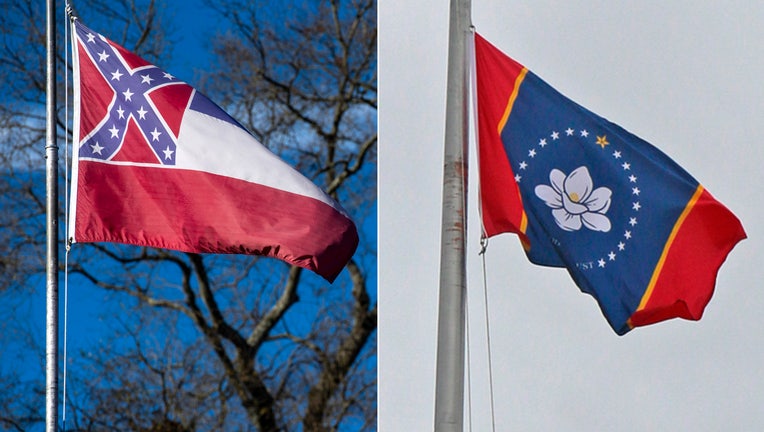 Mississippi on Tuesday voted to replace its state flag, which had been the last one in the U.S. to include an image of the Confederate-themed battle flag.

The new state flag will feature the magnolia flower and the phrase “In God We Trust." The flag was selected by a state commission in September to be put on the November ballot.

"This will be the new state flag of Mississippi. Voters overwhelmingly approved it. This is a great day for the state as we move forward from a divisive emblem that now rests in the past," tweeted resident Sam Hall.

The magnolia is in the center of the flag with 20 stars encircling it (representing Mississippi as the 20th state) with a dark blue background and red bars on each side.

“What I wanted to do was show every Mississippian that there’s a compromise out there, and we are the magnolia state,” Rocky Vaughan, the graphic designer who created the flag’s overall design, said. “If it’s appealing to the eyes, it will be accepted.”

First adopted in 1894, the previous flag featured blue and white stripes and a Confederate emblem in the corner. The banner was retired months ago as part of the national protests against racial injustice.

A majority of voters chose to keep the flag in a 2001 election, but several cities and counties and all of Mississippi’s public universities had stopped flying it because of the Confederate symbol.

“That old flag to me represented a lot of rebelism, you know, the good old boys,” said Taderell Lamont Roberts, 48, of Picayune. “It never bothered me. ... But is time for a different flag so our new generation can see that all that is in the past, and they don’t have to deal with that. We were brought up to just live with it. But I’m glad that now it’s time for a change.”

The magnolia was chosen by a state commission out of nearly 3,000 entries for the new flag’s design, including the “Great River Flag,” which featured a shield, reports said.

RELATED: 17 inmates baptized in Mississippi jail: 'We hope this is a new start'

A law retiring the old flag specified the new design couldn't include the Confederate battle flag and must have the phrase, “In God We Trust.”

Requiring the religious phrase helped persuade some conservative legislators to let go of the old flag.

Fox News' Brie Stimson and the Associated Press contributed to this report.