The police officer who shot and killed 20-year-old Daunte Wright in Brooklyn Center Sunday afternoon was identified as Kim Potter by the Minnesota BCA Monday night. In a release, the BCA said Potter has been with the Brooklyn Center Police Department for 26 years. She has been placed under standard administrative leave.

The police shooting of Daunte Wright, a 20-year-old Black man who died Sunday in a Minneapolis suburb, sparked protests Monday night across many U.S. cities — including Portland where a demonstration turned into a riot. Some in the crowd threw rocks and other projectiles at officers.

Wright was shot and killed during a traffic stop in Brooklyn Center, a city of about 30,000 people on the northwest border of Minneapolis. At least 40 people were arrested during the second night of protests outside the Brooklyn Center Police Department, for reasons ranging from curfew violations to rioting.

The Minneapolis area was already on edge because of the trial of the first of four police officers charged in George Floyd’s death.

In Portland, police said at least 200 people gathered around 8:30 p.m. at the Penumbra Kelly Building, which houses an office for the Multnomah County Sheriff and Portland police. 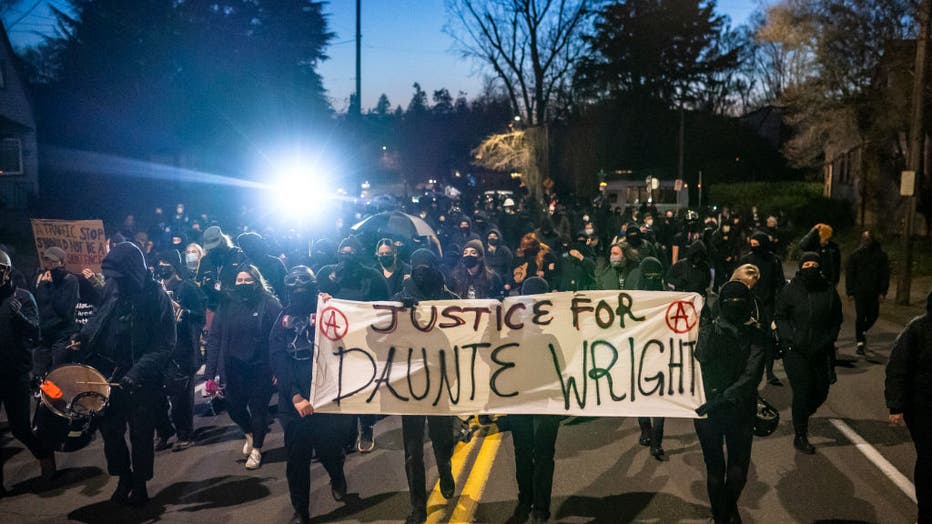 PORTLAND, OR - APRIL 12: Activists march towards the Multnomah County Sheriff's office during a protest against the killing of Daunte Wright on April 12, 2021 in Portland, Oregon. (Photo by Nathan Howard/Getty Images)

The evening began as a vigil for Wright, but the crowd became more aggressive as the night progressed and began throwing glass bottles, frozen water bottles, rocks and fireworks toward officers and the building. Some in the crowd also attempted to light a dumpster on fire.

Police said they issued verbal warnings to the crowd but around 10:30 p.m. police declared the gathering as a riot and bull-rushed protesters, knocking them to the ground and macing them, according to local news outlets.

After officers pushed the crowd back, police said they "purposely disengaged" from the crowd "to allow people to begin acting lawfully and peacefully."

Officials released the body camera video Monday of Sunday's deadly police shooting of Daunte Wright during a traffic stop in Brooklyn Center, Minnesota. Brooklyn Center Police Chief Tim Gannon said it was an accidental discharge, that the officer who shot Wright had intended to reach for her taser, but discharged her handgun instead.

The body camera video of the incident was released during a news conference, in which the officer, identified as a 26-year veteran with the department, is heard shouting "taser, taser!" but was holding her handgun instead. She then fired a single shot.

Gannon called it an "accidental discharge."

RELATED: Daunte Wright shooting: How does an officer use a gun instead of a Taser?

In Washington, D.C., hundreds of people marched through the nation’s capital Monday in the wake of the shooting, as well as incidents closer to home. Last week, an off-duty Pentagon police officer was arrested in connection with a double murder, and an incident in which an Army lieutenant was stopped by police and pepper-sprayed in Windsor, Va. has gone viral.

Protesters also marched across the Manhattan Bridge in New York in solidarity with Wright. Video posted on Twitter shows demonstrators walking across the upper level of the bridge.

In Los Angeles, community leaders and law enforcement chiefs urged residents who planned to protest in the wake of tensions in Minnesota to do it peacefully.

The incident in Brooklyn Center started shortly before 2 p.m. local time Sunday when officers stopped Wright’s vehicle for expired tags, according to FOX 9 Minneapolis. After learning the driver had an outstanding warrant, police said they tried to arrest him but he got back into his vehicle.

At that point, the officer fired her gun, striking him, police said. The vehicle traveled several blocks before crashing into another car. Wright was pronounced dead at the scene.

Wright’s family offered a different account, with his mother Katie Wright telling the Associated Press that her son was shot before getting back into the car.

A female passenger sustained non-life-threatening injuries during the crash, authorities said. Katie Wright said that the passenger was her son’s girlfriend.

The Minnesota Bureau of Criminal Apprehension is now investigating the deadly shooting.

Court records show Wright was being sought after failing to appear in court on charges that he fled from officers and possessed a gun without a permit during an encounter with Minneapolis police in June. In that case, a statement of probable cause said police got a call about a man waving a gun who was later identified as Wright.

Speaking before the unrest, Katie Wright urged protesters to stay peaceful and focused on the loss of her son.

"All the violence, if it keeps going, it’s only going to be about the violence. We need it to be about why my son got shot for no reason," she said to a crowd near the shooting scene. "We need to make sure it’s about him and not about smashing police cars because that’s not going to bring my son back."