MINNEAPOLIS, Minn.  — Cheering protesters torched a Minneapolis police station that the department was forced to abandon as three days of violent protests spread to nearby St. Paul and angry demonstrations flared across the U.S over the death of George Floyd, a handcuffed black man who pleaded for air as a white police officer kneeled on his neck.

A police spokesman confirmed late Thursday that staff had evacuated the 3rd Precinct station, the focus of many of the protests, “in the interest of the safety of our personnel" shortly after 10 p.m. Livestream video showed the protesters entering the building, where fire alarms blared and sprinklers ran as blazes were set.

Protesters could be seen setting fire to a Minneapolis Police Department jacket.

Late Thursday, President Donald Trump blasted the “total lack of leadership” in Minneapolis. “Just spoke to Governor Tim Walz and told him that the Military is with him all the way. Any difficulty and we will assume control but, when the looting starts, the shooting starts,” he said on Twitter.

A visibly tired and frustrated Minneapolis Mayor Jacob Frey made his first public appearance of the night at City Hall near 2 a.m. Friday and took responsibility for evacuating the precinct, saying it had become too dangerous for officers there. As Frey continued, a reporter cut across loudly with a question: “What's the plan here?”

“With regard to?” Frey responded. Then he added: “There is a lot of pain and anger right now in our city. I understand that ... What we have seen over the past several hours and past couple of nights here in terms of looting is unacceptable.”

He defended the city's lack of engagement with looters — only a handful of arrests across the first two nights of violence — and said, “We are doing absolutely everything that we can to keep the peace.” He said Guard members were being stationed in locations to help stem looting, including banks, grocery stores and pharmacies. 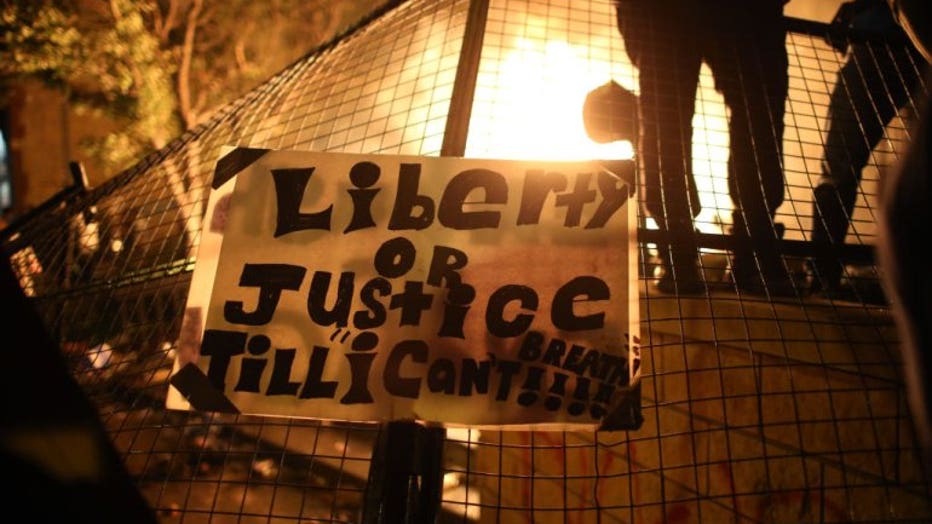 MINNEAPOLIS, MINNESOTA - MAY 28: Protesters gather outside the 3rd precinct police building while it burns on May 28, 2020 in Minneapolis, Minnesota. (Photo by Scott Olson/Getty Images)

Protests first erupted Tuesday, a day after Floyd's death in a confrontation with police captured on widely seen citizen video. On the video, Floyd can be seen pleading as Officer Derek Chauvin presses his knee against him. As minutes pass, Floyd slowly stops talking and moving. The 3rd Precinct covers the portion of south Minneapolis where Floyd was arrested.

Minnesota Gov. Tim Walz earlier Thursday activated the National Guard at the Minneapolis mayor’s request, but it wasn’t immediately clear when and where the Guard was being deployed, and none could be seen during protests in Minneapolis or St. Paul. The Guard tweeted minutes after the precinct burned that it had activated more than 500 soldiers across the metro area.

The Guard said a “key objective” was to make sure fire departments could respond to calls, and said in a follow-up tweet it was “here with the Minneapolis Fire Department” to assist. But no move was made to put out the 3rd Precinct fire. Assistant Fire Chief Bryan Tyner said fire crews could not safely respond to fires at the precinct station and some surrounding buildings. 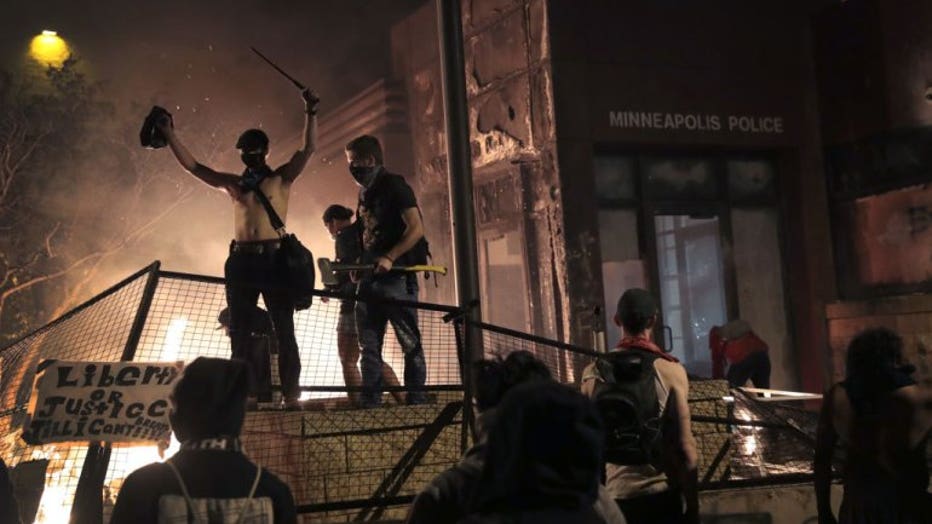 MINNEAPOLIS, MINNESOTA - MAY 28: Protesters gather in front of the 3rd precinct police building while it burns on May 28, 2020 in Minneapolis, Minnesota. (Photo by Scott Olson/Getty Images)

Earlier Thursday, dozens of businesses across the Twin Cities boarded up their windows and doors in an effort to prevent looting, with Minneapolis-based Target announcing it was temporarily closing two dozen area stores. Minneapolis shut down nearly its entire light-rail system and all bus service through Sunday out of safety concerns.

In St. Paul, clouds of smoke hung in the air as police armed with batons and wearing gas masks and body armor kept a watchful eye on protesters along one of the city’s main commercial corridors, where firefighters also sprayed water onto a series of small fires. At one point, officers stood in line in front of a Target, trying to keep out looters, who were also smashing windows of other businesses.

Hundreds of demonstrators returned Thursday to the Minneapolis neighborhood at the center of the violence, where the nighttime scene veered between an angry protest and a street party. At one point, a band playing in a parking lot across from the 3rd Precinct broke into a punk version of Bob Marley's “Redemption Song." Nearby, demonstrators carried clothing mannequins from a looted Target and threw them onto a burning car. Later, a building fire erupted nearby.

But elsewhere in Minneapolis, thousands of peaceful demonstrators marched through the streets calling for justice.

Floyd's death has deeply shaken Minneapolis and sparked protests in cities across the U.S. Local leaders have repeatedly urged demonstrators to avoid violence.

“Please stay home. Please do not come here to protest. Please keep the focus on George Floyd, on advancing our movement and on preventing this from ever happening again,” tweeted St. Paul Mayor Melvin Carter, who is black.

Erika Atson, 20, was among thousands of people who gathered outside government offices in downtown Minneapolis, where organizers had called for a peaceful protest. Many protesters wore masks because of the coronavirus pandemic, but there were few attempts at social distancing.

Atson, who is black, described seeing her 14- and 11-year-old brothers tackled by Minneapolis police years ago because officers mistakenly presumed the boys had guns. She said she had been at “every single protest” since Floyd’s death and worried about raising children who could be vulnerable in police encounters.

The group marched peacefully for three hours before another confrontation with police broke out, though details were scarce.

After calling in the Guard, Walz urged widespread changes in the wake of Floyd's death.

"It is time to rebuild. Rebuild the city, rebuild our justice system and rebuild the relationship between law enforcement and those they’re charged to protect,” Walz said.

Much of the Minneapolis violence occurred in the Longfellow neighborhood, where protesters converged on the precinct station of the police who arrested Floyd. In a strip mall across the street from the 3rd Precinct station, the windows in nearly every business had been smashed, from the large Target department store at one end to the Planet Fitness gym at the other. Only the 24-hour laundromat appeared to have escaped unscathed.

“WHY US?” demanded a large expanse of red graffiti scrawled on the wall of the Target. A Wendy’s restaurant across the street was charred almost beyond recognition.

Among the casualties of the overnight fires: a six-story building under construction that was to provide nearly 200 apartments of affordable housing.

“We’re burning our own neighborhood,” said a distraught Deona Brown, a 24-year-old woman standing with a friend outside the precinct station, where a small group of protesters were shouting at a dozen or so stone-faced police officers in riot gear. “This is where we live, where we shop, and they destroyed it.” No officers could be seen beyond the station.

“What that cop did was wrong, but I’m scared now,” Brown said.

Others in the crowd saw something different in the wreckage.

Protesters destroyed property "because the system is broken,” said a young man who identified himself only by his nickname, Cash, and who said he had been in the streets during the violence. He dismissed the idea that the destruction would hurt residents of the largely black neighborhood.

“They’re making money off of us,” he said angrily of the owners of the destroyed stores. He laughed when asked if he had joined in the looting or violence. “I didn’t break anything.”

The protests that began Wednesday night and extended into Thursday were more violent than Tuesday's, which included skirmishes between officers and protesters but no widespread property damage.

Protests have also spread to other U.S. cities. In New York City, protesters defied New York’s coronavirus prohibition on public gatherings Thursday, clashing with police, while demonstrators blocked traffic in downtown Denver and downtown Columbus. A day earlier, demonstrators had taken to the streets in Los Angeles and Memphis.

In Louisville, Kentucky, police confirmed that at least seven people had been shot Thursday night as protesters demanded justice for Breonna Taylor, a black woman who was fatally shot by police in her home in March.

Amid the violence in Minneapolis, a man was found fatally shot Wednesday night near a pawn shop, possibly by the owner, authorities said.

Fire crews responded to about 30 intentionally set blazes on Wednesday, and multiple fire trucks were damaged by rocks and other projectiles, the fire department said. No one was hurt by the blazes.

The city on Thursday released a transcript of the 911 call that brought police to the grocery store where Floyd was arrested. The caller described someone paying with a counterfeit bill, with workers rushing outside to find the man sitting on a van. The caller described the man as “awfully drunk and he’s not in control of himself.” Asked by the 911 operator whether the man was “under the influence of something,” the caller said: “Something like that, yes. He is not acting right.” Police said Floyd matched the caller’s description of the suspect.

The U.S. Attorney’s Office and the FBI in Minneapolis said Thursday they were conducting “a robust criminal investigation” into the death. Trump has said he had asked an investigation to be expedited.

The FBI is also investigating whether Floyd’s civil rights were violated.

Chauvin, the officer who kneeled on Floyd's neck, was fired Tuesday with three other officers involved in the arrest. The next day, the mayor called for Chauvin to be criminally charged. He also appealed for the activation of the National Guard.