Two men and a woman from Milwaukee are accused of a four-day crime spree that included several robberies, stolen cars and a kidnapping all over the New Year's holiday weekend.

MILWAUKEE - Two men and a woman from Milwaukee are accused of a four-day crime spree that included several robberies, stolen cars and a kidnapping over the New Year's holiday weekend. The accused are Joshua Franklin, 27, Kortez Hogan, 33 and Madisyn Brakke, 20.

It started with the theft of a truck on New Year's Eve and then took an even darker turn. Prosecutors say all three offered some form of a confession. 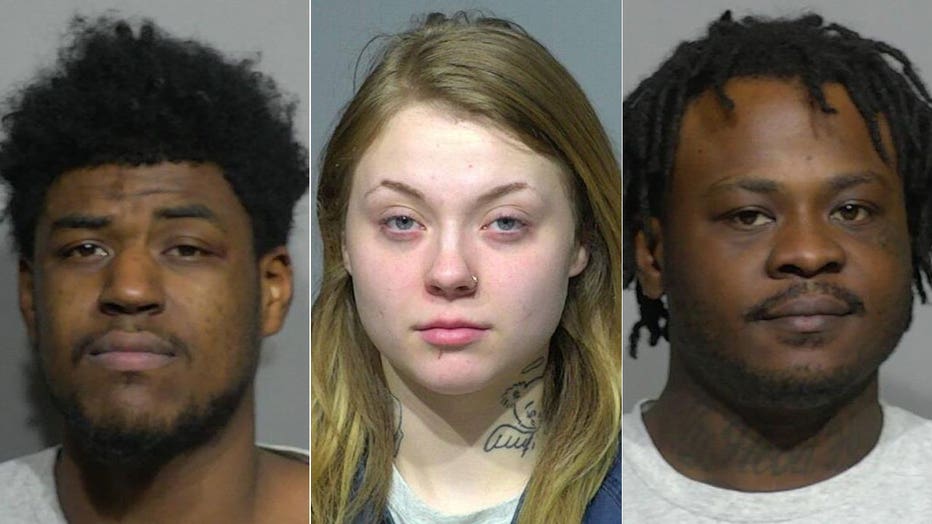 According to the criminal complaint, someone went to Milwaukee Police District 3 to report his stolen SUV on Friday, Dec. 30. He told authorities he was locking up his business near 20th and Brown Street and his SUV was running. When he turned around, he saw his vehicle being driven away. The SUV owner told police there were two guns inside.

Walgreens robbery near 27th and North

Around 5:30 p.m. on Dec. 30, police responded to a report of an armed robbery at the Walgreens near 27th and North Avenue.

A pharmacist told police a man "who appeared disheveled" approached the counter and demanded something to relieve pain from a toothache, the complaint says. When the pharmacist offered several options, the man then handed a note that read: "I need perk, zans, lean of my addiction killing whoever get hit first." The pharmacist had to read the note a couple times before understanding what it said, prosecutors say, and believed he saw a gun in the man's pocket.

Believing he was being robbed, the pharmacist told police before he could respond to the man, the man "turned around and walked to the front of the store." A short time later, the manager told the pharmacist someone had robbed the front of the store. Detectives spoke with the cashier up front who stated the man "quickly lunged over the counter stating, 'I'll kill you,'" the complaint says. The man "took cash from the drawer" and ran away. 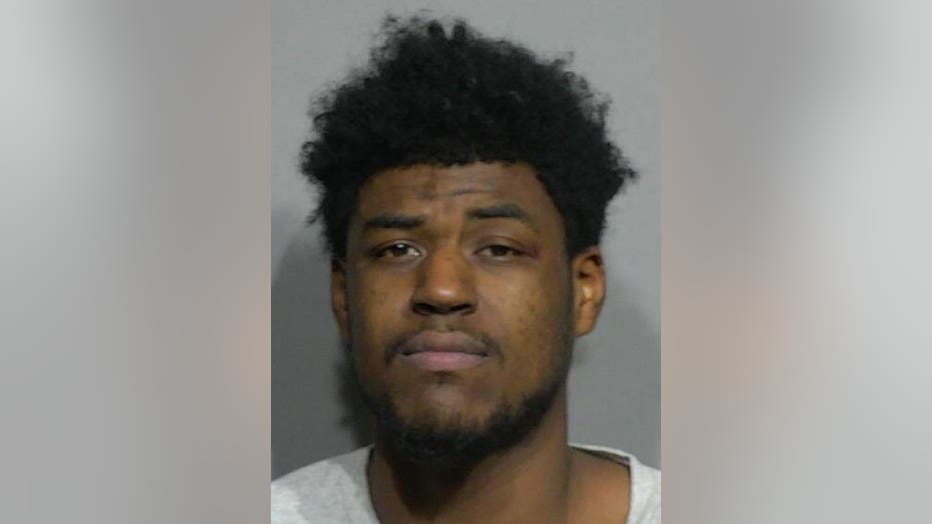 Earlier in the day, a security guard indicated two men, one of them armed, had been at the Walgreens at 27th and North. One person was heard asking where the security guard and pharmacy were located. However, the pharmacy was closed, and the two men walked out of the store.

Walgreens robbery near 91st and Appleton

Around 7 p.m. on Saturday, Dec. 31, police responded to a report of an armed robbery of a Walgreens near 91st and Appleton.

A worker told police a man approached her and tried to buy some lip balm and caramels. After the transaction, the man "pulled out a handgun from his waistband and pointed it at her, stating, 'Give me all of the (expletive) money,'" the complaint says. The worker said she was frightened and ran away from the register.

Surveillance video showed the man then reached over the counter and removed "the entire cash register" before leaving the store, according to prosecutors.

On Sunday, Jan. 1, police responded to a report of an armed robbery near 14th and Edgerton on the city's south side.

A man working as a Lyft driver stated he was in contact with someone known to him as Mady Brakke. He had given Brakke rides and began to develop a relationship with her, he told police. The driver had even given Brakke about $40 through a cash app. The two eventually arranged to meet at a hotel in downtown Milwaukee. 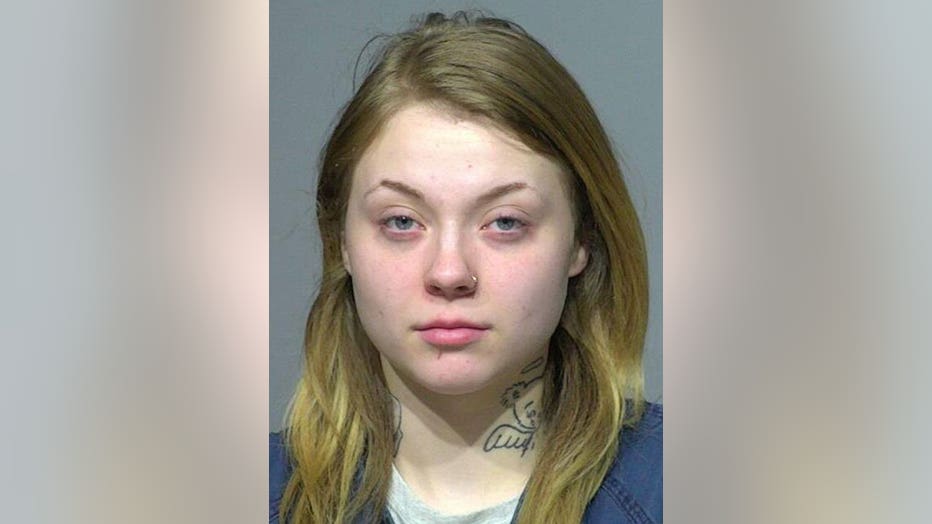 The complaint says when the Lyft driver ended his shift around 4 a.m. on Jan. 1, he reached out to Brakke who stated a friend was not at home, and they could meet at a residence near 48th and Clarke. The Lyft driver went to that residence and met with Brakke. The pair went upstairs and "began to hug and kiss and ultimately made it to the bedroom." When both were disrobed, two other people entered the room, pointed guns at the driver and accused him of having sex with a 16-year-old," the complaint says.

The Lyft driver provided a credit card, stating that's how he could pay them. The two men began recording video of the driver in bed and "continued to demand money from him and threatened to kill him," the complaint says. The Lyft driver told police "at one point, he was hit over the head."

Around 7 a.m. on Jan. 1., the Lyft driver told police he was forced to enter the rear of a smaller pickup truck by one of the two men, who was armed with a silver revolver. They went to a residence near 14th and Edgerton, and the driver ended up in a physical struggle with one man. He managed to get away from the apartment building and called police.

Speedway robbery near 9th and Lincoln

Around 8:30 a.m. on Jan. 1, Milwaukee police were dispatched to the Speedway gas station near 9th and Lincoln for a reported robbery. A worker stated he noticed a man going through bags of chips. When the worker went to the security cage, the man "pulled him backwards and then pressed an object into his back. (The worker) feared it was a gun. (The worker) stated that the subject demanded he open the cash registers," the complaint says. The man took money and fled in a pickup truck.

On Jan. 2, officers obtained a search warrant for a residence near 48th and Clarke. Multiple people were located inside, including Hogan and Franklin. Both matched the description of the two armed individuals involved in the incident with the Lyft driver, the complaint says. A search of both the upper and lower unit "revealed a black Glock handgun in a backpack in the lower unit, 81.60 grams of THC in the lower unit, 21.75 grams of crack cocaine in the attic and 40.6 grams of Methamphetamines in the attic," the complaint says.

During interviews with police, Franklin "admitted that he has an expensive, over $500 a day crack addiction," the complaint says.  Franklin went on to admit to being involved in the crimes listed above and even identified himself in surveillance video presented to him. In connection with the crimes tied to the Lyft driver, Franklin told police "the whole incident was put together by Brakke," the complaint says.

Hogan and Brakke were also interviewed by investigators. Hogan "initially denied knowing Brakke but later admitted that he knew her. Hogan also admitted to going with Brakke to a gas station to buy some items where (the Lyft driver's) credit card was used," the complaint says. 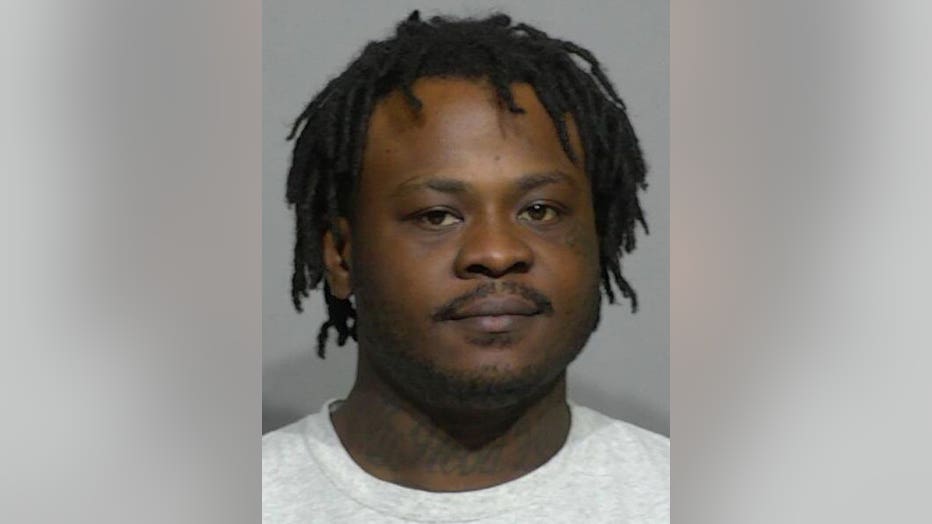 For her part, Brakke admitted to investigators that she was with the Lyft driver on Jan. 1 when Franklin and Hogan, "entered the room with guns and demanded (the driver) pay them," the complaint says. Brakke in that interview also "admitted that she knew when she called (the Lyft driver) over that they were going to try to get money from him, but it was supposed to be non-violent," the complaint says. Brakke also admitted to using the driver's credit card to put gas in a car.