LJUBLJANA, Slovenia -- A wooden statue of first lady Melania Trump near her hometown in Slovenia was reportedly set on fire on the Fourth of July, prompting its removal.

“I want to know why they did it,” Brad Downey, an American artist who commissioned the sculpture, told Reuters. If the suspect or suspects are caught, Downey said, he would like to interview them for a film he’s making that will be part of an upcoming exhibition of his work in the first lady's native country.

The life-size crude rendering of the first lady was carved out of a tree trunk by a local artist and unveiled last summer. 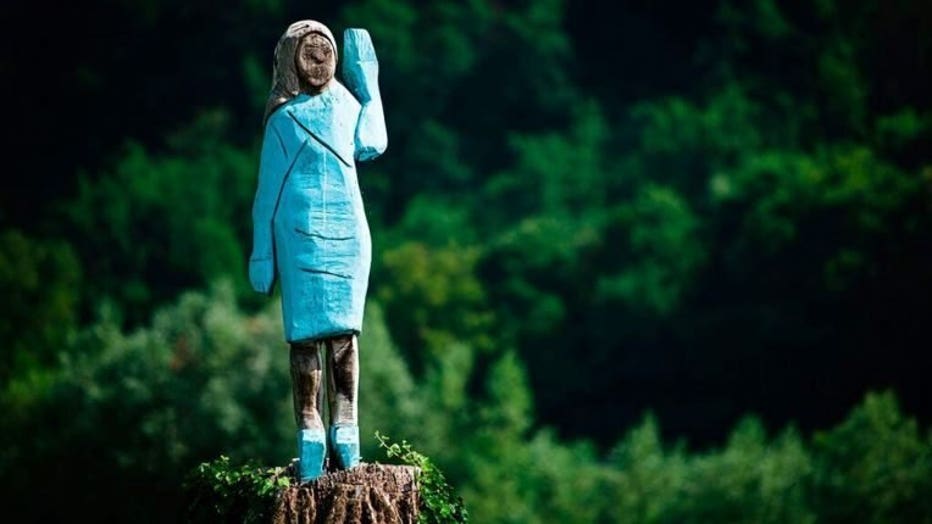 Downey, who filed a police report regarding the vandalism, said he had envisioned the statue as a way to highlight the fact that the first lady is an immigrant in a U.S. administration vowing to reduce illegal immigration and some forms of legal immigration, Reuters reported.

The statue has been controversial since its inception with some saying it looked more like a “scarecrow” than the first lady.

Earlier this year, a wooden statue of President Trump in Slovenia was burned to the ground, according to BBC News.

In the U.S., statues of historical figures have become targets of protesters since the May 25 death of George Floyd, a Black man who died in police custody in Minneapolis.

Monuments to Confederate leaders were the protesters' initial targets. They then moved on to slaveholders – including Founding Fathers George Washington and Thomas Jefferson – and other controversial figures such as Christopher Columbus, whose legacy is complicated.

Protesters often vandalize statues with graffiti, pull them down with ropes or set them on fire.

Amid the vandalism of statues of figures deemed to be racist, others have been targeted as well. Protesters in Wisconsin this month ripped down the "Forward" statue, a depiction of a woman who symbolizes progress, and last weekend, vandals in Rochester, N.Y., pulled down and damaged a monument to abolitionist Frederick Douglass.

The vandalism of statues has gone worldwide. Even one of Britain's wartime Prime Minister Winston Churchill was defaced in London.

President Trump has vowed to protect historical statues and punish vandals with jail time. He has also proposed a "National Garden" of heroes that would include statues of high achievers from politics, the military, science, history, sports and religion.