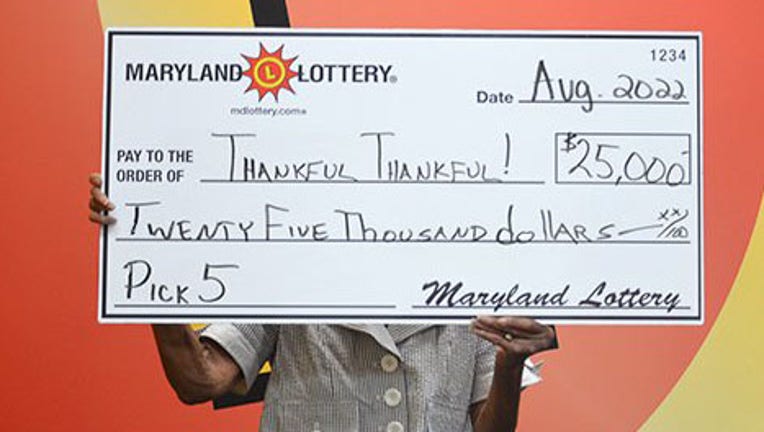 A woman, identified as "Thankful-Thankful," was very grateful that a dream resulted in a $25,000 Pick 5 prize in Maryland. (Credit: Maryland Lottery)

BALTIMORE - A woman in Maryland is "thankful, thankful" after winning a $25,000 lottery prize based on numbers from her sister’s dream.

The lucky lady was only identified as "Thankful-Thankful," a 68-year-old resident of the Baltimore suburb Cockeysville. Maryland is among the states where lottery winners can remain anonymous.

The woman often plays the Pick 3, Pick 4, and Pick 5 lottery games using numbers that she sees in her dreams, according to Maryland lottery officials. But this time, she used a set of numbers from a dream her sister had — which led to the winning Pick 5 prize.

The woman told lottery officials that her sister had a dream that she was on a bus and the bus number in the dream was "23815." After hearing the story, the woman decided to play those numbers on a 50-cent straight ticket in the July 29 midday drawing.

She later scanned the ticket and learned she was a winner, claiming the prize on Aug. 2

"I was excited. I saw nothing in my Pick 3 and Pick 4 tickets, but when I checked the Pick 5 it was straight across. I couldn’t believe it," the woman told Maryland lottery officials.

The Baltimore County resident is retired and said the prize money will help to pay bills. There was no word on whether the woman’s sister would get a cut of the earnings.

In addition to playing the lottery, the female winner said she also enjoys playing games on her phone, including Sudoku and FreeCell solitaire.

"I like to play those games to keep my mind busy," she added.

This method of dream-inspired lottery numbers has worked in the past. Earlier this summer, a Virginia man won a $250,000 lottery prize after taxes using numbers that came to him in a dream.

Alonzo Coleman, a retiree who lives in the Henrico, Virginia, area, played the state’s Bank a Million game, in which individuals pick six different numbers from 1 through 40. Coleman spent his $2 on the unusual sequence of numbers 13, 14, 15, 16, 17, and 18, a set of numbers that he said came to him in a dream. He later matched all six winning numbers for the June 11 drawing.

Meanwhile, a South Carolina man recently found himself $100,000 richer after testing out a lottery strategy he saw while watching an episode of the TLC series "Lottery Changed My Life," which chronicles the change in lifestyle and appearance of lottery winners.

"The first week I won $500," the man told state lottery officials. "I didn’t even know how to play Powerball."