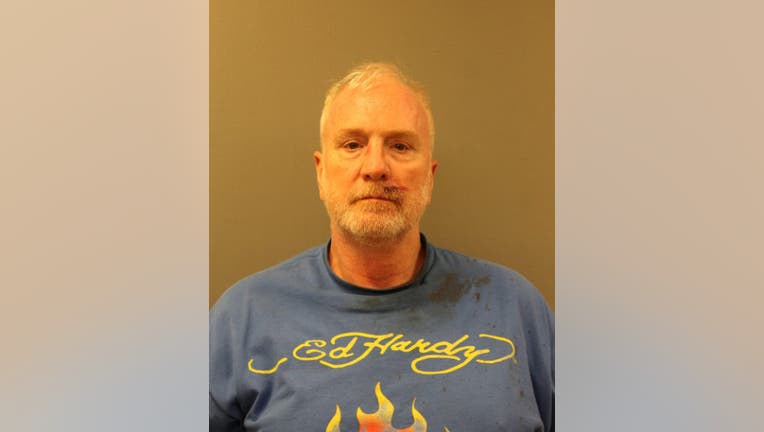 CHICAGO - A man is facing four counts of attempted first-degree murder after he intentionally jumped a curb and struck a woman with his car Saturday in the Logan Square neighborhood, police said.

Timothy Nielsen, 57, was arrested at the scene in the 2900 block of West Logan Boulevard.

Police said Nielsen -- a convicted felon -- deliberately drove his car over the curb at a group of people having a picnic. Cook County prosecutors said Monday that Nielsen became annoyed by "yuppies on the boulevard" and their dogs before carrying out the attack.

"Watch what I’m going to do," Nielsen allegedly told a resident before driving his red Ford F-150 onto a grass median and into the group of 10 to 15 people and their dogs.

A 42-year-old woman was struck by his car and dragged, sustaining "serious injuries." She was taken to Illinois Masonic Medical Center by ambulance.

A second person was also injured, but was listed in good condition, and a third person declined treatment at the scene, officials said. It was not immediately known if the driver was among those injured.

'There was no doubt in my mind this person wasn’t trying to back up to get into an open parking spot or anything like that. He literally jumped the curb, aimed at the people and gunned his truck,' one witness said.

Nielsen, who also lives in Logan Square, became "increasingly hostile" at the partygoers, complaining about their dogs’ behavior in public, prosecutors said.

The picnickers, who were celebrating a birthday, asked Nielsen, 57, to leave.

But instead of driving away, Nielsen reversed his truck and turned the steering wheel toward the group, prosecutors said.

He didn’t clear the curb at first but on his second attempt, Nielsen allegedly made it onto the grassy parkway and ran over the group’s bicycles and chairs before striking the victims, prosecutors said.

After striking the victims, Nielsen attempted to drive away but a Yeti cooler wedged underneath his truck kept it from moving. Witnesses tried telling him that someone was under his vehicle and when some others tried to pull him out of his truck, he allegedly brandished a knife. He ended up swinging the weapon at someone, causing minor cuts to that victim’s arm, prosecutors said.

Nielsen was eventually disarmed by a grandmother who had been driving in the area with her granddaughter, prosecutors said.

The woman, who made a U-turn before stopping to help after she saw Nielsen run into the crowd, was also able to take the keys out of the truck’s ignition, prosecutors said.

Had it not been for the Yeti cooler, the intentional attack would have been "even more disastrous," prosecutors said.

"His intent was to plow through that crowd, and that is what he did," as assistant state’s attorney told Judge John F. Lyke Jr. Monday.

The neighbor who Nielsen approached before running into the crowd had been watering his flowers when Nielsen asked him how long he lived in Logan Square, prosecutors said.

When the man said almost 20 years, Nielsen allegedly told him how he "annoyed by yuppies on the boulevard, who are out with their dogs."

Then Nielsen told the man to "watch" what he’d do and sped down the alley, prosecutors said.

The Chicago Tribune and Block Club previously reported that a witness said Nielsen made anti-Asian comments before the attack. Prosecutors, however, did not mention such comments in court.

Witnesses said the crash was motivated by anti-Asian hate.

Vincent Geraghty said he witnessed the incident as he was walking across the street.

"There was no doubt in my mind this person wasn’t trying to back up to get into an open parking spot or anything like that. He literally jumped the curb, aimed at the people and gunned his truck," Geraghty said. "I didn’t hear what the driver was saying, but whatever confrontation started this, after doing this horrific [thing], the guy was still seemed to be angry and adamant about confronting the people, which was just shocking."

"The Asian American Caucus calls on the Chicago Police Department to investigate yesterday's nearly fatal attack, which followed anti-Asian racial slurs, as a hate crime," said MWRD Commissioner Josina Morita, Chair of the Asian American Caucus, in a statement. "Given the significant increase in the numbers and level of violence of anti-Asian attacks in the Chicago area, and across the county, we need leadership from Mayor Lightfoot and immediate action from the Chicago Police Department to combat the rise in anti-Asian hate and protect Asian Americans, and all communities."

Nielsen has several prior felony convictions, including a 1989 kidnapping. In that incident, Nielsen and an accomplice posed as police officers and kidnapped a man, whom they beat and held in a garage for ransom, prosecutors said.

In 1999, Nielsen and his brother admitted in federal court to loaning thousands of dollars to two men and collecting huge interest payments enforced with beatings, according to the Chicago Sun-Times.

Nielsen admitted that he smashed glass "in the eye area" of the escort-service operator on May 29, 1994, sending the man to the hospital for head trauma and a gash that required five stitches.

He also committed extortion in 2001 and retail theft in 2012, prosecutors said.

Lyke ordered Nielsen held without bail for attempted murder "especially since the weapon of choice appears to be a vehicle which is easily accessible."

"People were enjoying this sunny beautiful day, which it was, and that this defendant appeared to rain on their parade literally and figuratively," the judge said.

Nielsen is expected back in court May 10.