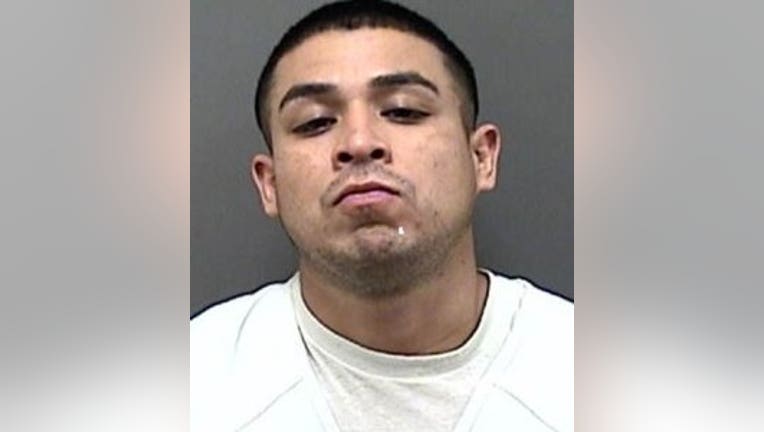 RACINE COUNTY -- More than a year after bench warrants were issued for his arrest, a Horicon man appeared in court in connection with two open cases from 2017 and 2018 out of Racine County. Prosecutors said in June 2017, Bryan Velasco started a fire in the bedroom of his home when he improperly discarded a marijuana joint. In June 2018, prosecutors said Velasco provided a fake ID at the scene of a hit-and-run crash.

The June 22, 2018 arrest happened at the Burger King restaurant on Durand Avenue near Wood Road, where police responded for a report of a hit-and-run.

A criminal complaint said the victim exited the restaurant and noticed his vehicle was damaged. A manager provided surveillance video to police, and identified the suspect as "Bryon." Velasco provided investigators with a California ID card with the name, "Bryon Velazco," with a birthdate that ended up being incorrect. He said he was not aware of the crash and did not know the victim. He later said he knew the victim as "Sergio." He was detained as officers worked to ID him.

Velasco had a warrant out of California for domestic violence, the complaint said, and investigators determined the California ID contained information that was wrong -- including the name and birthdate. Additionally, investigators learned there was a warrant for Velasco through the Wisconsin Department of Corrections.

As he was being detained, the complaint said officers noticed an odor of intoxicants, and he blew a .017. He was on probation at the time, with a condition that he consume no alcohol. This, after he pleaded no contest in August 2017 to one count of violating a foreign protection order, felony domestic abuse repeater. He was sentenced to serve two years' probation and six months' jail time.

He was charged with resisting or obstructing an officer in June 2018.

Fire near Olive and Kentucky in June 2017

Nearly a year before the Burger King incident, on June 25, 2017, Velasco was charged with negligent handling of burning material, repeater after a fire on Olive Street near Kentucky Street in Racine.

Prosecutors said Velasco was found hiding under a bed after the fire. He was treated for smoke inhalation.

A criminal complaint noted he was involved in a domestic incident earlier that day.

Velasco told investigators he smoked a joint in the basement while in bed, and put the joint down on something that was not fireproof -- telling investigators it was a wooden table. However, the complaint said no such item was found in the debris left behind after the fire. Velasco said he went outside for a cigarette, and when he returned, the bedroom was engulfed in flames. He said he tried to put the fire out and called 911.

Investigators learned the 911 caller "sounded under the influence" -- never identifying himself, nor providing the address of the fire before hanging up on the dispatcher, the complaint said. He indicated he was at "SEJ's High School" and there was fire outside after a bonfire got out of control.

Prosecutors said he admitted to leaving the scene because he was drunk and high.

Bench warrants were issued in both cases in October 2018 after Velasco failed to appear in court in late September 2018. Cash bond was forfeited in November 2018.

Cash bond was set at $250 in each case when Velasco appeared in court on Wednesday, Nov. 6. Status conferences were scheduled for Nov. 22.