A young boy runs up to Pope Francis during the general audience on August 17, 2022. Video: Vatican media handout

Pope Francis got an unexpected visitor during his latest weekly audience — a little boy who rushed up to the pope’s side.

Every Wednesday, Francis holds a general audience during which he greets visitors from around the world and shares a message and benediction. During this one, he just so happened to be talking about the relationship between the world’s youth and the elderly when the young boy appeared from the crowd.

The child’s presence took Francis by surprise, but the pope seemed delighted. Those in attendance began to clap.

Francis opened his arm and welcomed the boy to his side.

"Hey, how are you? What is your name?" Francis said in Italian. "Do you like being here? Make yourself comfortable."

And the child did — he stood by Francis’ side for the rest of the audience. 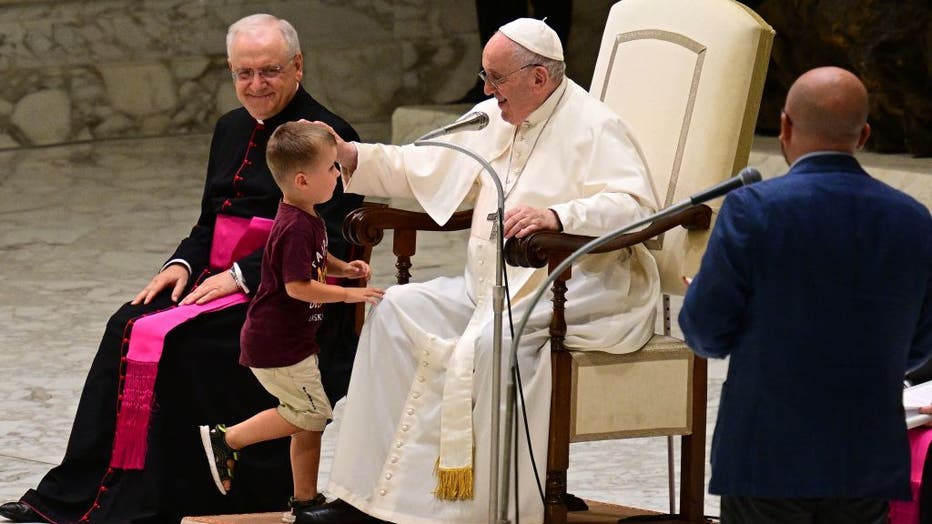 A boy comes to see Pope Francis during the weekly general audience on August 17, 2022 at Paul-VI hall in The Vatican. (Photo by Vincenzo Pinto/AFP via Getty Images)

Francis’ message was about children learning from the elderly to preserve the future.

"In the audience, we were talking about dialogue between old and young. Eh?" Francis said to the crowd, motioning to the boy. "This one has been courageous, he is staying here calmly."

Timeline of the life of Pope Francis

Pope Francis, whose birth name is Jorge Mario Bergoglio, is the leader of the Roman Catholic Church. He's the first pope from South America and from the Jesuit order.

Meanwhile, on the sidelines of Francis’ weekly general audience, he met with a fourth group of transgender people who found shelter at a Rome church.

The Blessed Immaculate Virgin community in the Torvaianica neighborhood on Rome’s outskirts opened its doors to transgender people during the coronavirus pandemic.

Francis previously met with some of them on April 27, June 22 and Aug. 3, L’Osservatore Romano, an Italian newspaper, said.