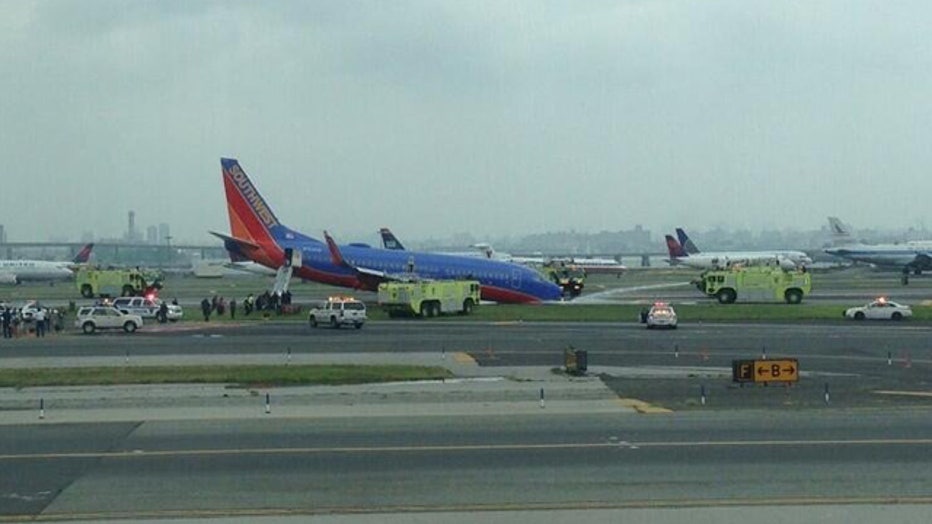 Southwest Flight 345 was landing at LaGuardia from Nashville about 5:40 p.m. when the accident occurred. The nose of the blue-and-orange jet came to rest on the ground after the aircraft came to a stop, and passengers evacuated the aircraft on emergency slides.

"The aircraft skidded down the runway on its nose and then veered off and came to rest in a grass area between the runway and taxiway foxtrot," Thomas Bosco, the airport's general manager, told reporters. It stopped about halfway down the 7,000-foot runway.

Kathy Boles, a passenger aboard the Boeing 737, said a "strong jolt" could be felt inside the cabin when the gear failed and the nose slammed into the tarmac.

"It was just a bang and a bounce, and then a slam on the brakes and a skidding feeling," Boles told CNN's "Anderson Cooper 360."

"I feel extremely blessed to have come off that," she said. "It just really felt like the plane could have broken in half, it was such a hard impact."

A total of 150 people were aboard the flight. In addition to the 10 injured aboard the plane, a Port Authority police officer was treated for heat exhaustion, Bosco said.

There were conflicting reports about how many members of the aircraft's crew were among the injured. Southwest said three flight attendants had reported being hurt, while the Bosco said the six-member crew had been taken to a hospital for observation.

LaGuardia was closed to arriving flights as emergency vehicles surrounded the disabled jet, but the airport was back open for arrivals and departures by 7 p.m., Bosco said.

Initially, the Federal Aviation Administration said the crew reported a possible nose gear problem before landing, but later amended that to say that after it reviewed air controller tapes, no issues were noted ahead of time. The National Transportation Safety Board was aware of the incident and sent an investigator to the scene.

The incident followed a runway crash of an Asiana jetliner in San Francisco last month that killed three people and injured more than 180 others.

Investigators in that crash will not determine a cause for several months at least but initial attention has focused on actions of the crew during approach.

The 737 has a conventional hydraulic landing gear system -- a unit under each wing and a steerable wheel that extends from under the nose. Pilots can land safely with only the main gear operable and such incidents occur from time to time.