Vice President Kamala Harris met with Guatemalan President Giammattei during her three-day foreign trip. She emphasized the need to restore hope for residents of struggling Central American nations to help address the increase in migration from the region as she pleaded with them not to make the dangerous trek.

SINGAPORE - Vice President Kamala Harris asserted Monday that the U.S. must maintain its focus on evacuating Americans and vulnerable Afghans and shouldn’t get distracted by questions over what went wrong in the chaotic U.S. exit from Afghanistan.

Speaking at a news conference in Singapore, Harris repeatedly declined to engage when asked what she felt should have been done differently in the withdrawal.

"There’s no question there will be and should be a robust analysis of what has happened, but right now there’s no question that our focus has to be on evacuating American citizens, Afghans who worked with us and vulnerable Afghans, including women and children," she said.

Harris took questions alongside Singapore Prime Minister Lee Hsien Loong after the two met for about two hours to discuss issues ranging from the COVID-19 response to cybersecurity and supply chain cooperation. The news conference was dominated by Afghanistan, after the messy U.S. withdrawal sparked concerns about America’s commitments to its allies globally.

Harris’ visit to Singapore and Vietnam this week is seen as the first real test of the Biden administration’s ability to reassure key allies of its resolve.

Prime Minister Lee offered his country’s support for the U.S. decision to withdraw, however, and said Singapore was "grateful" for the U.S. efforts to combat terrorism in Afghanistan. He also offered the U.S. the use of the Singapore Air Force’s transport aircraft to help with the evacuation, and said the country is now watching what the U.S. does next.

"What matters is how the U.S. repositions itself in the Asia Pacific, engages the broader region and continues to fight against terrorism, because that will determine the perceptions of the countries of the U.S.′ global priorities and of its strategic intentions," he said.

Harris’ Southeast Asian trip, which brings her to Singapore and then later to Vietnam this week, is aimed at broadening cooperation with both nations to offer a counterweight to China’s growing influence in the region. 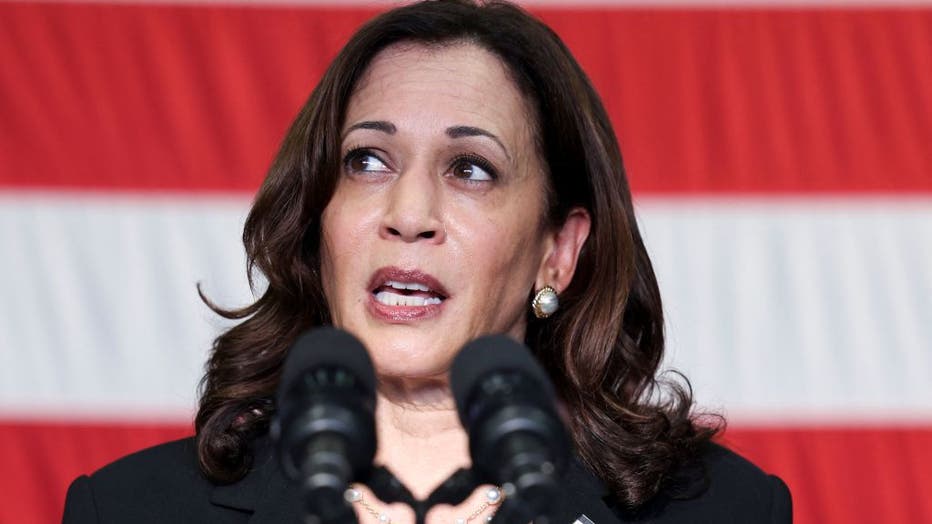 On cybersecurity, the Treasury and Defense Departments, as well as the Cybersecurity and Infrastructure Security Agency, have each inked a memorandum of understanding with their Singapore counterparts expanding information sharing and training to combat cyberthreats.

The two nations agreed to cooperate more closely to track COVID-19 variants and engage in research on coronavirus treatments. And the Department of Commerce is joining with the Singapore Ministry of Trade and Industry to create a partnership focused on strengthening trade throughout a handful of key industries.

Later Monday, speaking to sailors on a U.S. Navy combat ship at Singapore’s Changi naval base, Harris expressed gratitude for the U.S. soldiers and embassy staff working in an "incredibly challenging and dangerous environment" to evacuate Afghanistan.

On Tuesday, Harris will deliver a speech outlining the Biden administration’s vision for the region, and meet with business leaders to discuss supply chain issues. During her remarks at Changi naval base, Harris seemed to preview her Tuesday speech, describing the Indo-Pacific region as "critical to the security and prosperity of the United States."

"I do believe a big part of the history of the 21st century will be written about this very region where you now serve. And we want to be the ones who are helping to shape and dictate that history," she said.

The trip marks Harris’ second foreign trip in office — she visited Guatemala and Mexico in June — and will be the first time a U.S. vice president has visited Vietnam.

Singapore is the anchor of the U.S. naval presence in Southeast Asia and has a deep trade partnership with the U.S., but the country also seeks to maintain strong ties with China and a position of neutrality amid increasingly frosty U.S.-China relations.

Relations between the U.S. and China deteriorated sharply under Biden’s predecessor, Donald Trump, and the two sides remain at odds over a host of issues including technology, cybersecurity and human rights.

Alexander Feldman, president and CEO of the US-ASEAN Business Council, said Harris will have to be careful in her conversations with Singapore’s leaders not to focus too heavily on China, but to emphasize a positive, productive U.S. relationship with Singapore and Vietnam.

"Where she could fall into a trap is really trying to pit this as a U.S. versus China trip. It should be a U.S. trip to our friends and partners in Southeast Asia," Feldman said.

If China becomes the main focal point, he said, "that makes it harder for our friends to move forward across the region, not only in Singapore and Vietnam but beyond that."

Indeed, Singapore Foreign Minister Vivian Balakrishnan said in a recent interview that Singapore will "be useful but we will not be made use of" in its relations with both countries, and the nation’s prime minister previously warned the U.S. against pursuing an aggressive approach to China.

Beijing, however, has seized on Harris’ trip, with China’s official Xinhua News Agency issuing an editorial Saturday on the visit portraying it as part of a drive to contain China.

Visits to Southeast Asia by senior Biden officials are aiming to "woo these countries to form a ring of containment against China. But Southeast Asian countries are reluctant to choose sides between China and the United States, and America’s ‘wishful plan’ will end in failure," Xinhua said.

The U.S. approach is based on "outdated Cold War thinking and is intended to provoke troubles in their relations with China, create division and confrontation, and try to create a ring of containment," the editorial said.