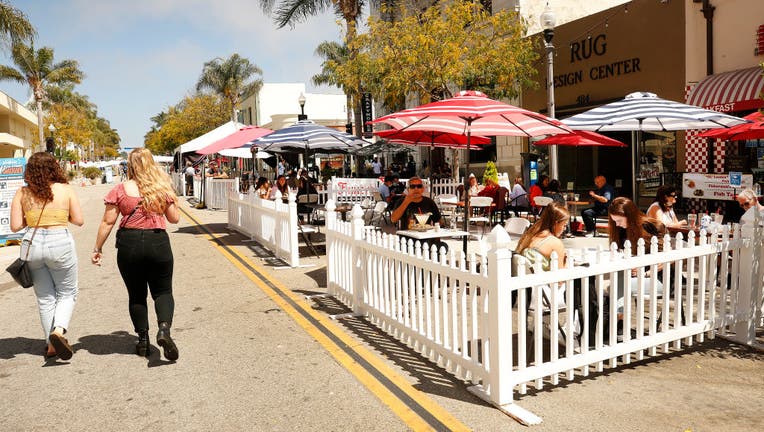 LOS ANGELES, CA - AUGUST 11: Pedestrians are required to wear a mask and practice social distancing when visiting Main Street in downtown Ventura which has been closed to vehicle traffic to allow restaurants and businesses to accommodate for outdoor

OAKLAND, Calif. - Scientists, business owners, politicians and customers had strong reactions to the possible curfew idea that California Gov. Gavin Newsom floated on Monday, as his administration pushed 94% of the state into the most restrictive, purple tier.

Newsom acknowledged that most don't even like the idea of the word "curfew" because of its connotations of freedom limits, but he did say he was studying what was being done in France, Germany and Saudi Arabia for example, on government crackdowns of certain businesses to keep people home earlier during the pandemic. In California, bars already close early, so people in the Golden State wonder what a curfew would really mean.

Brad Pollock, associate dean of public health sciences at the University of California, Davis, School of Medicine, said the “jury is still out” on whether forcing most businesses to close indoor services will slow the spread of the virus.

With the “very scary” trajectory of cases, the new order may provide “a shock to the system” that convinces people to change their behavior and not travel or spend time with people outside of their household, he said.

“People kind of get the false idea that hey, it’s not that big of a deal,” he said. “If you don’t do this, and you continue on this path, everybody is going to get infected with this and we’re going to have deaths like you haven’t seen.”

However, many business owners don't agree.

“We think a restaurant is a safer place to be than in a friend’s living room,” said Jot Condie, president & CEO, California Restaurant Association. “Yet restaurants and their employees are again being forced to pay a price for behavior that has little or nothing to do with them.”

Dr. Mark Ghaly, the state’s health secretary, said research has shown businesses have been sources of virus transmission. He mentioned instances where friends have gathered in close proximity for meals and drinks.

But Ryan Summers, the owner of Pizza Flora in San Jose, said he is not sure how going home earlier if he's operating all day, would make a difference. If anything, it's just a recipe for economic disaster.

The Associated Press and KTVU's Azenith Smith contributed to this report.