SHEBOYGAN— A 17-year veteran of the United States Navy got the boot after he discloses a mental illness, but it's what the government's been doing ever since then that had his family calling the FOX6 Investigators for help.

It was hard enough for Nate Duszynski to accept his naval career was over, but then the government started taking his severance pay,  disability checks and tax refunds, even garnishing his wages -- more than $106,000 so far and still counting.

Duszynski and his wife say no one will tell them when it's going to end, and it all started when Duszynski disclosed a mental illness that set off a chain of events that led to his removal from the military.

Duszynski was a chief petty officer who worked as a nuclear mechanic on aircraft carriers. He served two tours aboard the (now decommissioned) USS Enterprise and two more aboard to USS Lincoln. The job required him to hold a special clearance for Nuclear Field Duty, which he held through multiple contracts and extensions. Until, that is, he became depressed.

"There was no end and I wanted the pain to stop," Duszynski said.

Duszynski had spent so much time overseas, his wife said their two young children hardly knew him.

"When they were little, they didn't remember from time to time who Daddy was," Jaci Duszynski said. 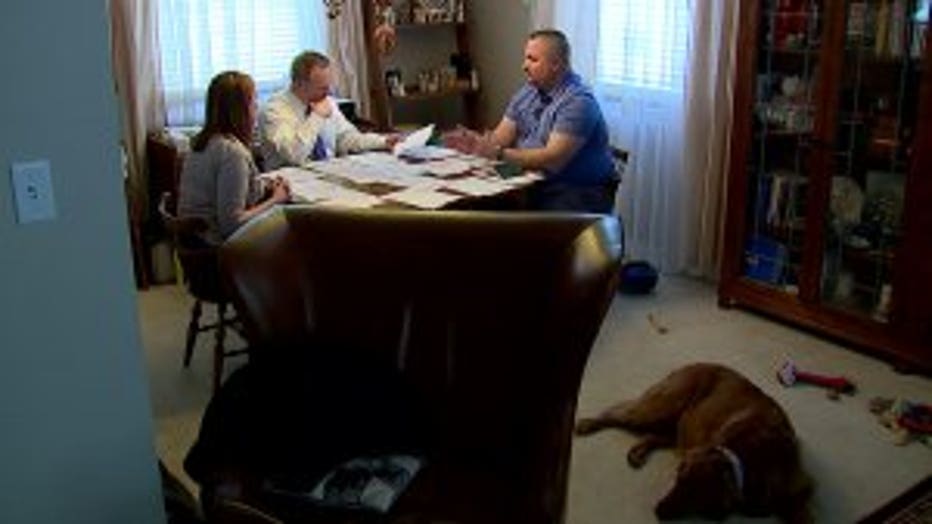 One son had undergone a series of skull surgeries, but Nate Duszynski could not be there to help. Back home in Sheboygan County after his fourth tour, he became severely depressed.

He made plans to commit suicide.

"Just literally to walk off the aft end of the ship," he said. "I was a chief. I ran that part of the ship. No one would question why I would walk out there."

His wife convinced him to get help instead. He was committed for three days of in-patient treatment at Columbia St. Mary's Ozaukee campus, where he was placed on anti-depressant medication and then released. A military doctor continued the prescription and Duszynski says the doctor told him it was OK to take, even with his nuclear job assignment.

"You wanted to stay in the Navy?" asked FOX6 Investigator Polcyn.

"I did. I had two kids, a wife, two dogs, a house payment," Duszynski said.

His wife said he was determined to get back on a ship.

But just before his next deployment, Duszynski was told his nuclear clearance had been revoked because of a disqualifying medication, so he simply stopped taking it. 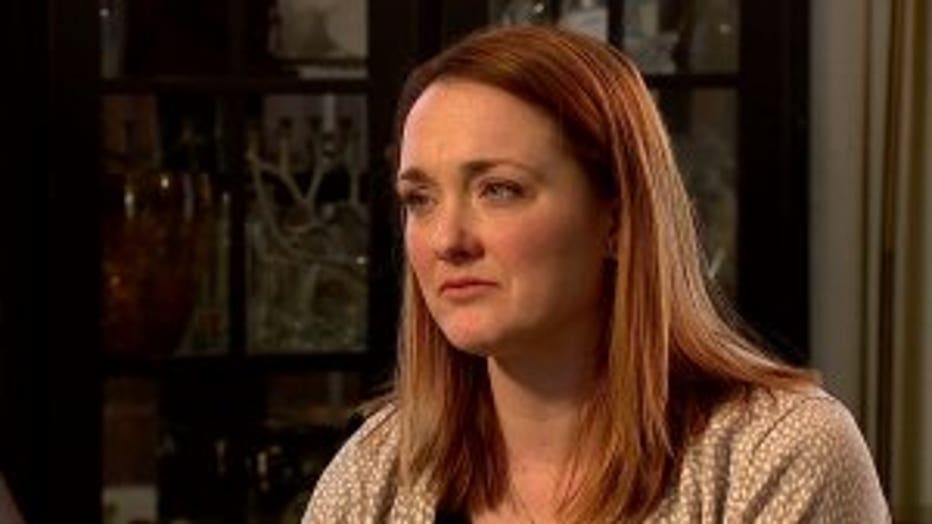 Jaci Duszynski said they've not only had $106,000 taken, but lost their military health insurance and life insurance coverage.

"That's extremely dangerous to do -- to go cold turkey," Jaci said. "I mean, you're messing with your brain chemistry..

Even that didn't save his job, despite a request by his superiors that his nuclear status be reinstated.

"Got sent off back east, and it came back denied because of the suicide attempt," Duszynski said, his voice wavering, tears welled up in his eyes.

In responding to the request for a waiver of physical standards for Nuclear Field Duty, the Navy wrote that Duszynski's history of major depression and a suicide attempt presented too much of a risk.

Things were about to get even worse for the longtime sailor with an exemplary service record.

In the Navy, nuclear engineers are in high demand, so they are offered substantial bonuses to reenlist, so when Duszynski signed a six-year contract in 2008, he received an $89,000 signing bonus, and when he failed a body composition assessment test in December of 2010, the Navy made no attempt to get rid of him.

"It was something that was waived for people in the nuclear field," Jaci Duszynski said.

But his depression changed everything.

"Now that I'm no longer a nuclear operator, I lost that umbrella of protection for my weight," he said.

In January  2015 -- after three more failed BCA tests -- the Navy gave Duszynski an honorable discharge, but instead of listing a mental health disability as the reason, they cited weight control failure. 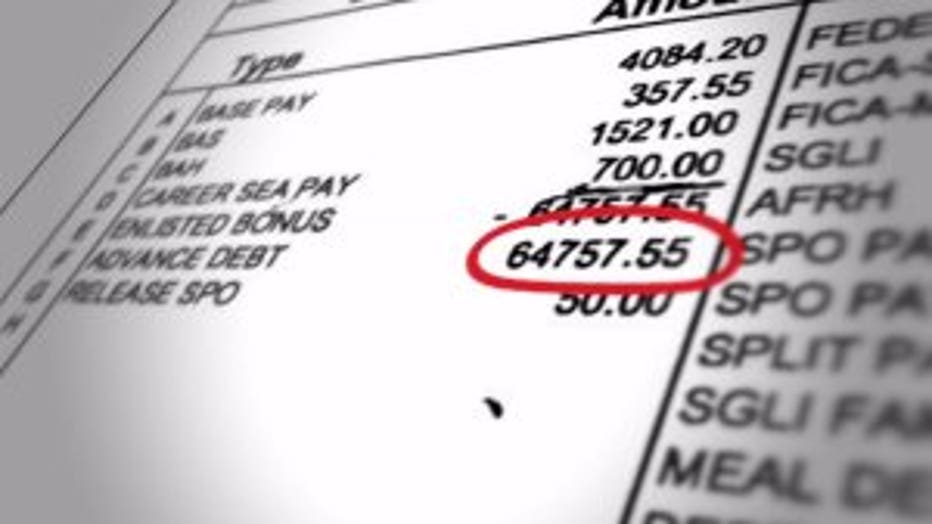 Because Duszynski was officially discharged for "weight control failure" instead of a mental health disability, the Department of Defense began recouping a large portion of his reenlistment bonus.

"I think firing somebody for a mental health issue has a lot of baggage that comes with it, and I think they found this little loophole," his wife said.

Because he was discharged for his weight, the government wanted most of his re-enlistment bonus back -- $64,757.

Duszynski and his wife say no one ever told them it was coming or how long the recoupment would go on.

According to a private collection agency, they still owe nearly $20,000 more, including more than $4,000 in unspecified fees.

All tolled, that's $126,000 in debt collection -- nearly double the amount the Navy said he owed.

"My kid couldn't take hot lunch for two weeks, because we couldn't get the money together," Nate Duszynski said. 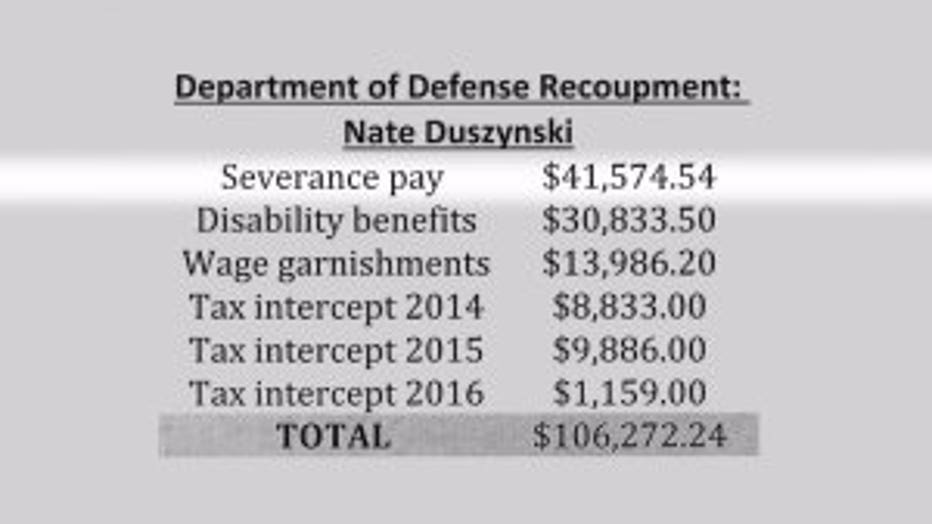 An assistant Sheboygan County veterans service officer declined our request for an interview, but in an email to the FOX6 Investigators, he called the Duszynski case "egregious."

They've contacted every member of the state's congressional delegation, but say it's gotten them nowhere.

"From our congressman to Senator Baldwin, we've even tried to contact Paul Ryan. Nothing happens," he said.

The Senator's staff tells FOX 6 they never told her to "stop calling" and that they have "worked on the family's case for 3 years and continue to do so."

They tried to get Nate Duszynski's discharge changed to a mental health disability, which would have stopped the recoupment; however, the Navy denied the request, writing that there is "no evidence" that major depression made him unfit for duty.

That declaration seems to stand in contrast to the Navy's earlier determination that his "major depression" made him too big of a risk for Nuclear Field Duty. It also seems at odds with the Milwaukee VA Hospital, which determined after his discharge that he qualifies for disability payments, largely because of his "major depressive disorder."

"Their own doctors are disagreeing with each other," Jaci Duszynski said.

Duszynski and his wife have long since given up on the idea of getting the reenlistment money back. They just want the recoupment to stop.

'I just want it over. I don't want anybody to tell me they're sorry, because I know they're not," Nate Duszynski said. "Be done with it. Let me get on with my life."

At the end of the day, they want to send a message about the state of mental illness in the military.

"All the speeches about mental health -- there's still a long way to go," Duszynski said.

Throughout this ordeal, Duszynski and his wife have been helped by Todd Richter, an assistant veterans service officer for Sheboygan County. Richter called the case "egregious," but declined our request for an on camera interview. His boss, Sheboygan County Veterans Service Officer Charlene Cobb sent a letter to FOX6 News calling the situation "unfortunate," but insisting the military is "not at fault" and that Duszynski "bears responsibility" for spending his enlistment bonus before completing his contract.

Here is her complete statement:

I received your email from our County Administrator and he asked that I respond to you directly. While I am sympathetic with the Duszynski’s situation I also believe no one was intentionally derelict in their duties and responsibilities. It is unfortunate that circumstances prevented Mr. Duszynski from fulfilling the contract he made with the US Navy. However he also needs to accept responsibility for his part in getting them to this place in time. He had control over when and how he spent the money he received as a part of that contract. We primarily work with the Veterans Administration; therefore we are not knowledgeable enough to speak on the workings and procedures of the Department of Defense. Our office has helped Mr. Duszynski with his paperwork for the Veterans Administration and we also have worked with other Veterans Service Organizations to assist him and his family while they are working through all of this. You stated, “If I understand correctly, the role of a Veteran Service Officer is to help veterans and their families to identify and apply for benefits they may be entitled to and to be a resource for them in filing claims, etc.” That is true and it is not our place to be discussing any of those situations in a public forum. As I understand it, Nate entered into a contract with the US Navy agreeing to serve as a nuclear engineer for that bonus. There is language in those contracts about recoupment of the bonus if the contract is not fulfilled. When he was no longer able to fulfill his contract (no matter how that happened) he was in default, so the Navy gave him credit for the time he had served under the contract but they wanted the remainder back. I don’t believe the military is at fault here, nor is Mr. Duszynski to blame that he became ill and was no longer able to keep his rating but he is culpable in that he got himself into debt (he didn’t have the money he hadn’t earned yet to return) that he now needs to work his way out of. You also mentioned that Nate had contacted our elected officials. Our Congressional offices do help with navigating through the bureaucracies but they don’t have the authority to ignore laws. Having worked with those offices, I am confident they looked into the situation on his behalf and were told by the Department of Defense that it was in the contract he signed that if he didn’t fulfill his obligation he would not be entitled to the full bonus. Contracts are binding and not understanding all the ramifications of them is not an excuse when things don’t go your way. As Nate’s advocate, my advice, if you really want to help, is don’t bash the government for following common sense rules that you would do in your own personal business. Instead you may want to do a human interest story and setup a GoFundMe account on your website to garner the funds he needs. Wisconsinites in general are very Veteran friendly and you may be pleasantly surprised with their generosity. If you have any further questions, please let me know.

FOX6 News reached out to the offices of U.S. Senator Tammy Baldwin, U.S. Senator Ron Johnson and Congressman Glenn Grothman. All three said they would look into the matter. Senator Baldwin's staff replied with this:

We have worked with Mrs. Duszynski since she first contacted us about her husband’s case in early 2015. We communicated continuously with Treasury, DoD and Mrs. Duszynski from March 2015 to January 2017, when the Naval Board of Corrections formally denied Mr. Duszynski’s appeal to change his reasons for discharge from the Navy. Most recently, our office spoke to Mrs. Duszynski on May 10, 2018 about the continued wage garnishment/debt collection, and following that conversation we reached out to DoD’s finance and accounting office to get a full accounting of their debts and get to the bottom of why additional debts keep getting tacked on.

Our office is standing by to be as helpful as we can through this process to make sure the family gets the information and clarity they need.

Baldwin's staff says they have yet to get a response from the Department of Defense regarding a full accounting of Duszynski's debt and recoupment efforts.

Congressman Glenn Grothman's office says they still have an open case for Nate Dusyznski. In an email sent to FOX6 News on May 15, Grothman's Press Secretary, Tim Svoboda, writes that "more details are forthcoming."