MILWAUKEE -- The family of Joel Acevedo came together Monday, June 29 to call for the arrest of two others in connection to his death.

The 25-year-old was killed at the home of off-duty Milwaukee Police Officer Michael Mattioli during an altercation. Mattioli, 32, faces a charge of first-degree reckless homicide. Court documents allege Mattioli held Acevedo to the ground in a "rear naked chokehold" after accusing Acevedo of stealing from him during a gathering at Mattioli's home near 45th Street and Cleveland Avenue on April 19.

Loved ones are calling for the arrest of two others listed in the criminal complaint as "witnesses."

"One held him down and choked him," said Maribel Acevedo, Joel's mother. "The other one held his legs, and the other one watched. My son is dead. He has no voice. It's an automatic charge of murder." 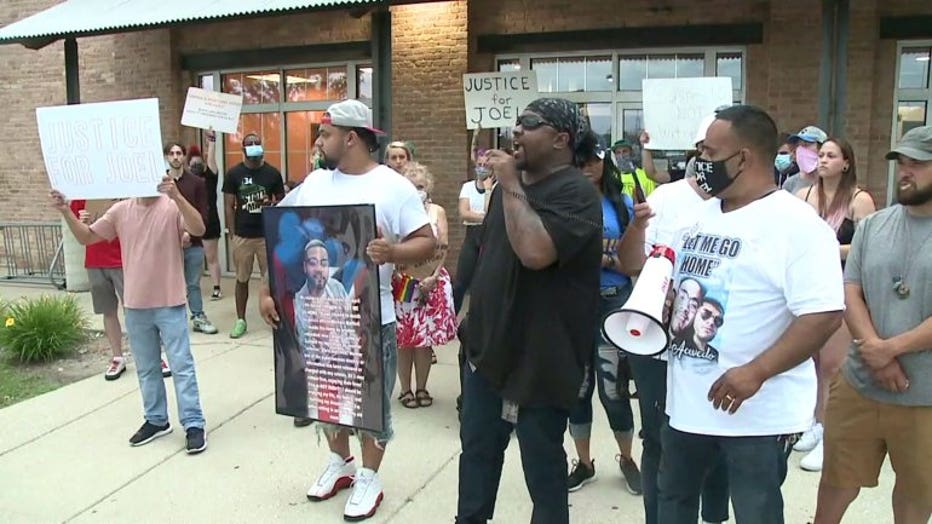 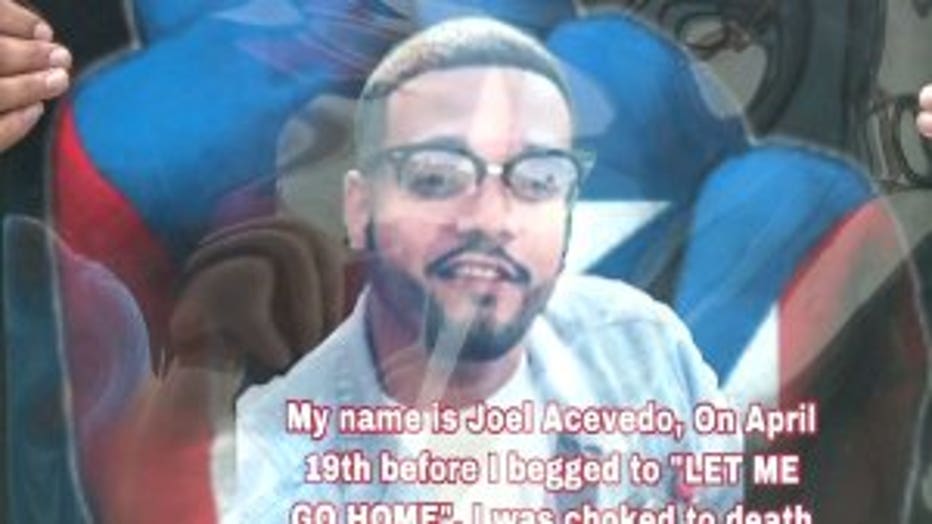 The rally was held in the parking lot of a regional DOC probation and parole office located in Glendale. Family members alleged one of the men they want arrested was employed there at the time of Acevedo's death.

Benjamin Crump, the attorney for the family of George Floyd, joined Acevedo's family's legal team ahead of Mattioli's initial court appearance on June 24 -- when cash bond was set at $50,000 -- an amount attorneys for Acevedo's family felt was too low. A preliminary hearing was scheduled for July 13. At that time, Acevedo's attorneys and loved ones calling for Mattioli's badge, and for body camera footage from responding officers and 911 calls to be released.

As of May 19, Milwaukee police turned over the Mattioli investigation to the Milwaukee Fire and Police Commission. It's the FPC that's responsible for terminating Mattioli's employment. Mattioli remains on paid suspension from MPD until the FPC makes a decision about his employment status.

"Due to recent inquiries regarding the employment status of Michael Mattioli, along with requests for body camera video and 911 calls related to his involvement in the death of Mr. Joel Acevedo, the Milwaukee Police Department reiterates that as of May 19, 2020, the Milwaukee Fire and Police Commission is the only entity that has the authority to terminate the officer for his off-duty actions.

"On April 19, 2020, the day this incident occurred, MPD took extraordinary steps to maintain the integrity of the investigation while keeping the trust of the community. Prior to arriving at the scene on the morning of the incident, Chief Alfonso Morales had already requested that the criminal investigation be handled by the Milwaukee County District Attorney’s Office to avoid any appearance of bias. In addition, the Wisconsin State Crime Lab, an outside and independent agency, conducted the crime scene investigation. That same day, Officer Mattioli was arrested.

"On May 19, 2020, the Milwaukee Fire and Police Commission issued a press release stating it had informed MPD “to cease all current investigations regarding Officer Mattioli, and that my Office will be taking control of the investigation moving forward.” MPD immediately ceased its internal investigation and provided the FPC its requested documents.

"The Milwaukee Police Department understands that the community was seeking immediate resolution of this employment matter given these extraordinary times. However, per state law, no member of MPD may be discharged or suspended for more than 30 days without the Department first finding just cause. In order to determine if there was just cause, MPD could not render discipline until the criminal investigation was completed and the investigatory materials were provided to the Department. MPD was actively investigating the internal investigation, and awaiting additional investigatory materials, at the time the Fire & Police Commission took over this disciplinary matter.

"For all inquiries regarding Officer Mattioli’s employment status, please contact the Milwaukee Fire and Police Commission."