Iguanas are called cold-blooded for a reason. Over the weekend, Floridians were told to watch out for iguanas during the cold snap. This man in Fort Lauderdale captured video of an iguana that was in the middle of defrosting.

The reptiles that usually thrive in Florida’s warm climate have been stunned by the state’s recent streak of low temperatures, which causes them to lose their grip and fall from trees onto unsuspecting residents, the National Weather Service has warned.

Once temperatures drop to the 40s, they become immobile and therefore, could fall out of trees. Wildlife experts say you shouldn’t touch them. Eventually, they’ll warm back up and move again.

"Never take cold-stunned iguanas into your home! These are wild animals and may act defensively once they warm up and recover," according to the Florida Fish and Wildlife Conservation Commission.

The National Weather Service said Sunday it’s all going to warm up nicely after the weekend. The low temperatures near freezing are quite rare in Florida, but at first glance, the citrus, strawberry, and tomato winter crops suffered no major damage. Farmers spray water onto the crops to help protect them from the cold.

As for iguanas, well, that’s another matter. They are an invasive species, well accustomed to the trees of South Florida. When it gets cold, below 40 degrees,, they go into a sort of suspended animation mode. And they fall to the ground.

This drastic change in weather is not particularly harmful to iguanas, said Fox News Senior Meteorologist Janice Dean; but, residents should be watchful of them as males can grow to nearly five feet long and weigh nearly 20 pounds.

"It is so cold in Florida, they are setting record temperatures, and you know they're afraid of the iguanas falling off the trees," Dean added. "They don't freeze, they don't die, but they do kind of go into a state of hibernation, it's crazy."

They usually wake up with the sun’s warmth.

Iguanas are not otherwise dangerous or aggressive to humans and they are allowed to be kept as pets. They have existed in the southern part of the state since the 1960s and prefer the tropical climate of South Florida, the Caribbean, and  Central and South America. They have caused damage to infrastructure, including seawalls and sidewalks, according to agencies in charge of managing the hundreds of miles of canals that channel water throughout South Florida.

It's not the first time South Floridians have witnessed seemingly-dead iguanas fall from the trees during a cold snap. In January 2018 in West Palm Beach, Floridians flooded social media with photos of immobilized iguanas. A prolonged cold spell in 2010 reduced the number of green iguanas in South Florida, but the population has exploded since then. 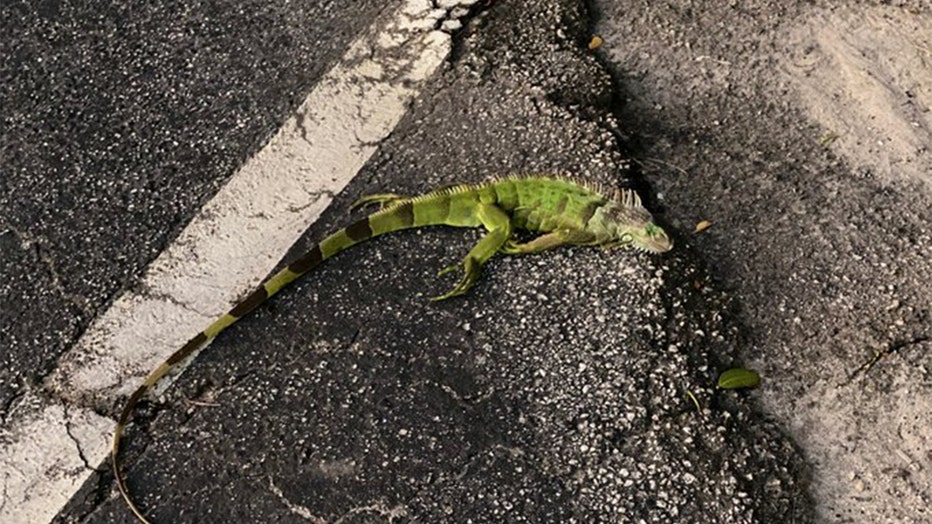 READ: When do iguanas fall from trees in Florida?

The Gasparilla pirate parade in Tampa, which was not held last year because of the coronavirus pandemic, went off without a hitch Saturday in sunny but chilly weather. Thousands of people did pirate-y things, snagged beads from the parade route, and generally ate, drank, and were merry.

Yet the unseasonably cold weather in Florida prompted one church on the Gulf of Mexico side of the state to rethink how it would welcome parishioners and visitors.

St. Michael the Archangel, on Siesta Key, canceled its two scheduled Masses on Sunday because it was too cold. The church is going through a renovation and has been holding Mass outdoors, as it did on Saturday afternoon in 49-degree weather and with brisk winds making it feel even colder.

Masses have been held under a tent, but Saturday’s wind dislodged one of the support posts and rendered the temporary structure unsafe. The Rev. Michael Cannon was offering the sacrament of communion Sunday -- drive-thru style -- but Mass would not be held, in anticipation of temperatures falling into the mid-20s shortly after sunrise in the Sarasota area.

"It would not be wise to have Masses with those kinds of temperatures," Cannon said.

The church is expected to be fully functional again with completed renovations by Easter.

And it’ll be beach weather again in Florida soon. It always is.

FOX News and Associated Press contributed to this report