TOKYO (AP) - If John Coates was trying to stir controversy, he succeeded.

An International Olympic Committee vice president, Coates was asked a few days ago by a Japanese reporter at an online news conference if the Tokyo Olympics would go ahead, even if a state of emergency were in force in Japan.

Coates said what the IOC and local organizers have been trying to persuade the Japanese public about for months: The postponed Olympics with 11,000 athletes from 200 nations and territories will open on July 23 and will be "safe and secure."

But his defiant tone has stirred a backlash in Japan where 60-80% in polls say they do not want the Olympics to open in two months in the midst of a pandemic.

Just over 12,000 deaths in Japan — good by global standards, but poor in Asia — have been attributed to COVID-19. But Tokyo and Osaka and several other areas are under a state of emergency until May 31. And it's likely to be extended.

There is fear of new variants spreading with only a tiny percentage of Japanese vaccinated. Estimates range between 2% and 4%.

"Right now, more than 80% of the nation’s people want the Olympics postponed or canceled," Japanese billionaire businessman Masayoshi Son said over the weekend. He is the founder and CEO of SoftBank Group Corp. He also owns the SoftBank Hawks baseball team.

"Who is forcing this to go ahead, and under what rights?" Son added.

Technically, the games belong to the International Olympic Committee and only it has the power to cancel. Of course, any move would have to be negotiated with Japanese organizers.

There is no suggestion this will happen. 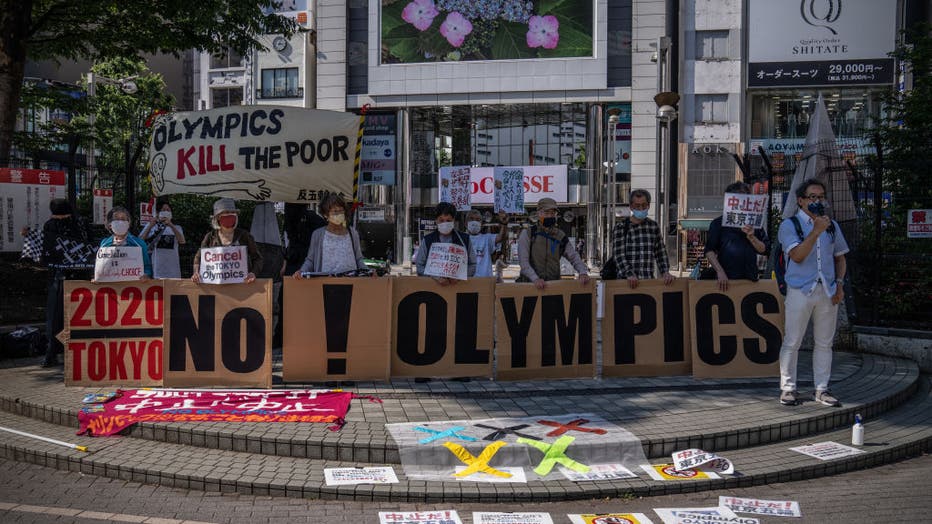 Protesters hold placards as they take part in a demonstration against the forthcoming Tokyo Olympic Games on May 23, 2021 in Tokyo, Japan. (Photo by Carl Court/Getty Images)

Social media criticized Coates, and also went after IOC President Thomas Bach who has said repeatedly that everyone must "sacrifice" to pull off these Olympics, which have already banned fans from abroad. A decision on local fans attending — if any — will be made next month.

The IOC relies on selling television rights for 75% of its income, and Japan has officially spent $15.4 billion to prepare the games. Government audits suggest the figure is much higher. All but $6.7 billion is public money.

The Shukan Post magazine said in its latest issue that organizers have booked all the rooms during the Olympics in at least four of Tokyo's most expensive hotels. The magazine called the accommodations "fitting or royalty" for the IOC and others.

The magazine said the IOC would pay up to $400 per night for rooms, with local organizers making up any difference.

Many of Japan's newspapers are among more than 60 local Olympic sponsors that have contributed more than $3 billion to local organizers. They have been restrained in their criticism, although one of them — the Hokkaido Shimbun — did call for unspecified action from Prime Minister Yoshihide Suga. Suga has said it's the IOC that must determine the fate of the Olympics.

"That inaction itself is forfeiting the responsibility over people's lives and health. Those in charge should take that to heart."

The Shinano Mainichi Shimbun, which is not a sponsor, called for a cancellation in an editorial on Sunday.

"We are in no mood to celebrate an event filled with fear and anxiety," the newspaper said. "The Tokyo Olympics and Paralympics should be canceled ... The government must make the decision to protect the lives and livelihood of the people."

Organizers and the IOC say that the games will be safe because of extensive testing and building a bubble around the athletes. It says more than 80% of the residents in the Olympics Village, located on Tokyo Bay, will be vaccinated.

The comments of Atsuko Saitoh, who identifies herself as midwife and former university professor, are representative of the criticism on social media. She has run unsuccessfully for Japan's upper house and is running in the next lower house election.

"Bach and Coates do not value the lives of the athletes, others involved or the people of the host nation. It’s tantamount to predicting terrorism to say that the games will be held under an emergency, despite the overwhelming opposition in public opinion."