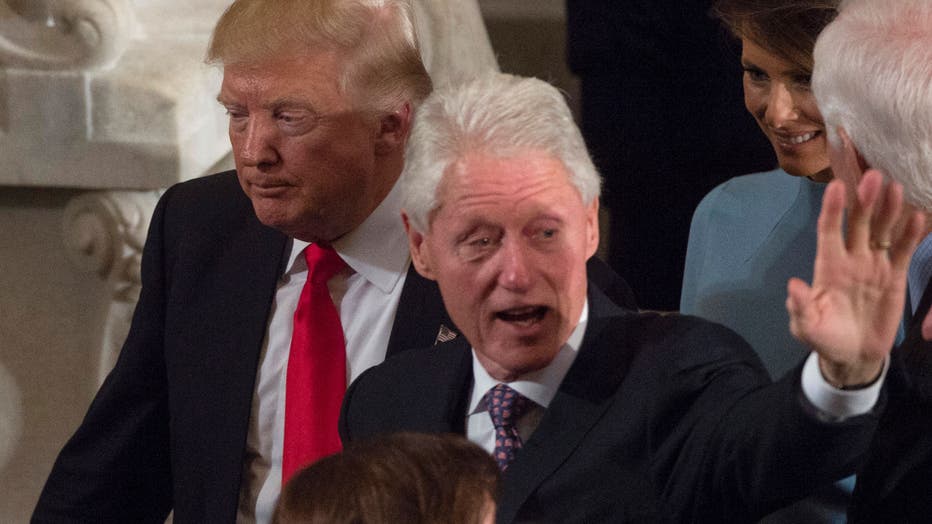 US President Donald Trump passes former President Bill Clinton while leaving Statuary Hall in the US Capitol after the Inaugural Luncheon following Trump's inauguration as the 45th President of the United States, in Washington, DC, on January 20, 201

Americans, along with the rest of the world, were stunned to learn the U.S. president ordered a military strike against a country halfway around the world in response to a devastating attack against civilians. The action was widely supported by lawmakers, including some historically vocal critics of the administration, but then long-term strategic questions began to mount.And the highest levels of the Russian government fumed on the sidelines.

That was in 1998. President Bill Clinton launched more than 80 cruise missiles at targets in Sudan and Afghanistan in response to a terrorist attack on U.S. embassies in Africa. Nineteen years later, President Donald J. Trump would order 59 Tomahawk cruise missiles to hit an airfield in Syria, from which he said a "horrible" chemical attack on Syrian civilians had been launched.

There are obvious geopolitical differences surrounding the two retaliatory strikes — hitting a military target in the midst of a complex civil war is very different from bombing facilities suspected of having links to a relatively small terror group — but in their planning and execution, the the operations bear striking similarities.

A deadly attack, then cruise missiles from Navy ships

On Aug. 7, 1998, two large explosive devices detonated almost simultaneously at the entrances to the U.S. embassies in Nairobi, Kenya and Dar es Salaam, Tanzania, ripping through barriers and sending lethal shrapnel in all directions. When the dust settled, 224 people, including 12 Americans, were dead and more than 4,500 others were injured. Within days, the bombings were linked to al-Qaeda and its then-relatively unknown leader, Osama bin Laden.

Determined to strike back, Pres. Clinton's national security team zeroed in on allegedal-Qaeda assets in Sudan. His targets included a pharmaceutical plant suspected of manufacturing chemical weapons and several suspected terrorist training sites in Afghanistan. Five years earlier, Sudan had been designated a state sponsor of terror, a designation it maintains to this day alongside Iran and Syria.

Thirteen days after the twin bombings, Pres. Clinton fired back with U.S. missiles, mostly destroying the target sites in Sudan, where a night watchman was reportedly killed, and Afghanistan, where up to 30 suspected militants were struck down. Pres. Clinton's Department of Defense used cruise missiles fired from Navy ships.

Nearly two decades later, Pres. Trump did the same thing — this time targeting a Syrian military airfield. In a somber statement the night of the strike, Pres. Trump said he ordered military action as a response to a grisly chemical attack that the Syrian dictator Bashar al-Assad carried out on his own people earlier this week. After heartrending images of dead Syrian children, apparent victims of the chemical attack, circulated on international news outlets and social media, Pres. Trump said, "I think what Assad did is terrible. I think what happened in Syria is one of the truly egregious crimes. It shouldn't have happened. It shouldn't be allowed to happen." Syrian state media alleged the bombardment killed as many as 15 people, including civilians.

In both the Pres. Clinton and Pres. Trump military strikes, the commanders-in-chief declined to seek official approval from Congress ahead of time. In 1998, Clinton-era defense officials said the operation was undertaken in "self defense" against an "imminent and continuing terrorist threat."

Pres. Clinton officially alerted Congress to the strike the next day, on Aug. 21, 1998. "I directed these actions pursuant to my constitutional authority to conduct U.S. foreign relations and as Commander in Chief and Chief Executive," he said.

Pres. Trump, too, appears to have bypassed Congress. On Thursday night, some lawmakers used social media to allege that Pres. Trump needed Congress to grant him authority to act against Assad. John B. Bellinger III, an Adjunct Senior Fellow in International and National Security Law at the Council on Foreign Relations, wrote overnight that Pres. Trump will most likely use a similar argument to the one Pres. Clinton used to legally justify his strike: that he was taking action under this constitutional authority as commander in chief, consistent with the War Powers Resolution.

But in 1998, as well as in 2017, not all of Congress was left in the dark. Pres. Clinton's National Security Advisor, Sandy Berger, told reporters the day of the 1998 strikes that there was "prior consultation" with Congressional leaders just before the operation. The Trump administration notified approximately two dozen lawmakers, CBS News reported.

Despite the slight, however, the each president’s action was met with general approval, with some exceptions, from both their usual supporters and the opposition. Pres. Clinton, a Democrat, earned muted praise from RepublicanNewt Gingrich, then the Speaker of the House, who said, "I think, based on what I know, that it was the right thing to do at the right time."

Pres. Trump, a Republican, is likewise seeing support from lawmakers across the aisle who have reliably been among his loudest critics. Senate Minority Leader Chuck Schumer said on Thursday, "Making sure Assad knows that when he commits such despicable atrocities he will pay a price is the right thing to do." The same day, Nancy Pelosi, the House Minority Leader, said Pres. Trump’s action “appeared to be a proportional response,” before calling for Congressional approval for any escalation. Other Democratscriticized the strike and stressed Pelosi’s second point, urging Pres. Trump to consult Congress before any further action.

And in both cases, the Russians were angry. After Pres. Clinton’s strike, The New York Times reported that then-President Boris Yeltsin was "outraged." My attitude is indeed negative, as it would be to any act of terrorism, military interference, failure to solve a problem through talks," Yeltsin said at the time. Today, Russian President Vladimir Putin has reportedly denounced the U.S. strikes in Syria, saying they were "aggression against a sovereign state in violation of the norms of international law."

Despite initial support for Pres. Clinton's 1998 strikes, they became somewhat controversial after the intelligence linking the pharmaceutical factory to terrorist groups was found wanting. (Years later, the Sudanese government is still fuming because it hadn't received an apology from the U.S. government.)

An after-action assessment of Pres. Clinton’s Afghan strikes concluded that up to 30 people had been killed in the training camps, according to the 9/11 Commission Report, but the missiles missed bin Laden and his top lieutenants. During a discussion of possible follow-up strikes, Deputy National Security Advisor James Steinberg reportedly said the attacks in Afghanistan offered "little benefit, lots of blowback against bomb-happy U.S." Weeks later, Gingrich changed his mind and described the one-off attacks as "totally inadequate."

It is impossible to know precisely how the strikes in Sudan and Afghanistan affected al-Qaeda’s organization, but in an interview with Al Jazeera in December 1998, bin Laden hardly discussed the bombing. “Our duty -- and we carried it out -- is to rouse the nation for jihad against the United States, Israel, and their supporters for the sake of God. We continue to move in the direction of instigating people,” he said. Later, Pres. Clinton told a group of businessmen in Australia that he could have killed bin Laden with another strike month later, but decided against taking action because of the potential of high civilian casualties. Pres. Clinton made those remarks on Sept. 10, 2001.

It is unclear what the consequences of President Trump’s actions will be, and how Assad and Russia will react. The Defense Department said that it had alerted Russia to the strikes ahead of time and took pains to "minimize risk to Russian or Syrian personnel located at the airfield." The U.S. military also did not claim to have hit Assad's chemical weapon stores at the airfield, but hit aircraft and support infrastructure instead. The military said the strike likely reduced the Syrian government's "ability to deliver" the chemical agents.

What happens next is anyone's guess, but President Trump is well-aware of critics who say deepening America's military footprint in Syria is a fool's errand. "What will we get for bombing Syria besides more debt and a possible long term conflict?" Pres. Trump wrote on Twitter in September 2013, in a string of tweets warning then-President Barack Obama not to commit military forces there.

Lee Ferran is a freelance reporter based in Atlanta.