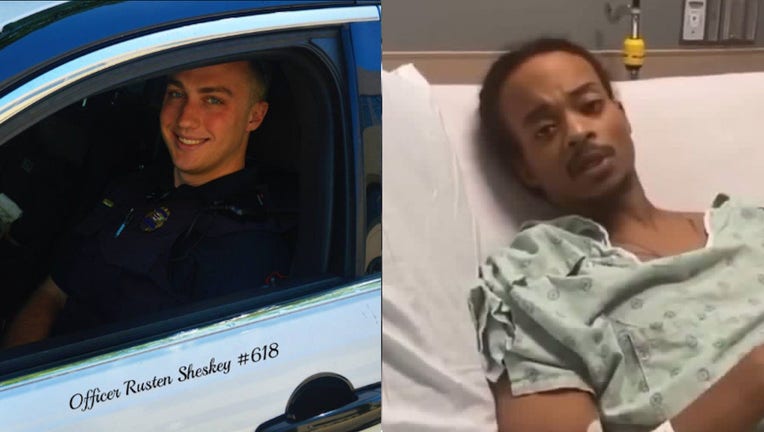 CHARLOTTE, N.C. - Members of Jacob Blake’s family attended a rally in Charlotte on Sunday, calling for an end to a “vicious cycle of hate” nearly a month after Blake, a Black man, was shot seven times by a white police officer in Kenosha, Wisconsin.

Those comments came from Blake’s sister, Letetra Widman, as she spoke in front of a crowd of more than 150 people at a park in the city, The News & Observer reported.

“I’m tired of this vicious cycle of hate,” Widman said. “I’ve been Black for 31 years and I still can’t figure out why that makes people mad.”

Her brother has been paralyzed from the waist down due to the shooting, which was captured on video and posted online, sparking several nights of protests and unrest in Kenosha since Aug. 23.

“If some of us do not count, none of us counts,” Jacob Blake Sr., a Charlotte resident, told the crowd on Sunday. “I refuse to accept the fact that in 2020 I have to prove my son is a human being.”

Two other Black men who died in Charlotte four years ago, Keith Lamont Scott and Justin Carr, were also remembered during the rally. Scott was fatally shot by a police officer and Carr was killed during a protest following Scott’s death.

The crowd then marched to a Black Lives Matter mural in the city.

Mike DeVaul, a YMCA executive in Charlotte who grew up with Blake Sr., says Jacob Blake Jr.'s life is still a cause for celebration. “We should celebrate the fact that he is living,” the newspaper quotes DeVaul as saying. “not dead as so many others are.”

The family of Anthony Huber, a 26-year-old Silver Lake man killed during the Kenosha protests, released a statement through their attorney.

The school district apologized and is investigating the assignment that also listed Joseph Rosenbaum, one of the protesters Kyle Rittenhouse is accused of killing.

Kenosha's fire chief says damage from the unrest over the police shooting of Jacob Blake has now topped $11 million.