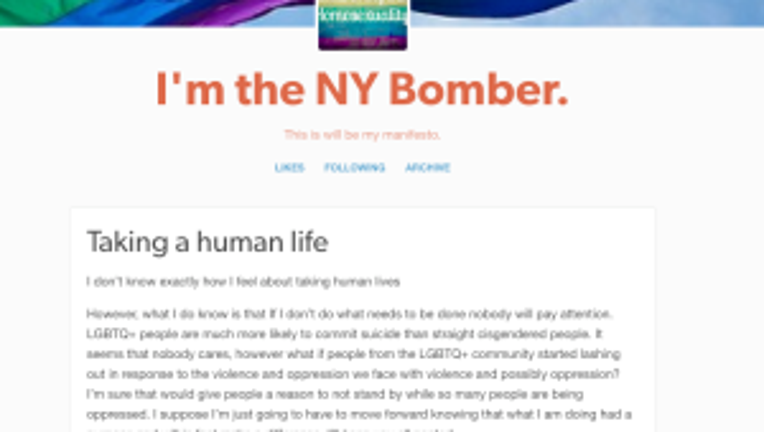 NEW YORK — A manifesto by an individual claiming to be responsible for detonating an explosive in Chelsea, New York Saturday, September 17th, injuring 29 people, has been discovered online and police confirmed Sunday they are now investigating its validity.

The investigation is in its early stages, and the primary concern is credibility behind the posting titled, “I’m the NY Bomber: This is will be my manifesto,” sources tell FOX6's sister station PIX11.

The individual titles two posts, “Taking a human life” and “Manufacturing Test Explosives,” and claims the reason for Saturday night’s attack is bringing attention to issues surrounding those who are lesbian, gay, bisexual, transgender and queer or questioning.

Below is an excerpt from the posts:

You probably have all seen the news by now. The explosives detonated in New York City, that was me. Those were just some tests. I know where I have made errors and I will not make the same mistake next time. I did it because I cannot stand society. I cannot live in a world where homosexuals like myself as well as the rest of the LGBTQ+ community are looked down upon by society.

The alleged manifesto was pulled offline within 45 minutes of PIX11 publishing a story.

The FBI is aware of the posting, and is working to determine its authenticity, the Associated Press is reporting.

The explosion in Chelsea, New York at West 23rd Street injured 29 people and caused “significant damage” to the area.

While the incident was “obviously an act of terrorism,” no links to any international groups have been found, Gov. Andrew Cuomo said Sunday.

An investigation continued into the motive behind the attack.

Meanwhile, a second device was found inside a plastic bag blocks away, and it appeared to be a pressure cooker with wiring and a cellphone attached to it. A robot removed the device safely.