NEW PORT RICHEY, Fla. - You can call Florida Highway Patrol Trooper Toni Schuck a hero, but she says she was just doing her job.

"I was sworn to protect and that’s what I felt I did. Hero, that’s just a title," Schuck told reporters Thursday. "If that’s what they want to say then that’s great. I just feel that what I had to do. I didn’t want to do, but I had to do it."

On Sunday morning, Schuck was working for the Skyway 10K. As nearly 7,000 runners crossed the bridge, she heard a radio call, saying a driver hadn’t stopped for the road closure.

"At that point, I was facing northbound. At that point I turned my car around and faced southbound," she said.

FHP Trooper Toni Schuck became emotional when she recounted the split-second decision she made to drive her patrol SUV right into the path of a suspected drunk driver, knowing she was the last line of defense to keep the speeding driver from reaching thousands of runners participating in the Skyway 10K.

The car was a BMW. Troopers say 52-year-old Kristen Watts of Sarasota was behind the wheel and kept going through the barricades.

"In my mind I’m thinking she’s going to stop. We have another check point she will stop at," Schuck recalled.

But Watts didn’t. Instead, she blew past cones, barriers and law enforcement officers.

Florida Highway Patrol released interior view of Trooper Toni Schuck's Tahoe when she put herself in between a speeding DUI suspect and runners in the Skyway 5K Sunday.

Instead of letting Watts get onto the Skyway Bridge, Trooper Schuck veered her Chevy Tahoe into her path -- knowing she was the last line of defense to keep the suspected drunk driver from endangering the lives of the runners on the bridge.

The impact crushed both vehicles, ending both Watts and Schuck to the hospital. Trooper Schuck said she was able to walk from her patrol vehicle to the ambulance before the pain kicked in. As she was transported over the Skyway, she became emotional seeing runners on the bridge. 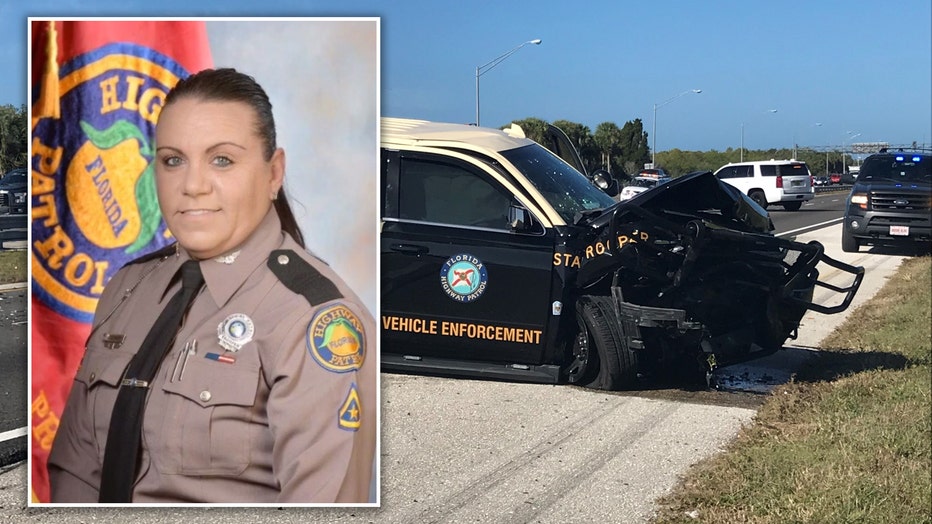 "I saw people still there and it really overwhelmed me. It was just a situation where I knew there were people there and I’m thankful it was me. I’m thankful she didn’t get past me," Schuck said with tears in her eyes. "Of course in our jobs we are to protect and serve, and even on her behalf."

Dashcam video from Florida Highway Patrol Master Trooper Schuck's Chevrolet Tahoe shows the moment she maneuvered her patrol SUV to stop a speeding DUI suspect who had driven around barricades from reaching thousands of runners participating in the Skyway 10K race.

Watts was booked into the Manatee County jail and faces multiple charges for DUI.

Troopers say she was driving drunk. Her blood alcohol level at the hospital registered at .271 -- over 3 times the legal limit of .08. 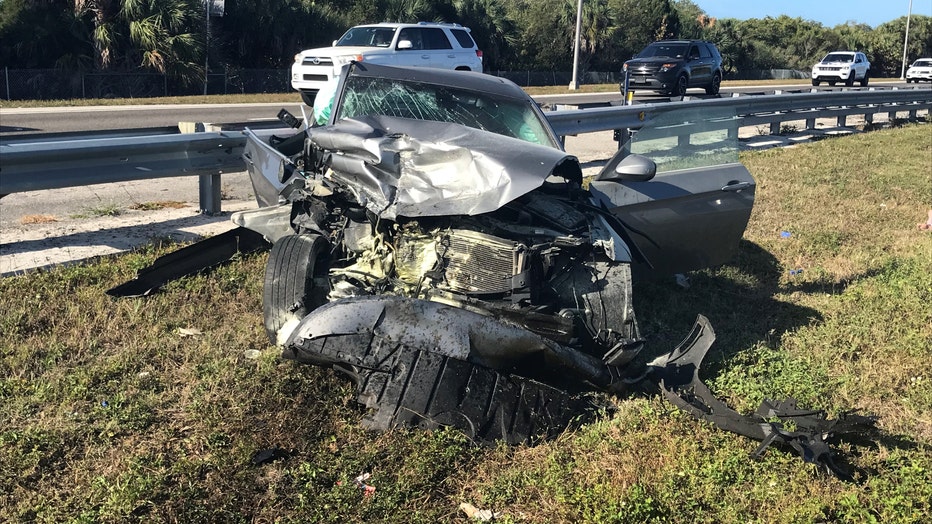 Six hours later at the Manatee County Jail it was still above the legal limit, registering at .094.

Schuck credits her survival to two things: her department-issued Chevy Tahoe and a guardian angel.

She will be out of work until she can heal, but says she has every intent of returning to the Florida Highway Patrol, a job she’s held for 26 years.
With multiple family members in law enforcement, she says service runs through her blood and heart. While she doesn’t call herself a hero, her act of courage speaks for itself.

"I’ve never been in this position where I’ve had to put myself for somebody else. Every day since it’s happened, I’ve thought about it. You go through the what ifs," Schuck said. "But I was the last officer, I knew that. I knew it was me. So if it wasn’t me to get her to stop, then who? I don’t know."